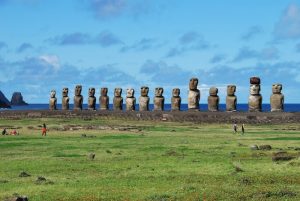 The Stillness. The magnificent Moai. The waves crashing behind. The wonder of how the Moai were built, how the were moved around the island and the history of the island deeply impacted me when I visited Easter Island.

Easter Island sits more than 2,200 miles off the coast of Chile. Much of the history of the island is tragic and the rest not fully understood. The Moai were created more than 1,000 years ago. The monuments weigh 50-80 tons. The red topknots on the hats weigh 5-10 tons. No-one understands how or why the Moai were moved all over the 15 mile-wide island. Many are sacred burial sites. There is a quarry with dozens of unfinished Moai. 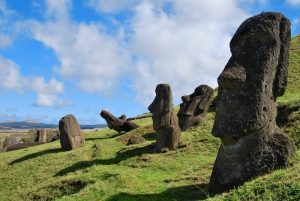 Over the course of its history, the island was deforested, raided (in the 1800s) for slaves by the British who then returned slaves infected with smallpox to the island and turned into a sheep farm by the British company Williams and Balfour. At one point the population of Easter Island was reduced to 110 people. In 1964, the Rapa Nui finally obtained full political rights. When we were there in 2011, most of the island still did not have electric or running water.

Missionaries tried to convert the Rapa Nui to christianity, but the islanders created their own version–the birdman religion.  Every year, there was a completion to select the tribal chief for the year. The island’s best warriors competed to bring back the first egg of the sooty tern. The competition amounted to a life and death triathlon that included scaling a 1000 foot cliff, swimming to an island 1.4 KM away, finding the first egg and retracing their steps to bring the egg back unbroken. 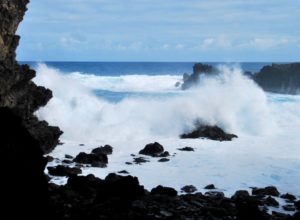 Waves are eroding the Island due to climate change.

What I learned from Easter Island

Easter Island is a beautiful, wondrous place with a tragic history–some self-inflect, some a result of European plunder and exploitation. The deforestation of the island is considered by many to be an environmental lesson. Jared Diamond’s best-selling book, Collapse, details this. Now, our destruction of the environment worldwide is another chapter in this story. There is a proud history that the descendants of the Rapa Nui claim and treasure. Climate change will likely destroy much of Easter Island. It will be a loss to us physically and historically. We need to figure out how to support the Rapa Nui people and ourselves to learn how to go forward with these changes.

FOLLOW US ON INSTAGRAM
1 shares
We use cookies to ensure that we give you the best experience on our website. If you continue to use this site we will assume that you are happy with it.OkRead more