In the Water with Penguins, Whales and Seals—Kayaking in the Antarctic

Kayaking in the Antarctic-The Adventure Begins

The seas were calm with a light wind as we transferred from the zodiac to our kayaks for our first kayaking in the Antarctic adventure near Barrientos and Cecilia Islands in the Southern Atlantic ocean. While in the zodiac, Shaz, our expedition leader, reminded us that we should keep 300 meters from glaciers, 100 meters from whales and not to touch any penguins. We were excited and eager to get our first paddle under our belt.

I slid off the zodiac into my kayak with my partner Jeanine as the navigator. We began to paddle and get a feel for the kayak, the water, our teamwork. Suddenly someone shouted and pointed. We saw the spout of a whale just a few meters away. Wait. There are TWO hump back whales. We grabbed whatever cameras we had to try to capture the moment. Cameras were not really necessary. The experience itself was amazing—to be in the water with a whale.

The first twenty minutes of kayaking in Antarctica was to be followed by countless other experiences. More humpbacks. The elusive Minke Whales in Cierra Cove. At Errara Channel near Danco Island, a curious Minke circled us. We excitedly watched, guessing where the whale would come up again and wondering how close it would come.

In the Water with Penguins

Kayaking in the Antarctic: Penguin on Ice

We didn’t need to guess how close the penguins would come. They were everywhere. Right next to us—under the water, over the water, swimming, diving, splashing, jumping on and off icebergs, hoping unto the land. It was as if we were part of the family. This was one of the most exquisite experience of kayaking in the Antarctic—being intimately connected to the water and the life of the sea. We had amazing views of the penguin colonies from the sea. We saw Gentoo, Chinstrap, and Adelie, often staring at the water, deciding whether it was safe to enter. Sometimes they stood for 20 minutes, at the water’s edge, seeming to talk amongst themselves.

We paddled in the snow (a first for me), brash ice, in the wind, in waves and in stillness. We saw a Glacier calve in a distance. The sound was thundering. We were awestruck by the size and beauty of the glaciers. Kayaking in the Antarctic was a humbling experience.

Kayaking in the Antarctic-Seal on Iceberg

The seals were also in our “living room.” Rather, we were in theirs. On our first day, we saw Elephant seals lying on an island going through catastrophic moult. They cannot go in the ocean during that process and these massive animals were lying on the rocky island. Wendell seals greeted us in Mikkelsen Harbour and a crabeater seal lounged on a small iceberg near Danco Island. Penguins tried to get on the iceberg before noticing the seal and quickly departing.

Near Jougla Point, we started paddling at 9 pm after our unsuccessful attempt to sail through the Lemaire Channel (it was blocked by icebergs see my previous post). There were massive chains on rocks from old whaling stations. We paddled by Port Lockroy. Then, Shaz paddled fast and launch her kayak onto the fast ice. Fast ice is ocean water that has frozen and extends out from the land. We all soon followed and were rewarded with hot chocolate—a great treat for a cold evening. There was much laughter. Soon enough, the expedition team pushed us back into the water to continue our evening paddle.

The next day, the weather was too rough for kayaking and Jougla Point turned out to be our last kayak. We left with a few sore muscles, the memory of the sea, the penguins, the ice and the joy of having been a part of it.

Want to see some penguins in action: Adele Penguins Making the Plunge

Does this make you want to go Kayaking in the Antarctic? What’s your dream adventure? 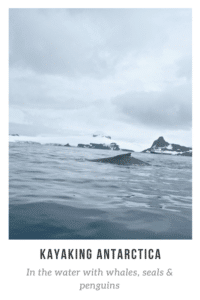