How to Survive Poya Day at Anuradhapura Ruins

Poya day in Sri Lanka at Anuradhapura Ruins. This is Ruwanwelisaya Dagoba.

I had been trying to convince Reggie for many years to visit Sri Lanka. We were finally going. We love temples and historical sites so we wanted to learn about the ancient Anuradhapura Kingdom. Our trip started with several days in the Cultural Triangle at the Anuradhapura ruins in Sri Lanka.

The cultural triangle is in the center of the island and includes Anuradhapura, Polonnaruwa, Sigiriya, Dambulla and Kandy/the Temple of the Sacred Tooth Relic. They are all UNESCO World Heritage Sites and we planned on seeing them all.

We arrived in Colombo and spent the night. Unfortunately, we didn’t have much time to see the many places to visit in Colombo before setting off for the Cultural Triangle.

In ancient times, Anuradhapura had extensive palaces and dagobas (also called stupas) that were 9 stories high. The main street was 16 miles long. There were numerous palaces and mansions. The Anuradhapura sites are spread out over a large area.

Key Sites to See in Anuradhapura

The key sites to see in Anuradhapura are the:

The Bodhi Tree is said to have grown from a cutting from the sacred tree in India that the Buddha attained enlightenment under. 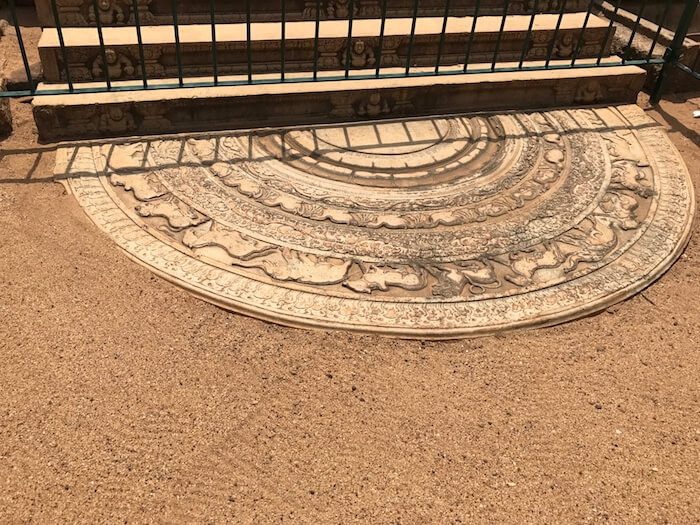 Founded in the 2nd century BC, Abhahagiri Vihara was the most important monastery in ancient Sri Lanka and the Anuradhapura kingdom. It remains one of the most sacred pilgrimage sites to this day.  It was a seat of learning for all schools of Buddhist thought. The Moonstones are exquisite and were are the entrances to buildings.

Ruwanwelisaya Stupa was built by King Dutugemunu and completed in 140 BC. It is also known as the white Stupa and stands at 330 feet tall with a circumference of 950 feet.

Jethawanaramaya Stupa was built by King Mahasena between 273-301 AD. When it was built it was said to be the tallest stupa in the ancient world with a height of 400 feet.

Mihintale was our last stop and involves many, many steps. It is a short drive from the other sites in Anuradhapura. There are many steps carved into the mountain that allow pilgrims to climb up to the top of the stupa. We started the climb–but it was so crowded it would have taken too long to get to the top. Hundreds of thousands of feet have worn down the steps and they are a little scary. There is a fence to hold onto for part of the climb.

We only had one day for Anuradhapura so were hoping to see as much as possible. As we got closer, the traffic started to get heavy. We saw hundreds of families in all manner of transport. Some walking. Others on three-wheelers. Some on motorcycles and bikes. From the very elderly to infants in their parent’s arms, every age was represented. Many were dressed in all white and often barefoot.

We asked Champika, our driver and guide, what was happening. He told us that it was Poya Day. Poya Day in Sri Lanka happens once a month in the morning after a full moon. Everyone goes to pray on Poya Day. And, we mean EVERYONE. It seemed like the entire country was going to the same place as us. Sri Lanka is 70% Buddhist and many businesses are closed on Poya Day.

Families arrive early in the morning and most don’t leave until dusk. Along the path to the Temple, there were tents with free food for the devotees and pilgrims. Many families were eating, sleeping and generally resting in between their pilgrimages to the dagobas.

Visitors to these sacred grounds must remove hats and footwear. Many people arrived barefoot. Other people left their sandals and flip flops on the ground at the entrances.

Devotees carry a bunch of fragrant flowers as offerings to their gods. They walk around the stupas several times praying.

There were booths for leaving your shoes for safekeeping for a small fee and we elected to use them. It was 90 degrees and our feet weren’t ready for the hot stones.

The site of the Sri Maha Bodhi tree was very crowded. This sacred tree grew from a cutting brought from Bodhgaya in India. High security surrounds the sacred oldest tree in the Sri Lankan Buddhist world. People offered up robes & bowls for the monks in exchange for blessings.

In order to see the full site, you need several days. We had only one. And, a crowded one at that. But, we had the chance to experience Poya Day.

How to Survive Poya Day at Anuradhapura Ruins Sri Lanka

We saw Poya as a privilege to experience. It is a very important day for Sri Lankans and we were there with them. Some tips for experiencing Poya Day:

Mostly, let yourself enjoy the experience of traveling and getting to know the people and a country.

Don’t miss spending time in Colombo either at the beginning or end of your trip. Here are some great things to do in Colombo.

For some of our other Sri Lanka Adventures, check out:

Cows, Cars and Elephants Oh My: Driving in Sri Lanka 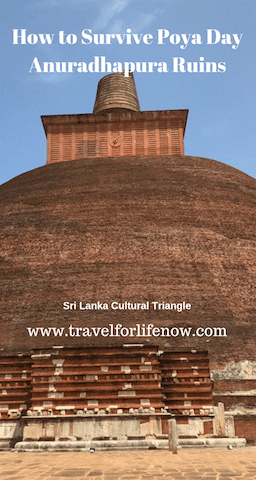 Have you been to Sri Lanka? Want to go? Leave a comment.

FOLLOW US ON INSTAGRAM
262 shares
We use cookies to ensure that we give you the best experience on our website. If you continue to use this site we will assume that you are happy with it.OkRead more