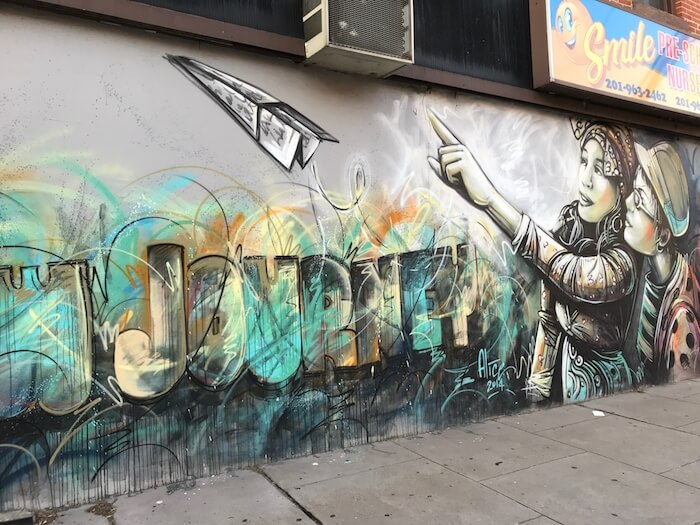 New Journey Mural by Alice Pasquini 276 First Street near Grove Street. This is part of a series of 3 murals–the other 2 are in Rockaway Beach and Inwood NY

When you think about a day of street art, Jersey City Street Art probably is not at the top of your mind. You’re probably thinking about going to New York City to Bushwick or Harlem or the Bronx. For more on NYC street art, you can read my post: Bushwick Street Art and The Bushwick Collective. You might even be thinking about Philly street art. If you only go to NYC or Philly, you will miss out on the fantastic Outdoor gallery of Jersey City Street Art. You’ll also be missing out on many other New Jersey Street art locations like Newark, Asbury Park and elsewhere.

Jersey City street art is being created all over the place. There are hundreds of murals and tags–both “officially sanctioned” and unofficially painted. And, tags and graffiti are in many spots as well. It is short ride on the PATH train to get to the heart of Jersey City to see amazing street art.

Where to Go to See Jersey City Street Art

While there is street art all over Jersey City, some of it is more accessible via mass transit than other places. The most accessible Jersey City street art is in downtown Jersey City, Grove Street and Jersey Heights. There are also some stunningly large murals right outside of the Holland Tunnel.

In the past 5 years more than 70 murals have been painted. These murals have been painted by well-known local, national and international artists from around the world–Eduardo Kobra (Brazil), Shepard Fairey (US), Pixel Pancho (Italy), Fintan McGee (Australia), Faith47 (South Africa), Case Ma’Claim (Germany) and local artists Distort, Mustart, Mata Ruda, Fermin Mendoza, Catherine Hart and others. 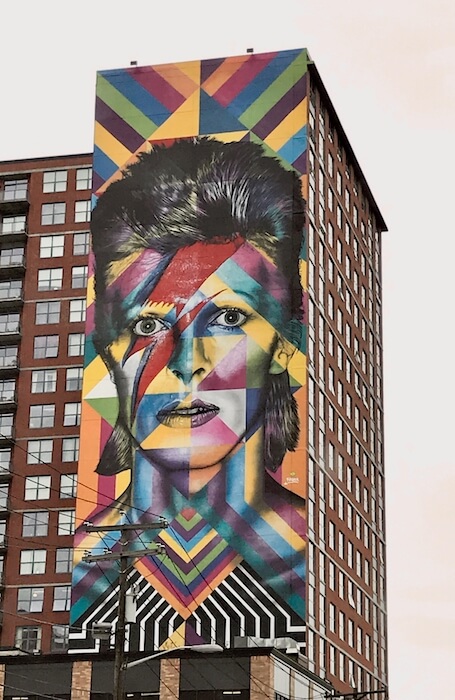 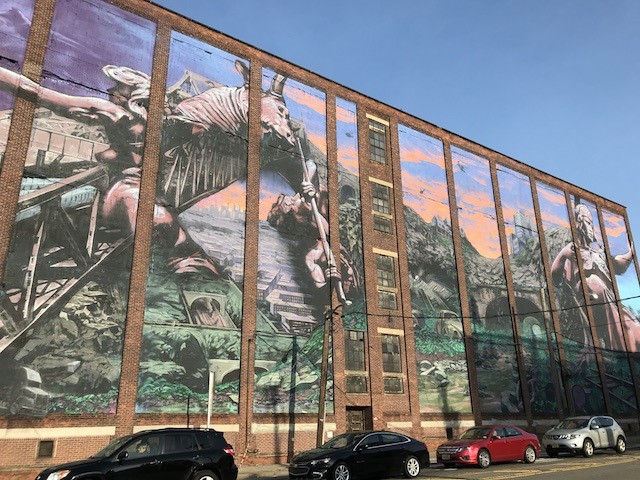 Kingdom by Distort is massive mural at 580 Marin Blvd. near the Holland Tunnel.

Recent two very large murals that have been painted by Kobra and Distort right near the Holland Tunnel. Kobra is a Brazilian street artists who has painted all of the world. The kaleidoscope effect is his signature. It was painted right after Bowie died and is 180 feet tall. Many murals in JC are very tall.

Distort spent 40 days painting Kingdom, a massive mural telling the industrial history of Jersey City on Marin Blvd, near the Holland Tunnel. It is 200 feet by 80 feet and is believed to be the largest mural in New Jersey. Green Villian organized the project with funding from the Jersey City Mural Art Program. Mecca and Sons Trucking owns the 100 year old building.

Pawn (Shaun Edwards) is a Jersey City artist. He has been active in JC for the past 15 years and has some very creative and political murals. You will see another one his murals in the last section.

Want to hear directly from a street artist? Read my series Street Art Speaks: An interview with Street Artist and Activist LMNOPi. 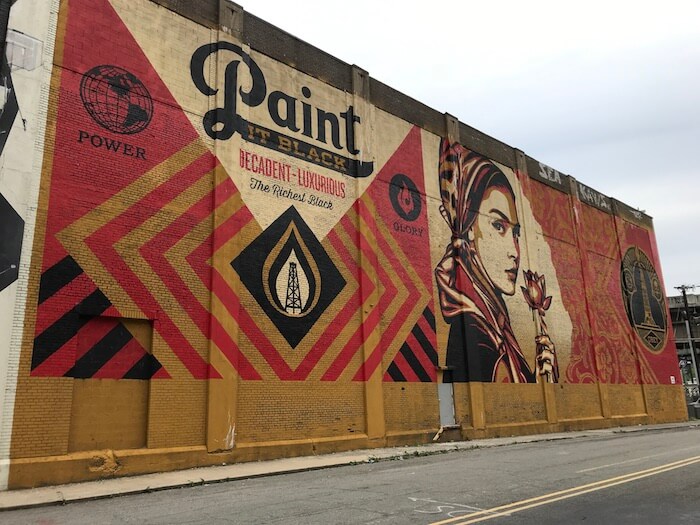 Natural Springs by Shepard Fairey. This mural is below 139 near the Holland tunnel.

A few blocks away just south of the entrance to Rte 139, you will find another series of murals.

It’s tucked away, almost under 139 ramp and would be hard to find if you were not living in JC. Among the artists in this spot are Sipros, Shepard Fairley and Pawn.

Shepard Fairey has two murals in Jersey City. The most recent is Natural Spring under route 139. He is most known for creating the Obama 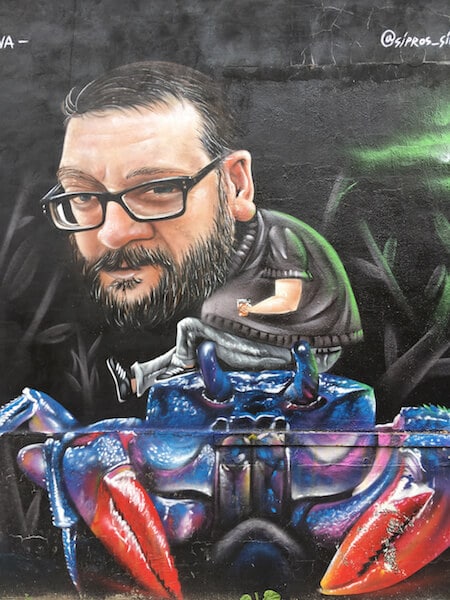 Hope 2008 poster. Fairey was one of the founders of Graffiti Park in Austin, Texas (see my post on Graffiti Park.). A few years ago, he painted The Wave in Downtown Jersey City as a nod to Jersey City’s relationship to the water and the new cultural wave in the City.

Sipros is a Brazilian street artist. He also has painted with The Bushwick Collective and all over the world. If you drove through the Holland Tunnel before the Presidential election, you may have seen his Trump as the Joker (from Batman) mural. 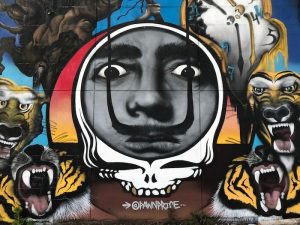 Pawn is a local Jersey City Street artists who has painted all over the City.

There is a lot of art in and around Grove street, particularly near the pedestrian plaza. Below are four murals that I like–one by Case Ma’Claim and the other by Fintan McGee. The mural at the top of this post by Alice Pasquini is also in this area. 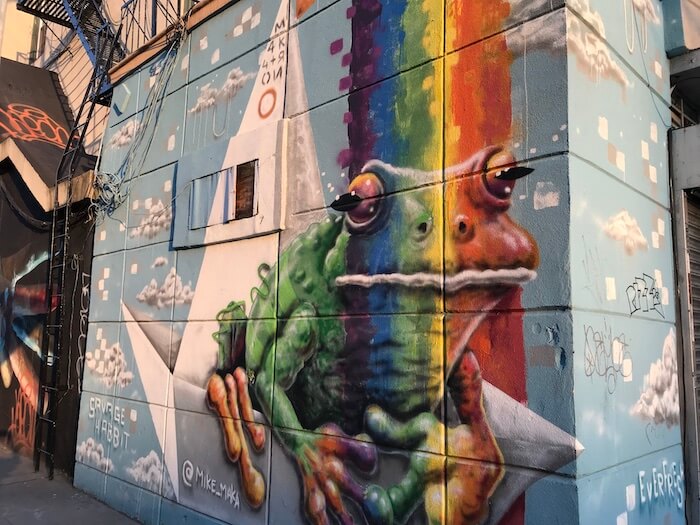 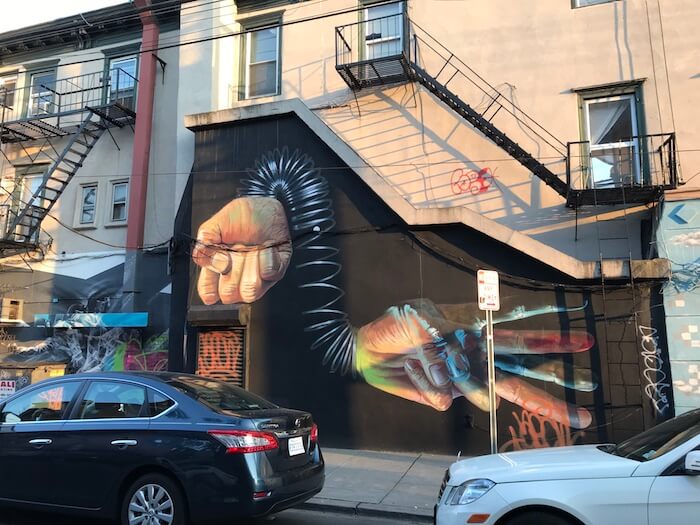 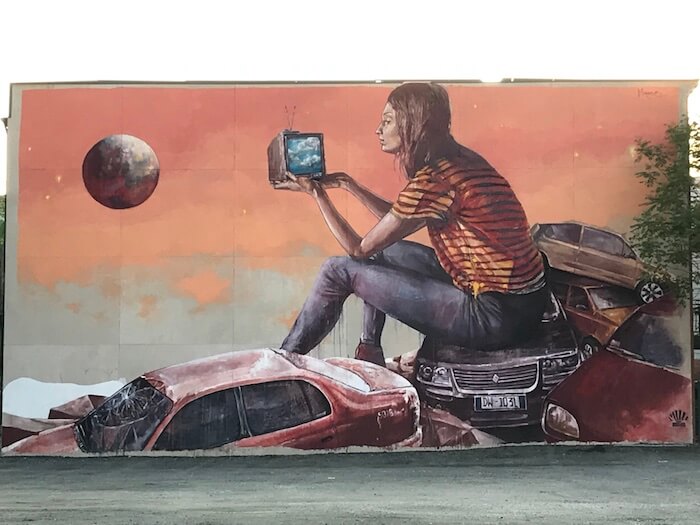 Case Ma’Claim (Andres Von Chrzanowski) is a German artist who often paints hands in a style that combines surrealism and photorealism. He has been a leading street artists since the mid-1990s.

Fintan McGee is from Australia and often paints murals with an environmental theme. This mural is a little out of the way, but very worth seeing. He has works in Buenos Aires, Bogota (Columbia), Baton Rouge, Miami, Jakarta, and Ireland. McGee is often compared to the legendary street artist Banksy.

Born in Russia, Mustart (Ivan Petrovsky), has lived in the US since he was 14. He has murals all over JC. The name Mustart is a way of saying that he must do art everyday.

Mike Maka is another artist that is all over JC. This frog mural is near Grove Street. He is based in Australia and has had shows and murals all over the world.

Jersey Heights has a great deal of street art. You can get there by a long uphill walk (or a long flight of stairs). Alternatively, the light rail and buses go there.

If you elect to walk, you’ll want to take the PATH train to Hoboken and then walk up 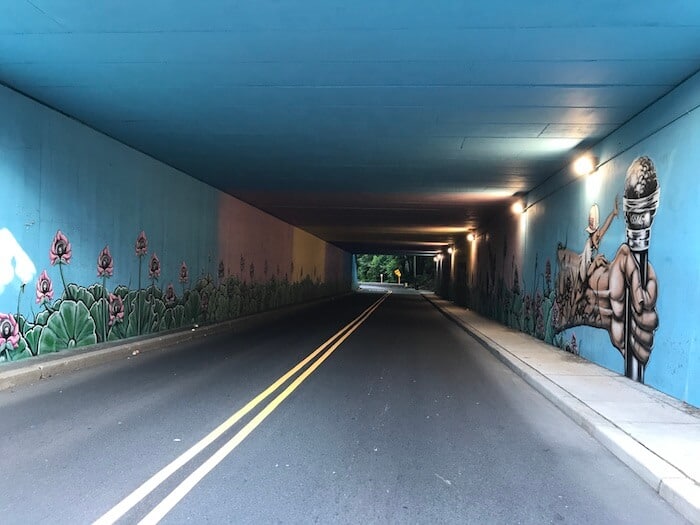 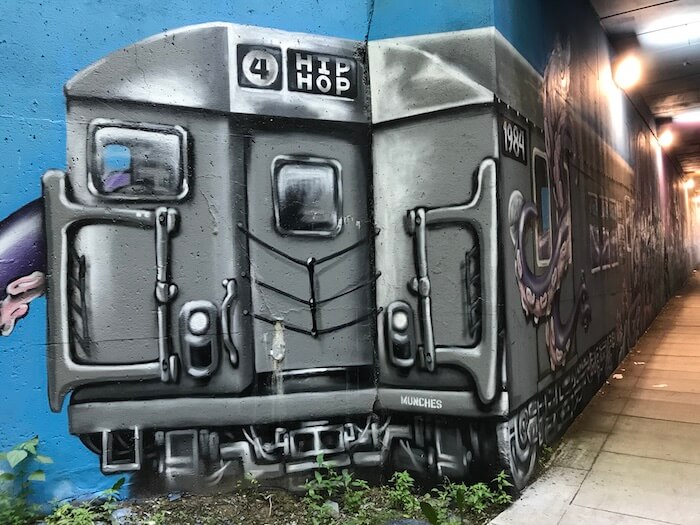 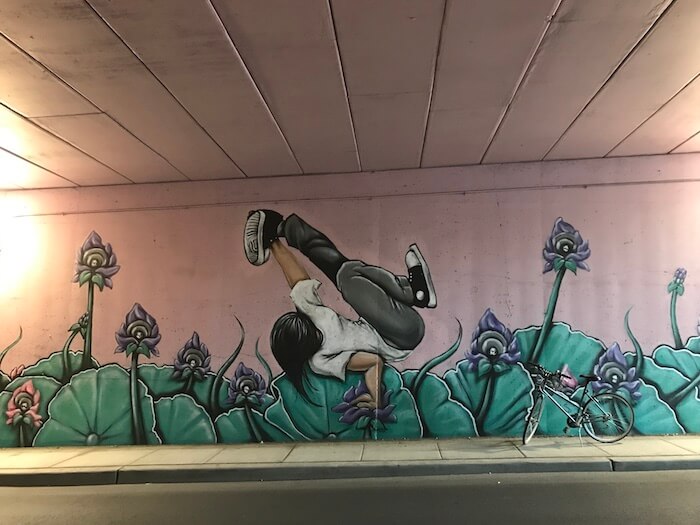 Ravine Road (also know as New York Avenue). On that route, you’ll pass through Hip Hop Tunnel. This is a tunnel that is covered in street art from the entrances to the inside. It was painted by Will Power and it 150 feet long. It is amazing to see. 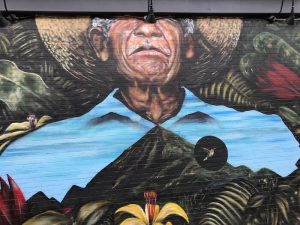 Mata Ruda is a Costa Rican immigrant This is in the Heights at 211 Bay Street.

Mata Ruda is a local artist. In this mural, he depicts an anonymous immigrant by only showing the bottom half of his face.

Originally from Costa Rica, he came to the US by way of Venezuela. His work is on display in the Newark Museum, El Museo Barrio (Harlem) and in street art murals in Russia, Puerto Rico, Ukraine and Mexico. 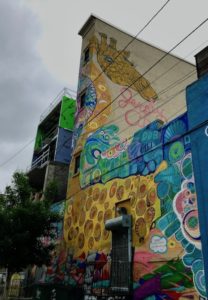 Downtown Jersey City is full of street art. Catherine Hart is a local street artist from Jersey City by way of California and Austin, Texas. The Giraffe mural is whimsical and fun to see. Catherine  has worked on murals in Kentucky, Texas, Tennessee, Kansas, New Jersey and North Carolina. 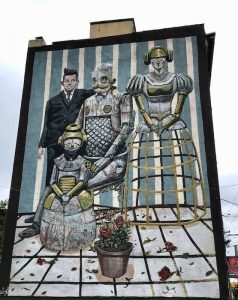 Pixel Pancho is an Italian Street artist who paints internationally. His signature is robot characters. Reportedly, he depicted himself in the painting as the robot boy/black sheep.

Beau Stanton is originally a California native now based in Red Hook Brooklyn.  Jersey Crown portrays some of the iconic buildings of JC–the old city hall, powerhouse, the railroad terminal. He has painted mural in Bushwick as well.

Gaia grew up in NYC but is now based in Baltimore. He has done murals on all 6 continents. This mural was controversial because he painted over another existing mural that was peeling. 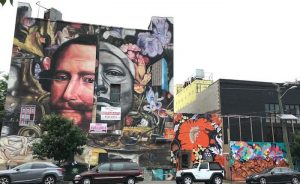 Where Did All This Art Come From?

Graffiti and street art have been in Jersey City for decades. Most of it was illegal, some of it very beautiful, some of it political, some personal and others resisted categorization. In 2013, Jersey City was in the midst of widespread gentrification and the City wanted to support this effort. Along came the Jersey City Mural arts program. 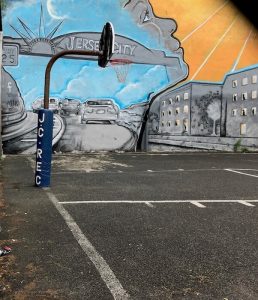 The program was funded by a Clean Communities grant which also supported an anti-littering initiative called Stop the Drop. It was also part of the Keep Jersey City Beautiful program. It’s stated goals are to cut down on graffiti, beautify neighborhoods and involve the local community. Many people would like to see the community more engaged in the location and development of the mural arts program. In addition, it is reported that graffiti artists who are caught “in the act” by the police are required to do community service with the Mural Arts program. Setting up street art in opposition to graffiti is problematic politically as well as a fruitless tactic. 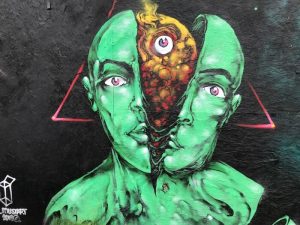 Savage Habbit Murals Project and Green Villian are also players in this arena. Savage Habbit’s stated goal is to strengthen the dialogue between the local communities through public art. There are many Savage Habbit connected murals in Jersey City. Green Villian is a group of social entrepreneurs that came together in 2009  in the old Clorox Bleach factory in Jersey City. They now have an art gallery and often collaborate with the Jersey City Mural Arts program. The Kingdom mural was a project that they organized.

There is the street art in other areas of Jersey City. Ashbury Park has a thriving street art scene. Newark Street Art boasts the largest mural in the country along McCarter Highway. Camden, Hoboken, Union City and many other places have growing street art communities.

Getting to Jersey City 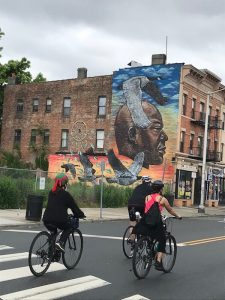 There are buses from Port Authority in New York that go to Hoboken and places in Jersey City. By car, Jersey City starts right after you exit the Holland Tunnel. There is a good online map of street art in Jersey City on the Jersey City Mural Arts Program website. Their list there is not exhaustive and only includes the projects that the City has sponsored.

My favorite way to see street art is to wander around and get lost. Or, ride a bike and see what you see. This is how I’ve stumbled upon many of the street art murals depicted in this post. I hope you come by and experience Jersey City Street Art.

After you’ve seen Jersey City, drive over to Newark for some more intersting street art, museums and food.

If you are interested in seeing street art internationally, see my post on Hungary and its street art in The Best of Budapest 4 Day Itinerary 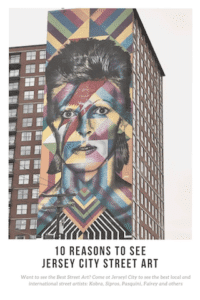 FOLLOW US ON INSTAGRAM
258 shares
We use cookies to ensure that we give you the best experience on our website. If you continue to use this site we will assume that you are happy with it.OkRead more