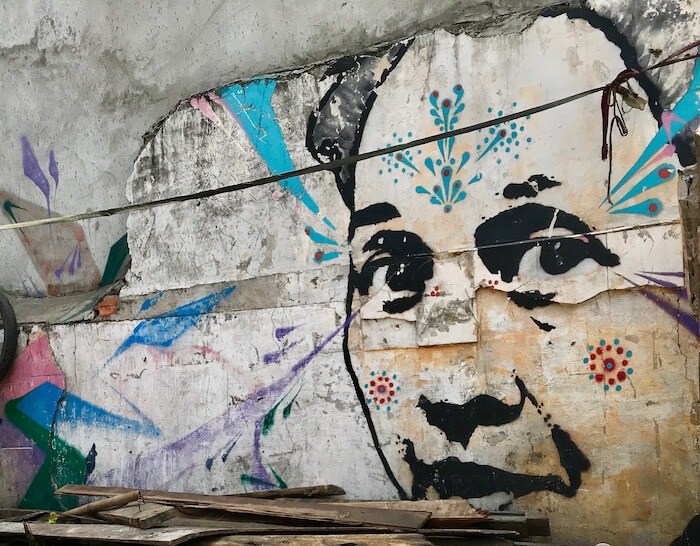 We have tracked and covered street art and artists in many cities—New York, Budapest, Jersey City, London, Paris, Penang, Hanoi, Singapore and elsewhere. While visiting Phnom Penh, we wanted to find Street Art. It was one of the most challenging places to find murals.  The Street art community is in the process of emerging in Phnom Penh. And, it is growing in a very interesting direction that engages Khmer symbolism and history. It is exciting to see how Cambodian street artists are creating their own version of urban art. The best two places to start looking for Phnom Penh Street Art are Boeung Kak Lake & Street 93 and behind the French Embassy.

This post contains Affiliate Links. We receive a small commission if you use our link. It doesn’t cost you any extra and helps us to maintain this site.

Street 93 in the Boeung Kak District is the most known place for urban art in Phnom Penh but there are also murals scattered throughout the City.  There is another area in the Boeung Kak area behind the French Embassy that has urban art. We found a small third area near Meta House on Samdach Sothearos Blvd. Since there is a lot of construction going on in Phnom Penh, many of the places that were full of art have been torn down and many murals have disappeared. 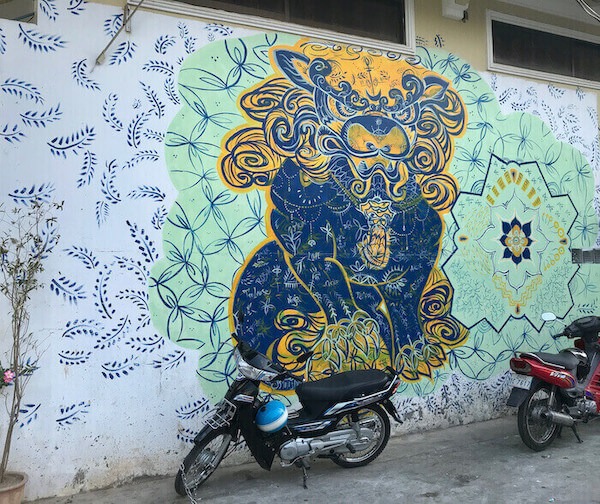 Cambodian street artists have been painting on and in the abandoned buildings in the area behind the French Embassy. It is interesting to see local artists begin to create new forms of urban art and murals in Phnom Penh. This area needs to be visited carefully and thoughtfully as it is a poor area of Phnom Penh.

Many street artists are beginning to paint inside businesses and some of the best-preserved murals can be found there.

Street art in Phnom Penh has been developing slowly over the last decade. There are international artists as well as local artists leading this development. Below are some of the people and events that are helping to make this happen. 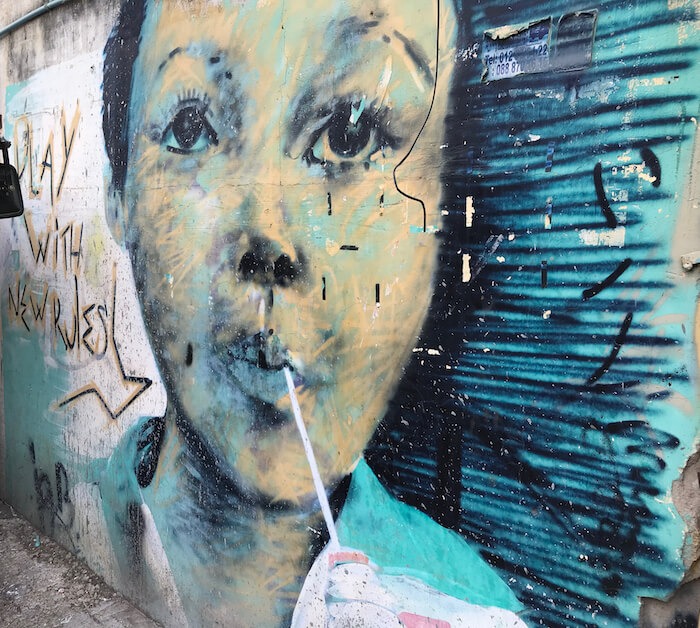 The Boeung Kak Lake District was a large residential and commercial area surrounding a lake. In 2010, the Cambodia government filled in the lake to make way for a new development. Many residents and businesses were forced out. The promised development never happened, leaving the area poor and marginalized.

Four years later, Marj Arnaud and Ludi Labile opened Simone’s Bistro and Art in Boeung Kak on Street 93. They invited artists to begin to paint on Street 93. Their vision was to turn Street 93 into a street art village as a way of revitalizing the area. The café has since closed, but Street 93 remains a center of street art. There are murals up and down the street and on some of the side streets.

Local residents have mixed feelings about the art. Some are indifferent. Others like the images. Some dislike seeing tourists come in taking pictures. Others park tuk-tuks and hang laundry in front of murals and otherwise ignore the work. 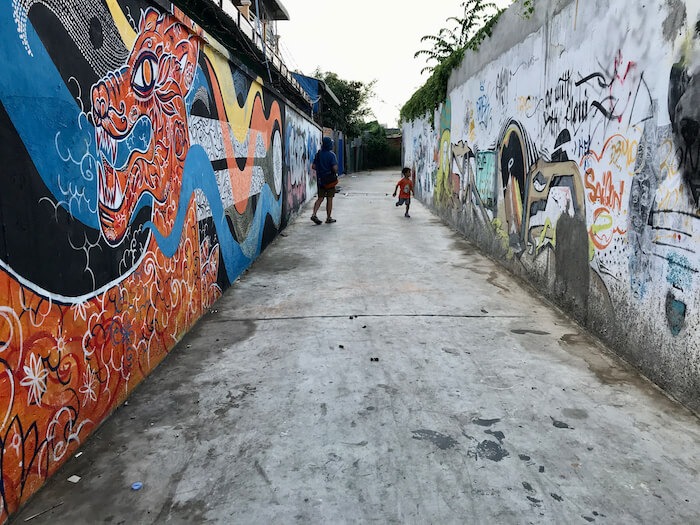 Alleyway with art off Street 93

Phnom Penh Street art has been cultivated through the Cambodia Urban Art Festival. The Festival was founded by French street artists Chifumi and Theo Valier. Some of those murals from the festival can still be found, though others have since disappeared. Last year’s festival had to be canceled due to lack of funding. We hope 2019 will bring it back.

Cambodia’s first female street artist was Lisa Mam. She is a dentist and a painter. She was the first Cambodian woman muralist and helped to inspire other young women to start painting. Lisa and her partner New Zealander/Cambodian Peap Tarr have been helping to inspire the next generation of Phnom Penh street artists. 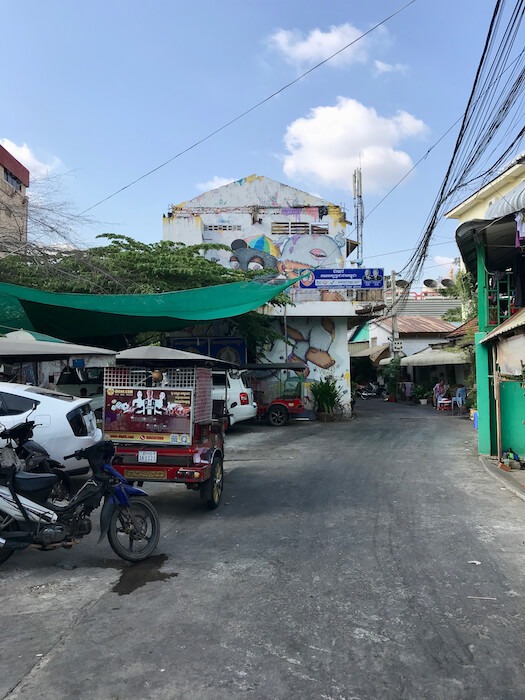 One of the best areas for street art is near the Al Serkal Mosque (1 St. 86). The Mosque is the largest in Cambodia and is worth seeing before you start the street art tour.

To get to the street art, face the Mosque and walk to your left (this is Street 93). Walk on the street. Keep walking and you will start seeing street art in about 200 feet.

The first time we set out to find the street art in the Boeung Kak District, our tuk-tuk driver could not find the street. The second time, we almost missed it again because there are two Street 93s. The best way to get to the street art is to use either the Mosque Address (1 St. 86) or Number 10 Lakeside Guest House on Street 93. 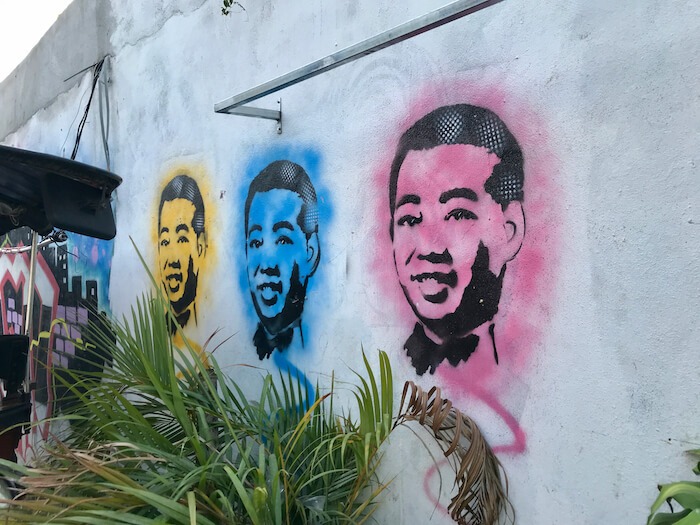 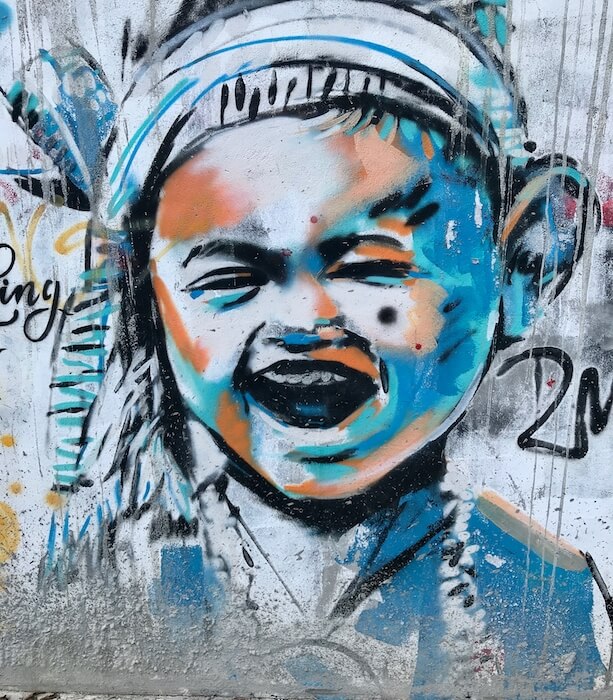 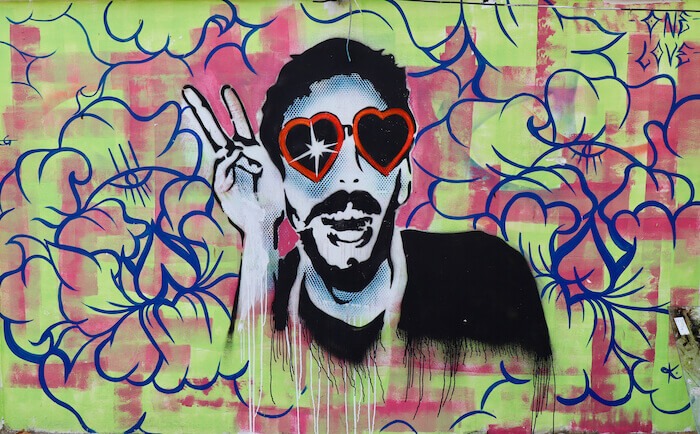 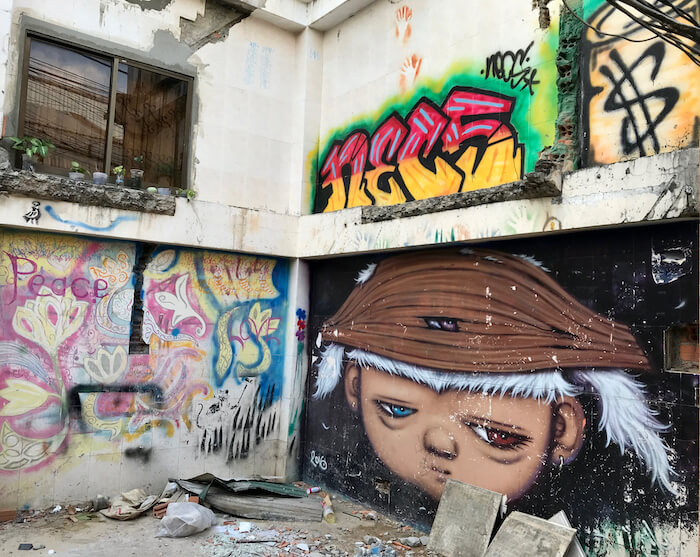 Street 93 Alex Face and others artists 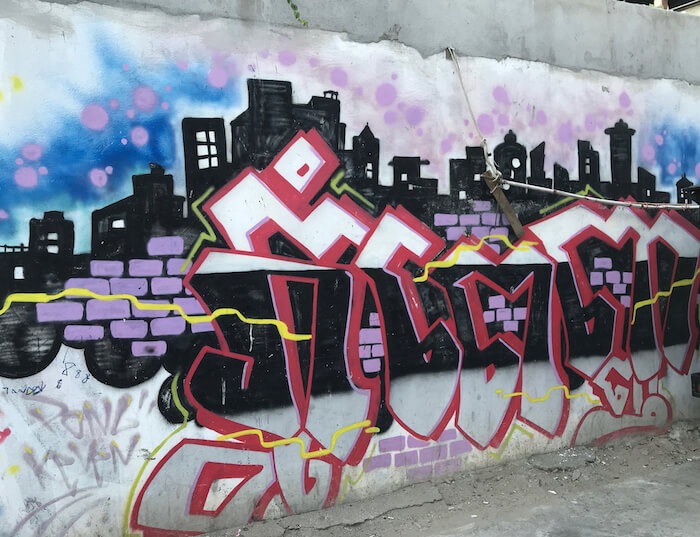 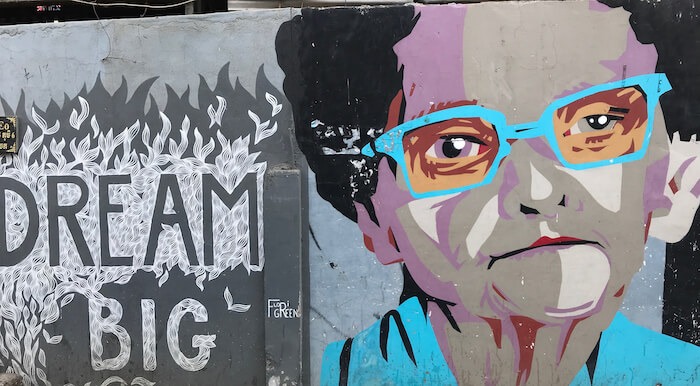 Keep in mind that Preah Monivong Blvd. is also called St. 93. Don’t get confused (we did). Make sure to go near the Mosque instead. Behind the French Embassy

There is another area in the Boeung Kak district (behind the French Embassy, in the vicinity of the Callamet Hospital). This area is a poorer part of the city and you should be very careful about your camera and bags. There is very raw graffiti in this area, mainly on abandoned buildings. Some of the graffiti and murals have been there for a few years so you will see much wear and tear. 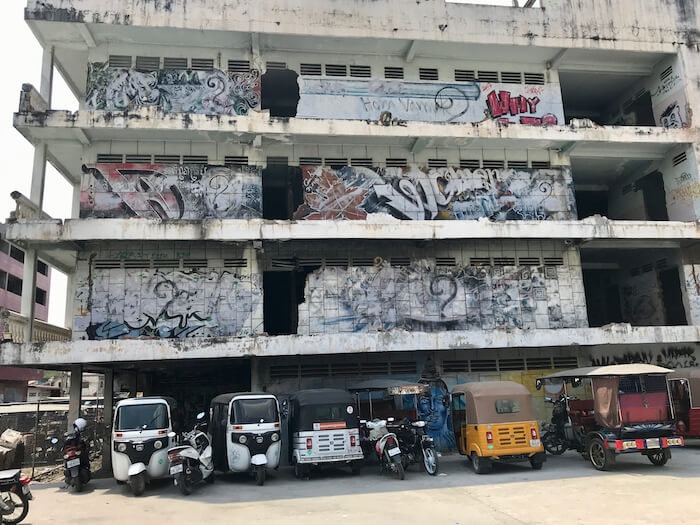 Street Art behind the French Embassy. This whole building outside and inside has street art. 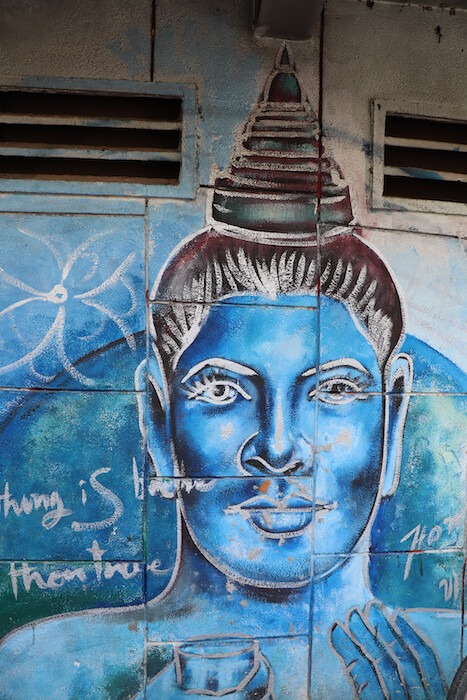 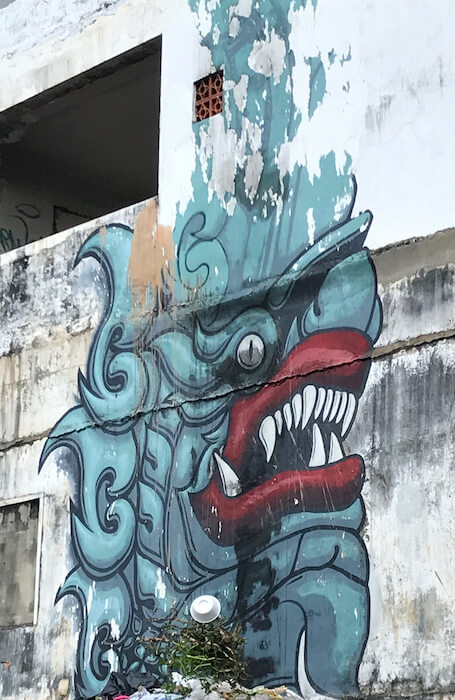 How to Find Street Art behind the French Embassy

To get to the street art in the vicinity of the French Embassy & Callamet Hospital, you can either take a tuk-tuk (with the destination of French Embassy) or walk.
The nearest large landmark is Wat Phnom. From Wat Phnom, walk 3 blocks west along Daun Penh Ave 92, pass the United States Embassy and the Raffles Hotel Le Royal. Turn right onto Preah Monivong Blvd 93. Walk 5 blocks north on Preah Monivong until you reach the Callamet Hospital and then turn left on St 80.
While there are many hospital workers and visitors by the hospital, be careful as the street art starts a few hundred feet beyond the embassy and hospital entrance and there is a lot of construction going on.

We found a few murals near Meta House, a small cultural center that has movies and other events. There are 5 nice pieces on this block. It’s not far from Sui Joh mentioned below. 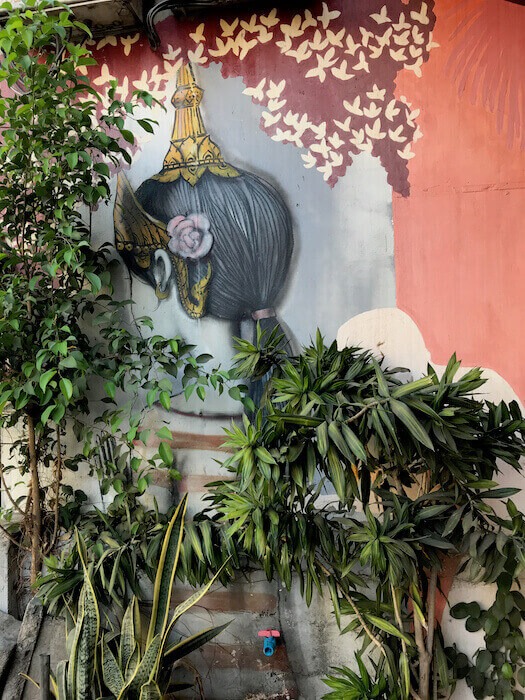 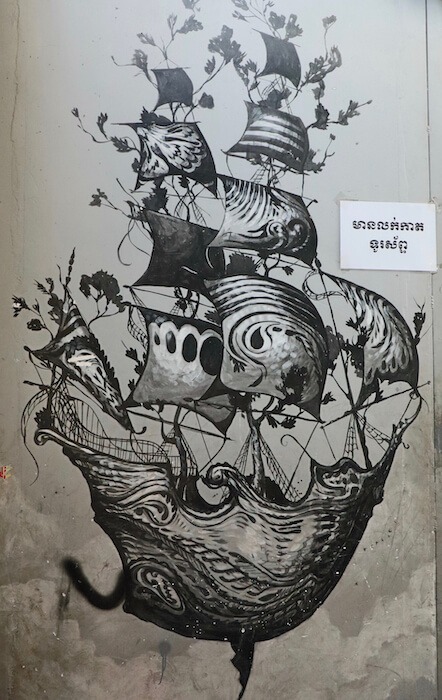 There are a number of places to see street art inside businesses. These are much more permanent than the street art outside.

You can find art by Lisa Mam, Peap Tarr and friends at: 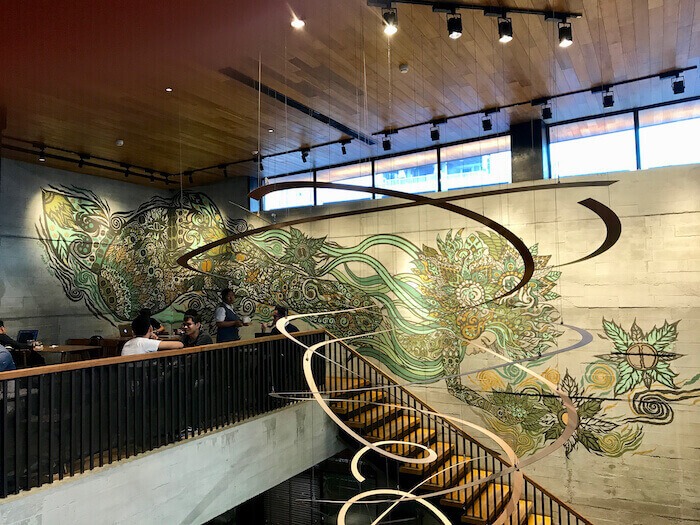 Mad Monkey Hostel has a series of murals that you can see when you walk inside the entranceway. Address: # 26 Street 302 Sangkat

This mural was one of the ones painted for the Cambodia Urban Art Festival. It is on the Herb Cafe at the corner of Street 278. 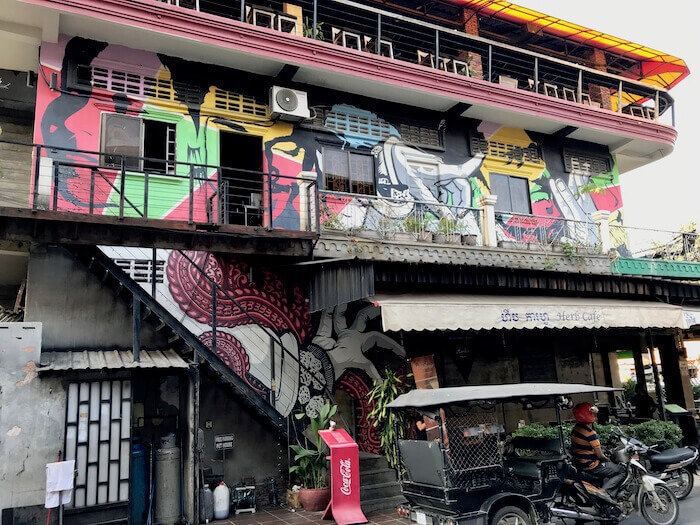 We found this mural in an alley next to our hotel on 108 and Riverside. 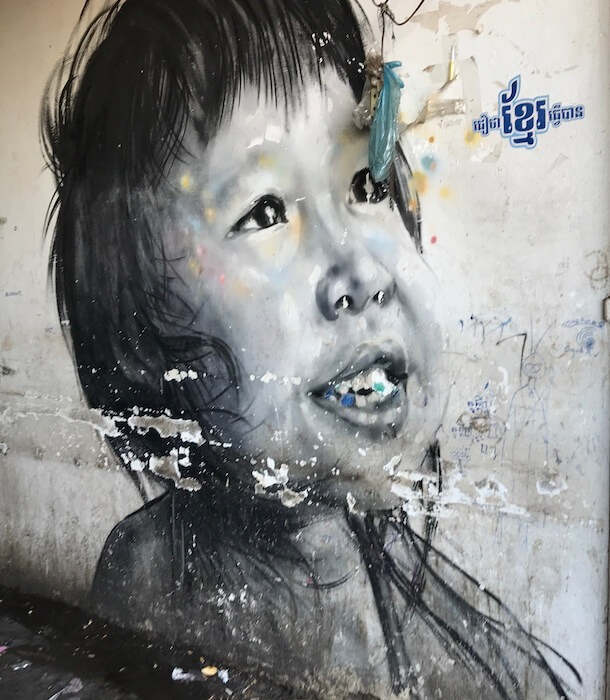 Mural on Street 108 and Riverside

Kbach Gallery is an art gallery that showcases street artists. You will find art by Chifumi, Theo Valliers as well as local artists like Sovivorth Orpoz. The gallery is not always open, so check before you go.

The map below is a route from the from Meta House to Sui-Joh, Mad Monkey and the Starbucks flagship store.

1. When walking about, keep your eyes open for alleys – there’s always the possibility of encountering a mural or graffiti.
2. Check out the Cambodia Urban Art Festival – they often have a map listing the locations of the street art. Do note they may not necessarily be found on the streets. Sometimes they are painted directly onto the buildings where the streets are located
3. When using a tuk-tuk to locate street art, give them the nearest landmark.
4. Streets and districts are confusing in Phnom Penh. For instance, the next street after St 279 is St 294. Google Maps doesn’t always work since the street numbers don’t run consecutively.
5. Don’t get frustrated. Some of the murals that you look for will no longer be there.
6. Be respectful of the Cambodian residents. You are in their neighborhoods.
7. Enjoy the Cambodia style of street art.
8. Be alert and careful in some of the poorer areas.

We’d Love to Hear from You. Where have you Hunted for Street Art? Interested in going to Phnom Penh? 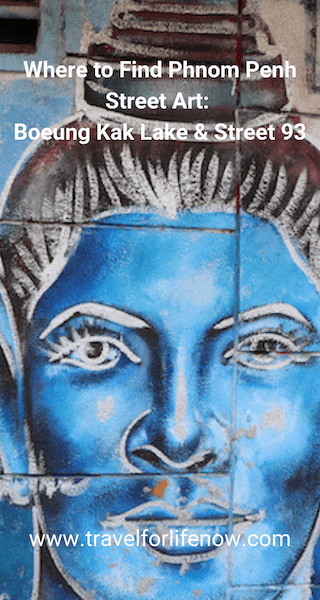 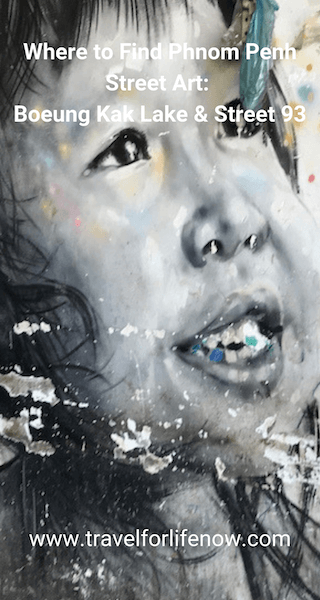 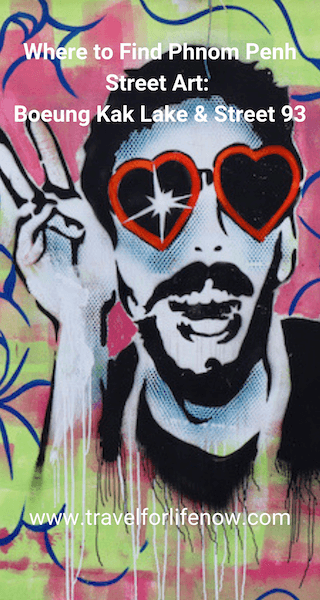 FOLLOW US ON INSTAGRAM
101 shares
We use cookies to ensure that we give you the best experience on our website. If you continue to use this site we will assume that you are happy with it.OkRead more