153 shares
Street art and murals are not the first thing that you think of when going to Hanoi in Vietnam. In fact, Ho Chi Minh City has a much more active street art scene. In Hanoi, however, it is the very first things we saw as we left the airport. We saw elaborate graffiti (tags) and then we caught a glimpse of the 6.5 kilometer (4 mile) long mosaic. Street art turned out to be one of our Hanoi highlights.

The Hanoi Ceramic Mosaics are the longest in the world at 6.5 KM or 4 miles.

We were intrigued and determined to see them up close during our visit.

Hanoi Highlights: The Longest Mosaic in the World

The Hanoi Ceramic Mosaic Mural was conceptualized by Nguyen The Thuy in 2007. They were completed in time for Hanoi’s millennial celebration in 2010. You can’t miss them on the drive from the airport into Hanoi.

If you only see them that way, you’ve missed experiencing the longest mosaic in the world as certified by the Guinness Book of World Records.

The Hanoi mosaics show different periods of Vietnamese history, iconic scenes, tributes from other countries and other designs. Artists in the nearby village of Bat Trang made the tiles. 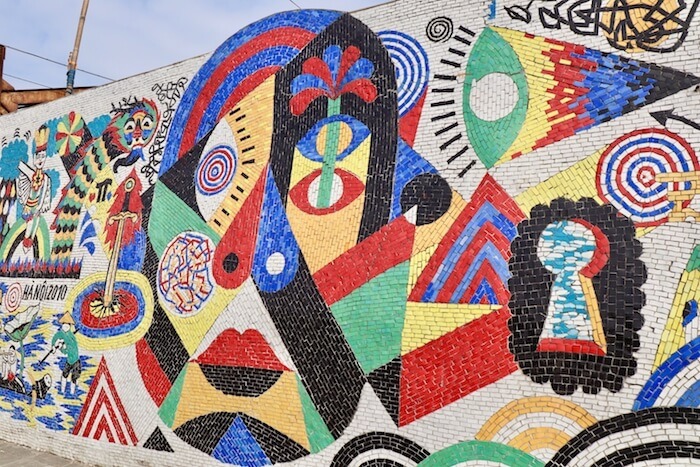 The Hanoi Ceramic Mosaics are along one of the mail highways in Hanoi.

We walked to the mosaics from the Hanoi Opera house—it’s just a few blocks away and viewed them from across the street first. We were on a highway with motorbikes, cars and trucks whizzing by and beeping (you have to get used to the beeping in Hanoi).

It is best to see them from across the highway as well as up close.

The mosaics ran along the famous Long Bien Bridge originally built by Gustav Eiffel, more famous for the Eiffel Town and the Statue of Liberty. The bridge was bombed during the Vietnam War and then restored. 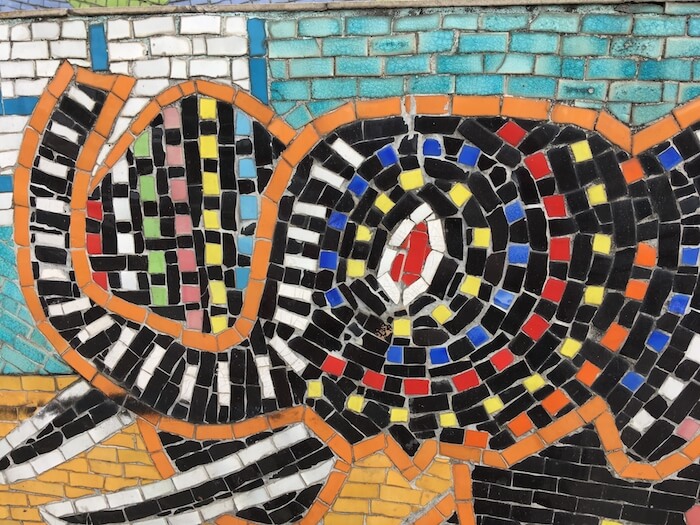 Tips for Going to See the Hanoi Ceramic Mosaic Mural

The mosaics start around the highway near the Hanoi Opera House. From to the opera house, walk east towards the highway along Tran Tien until you arrive at the intersection where a ramp leads up the highway.
Figuring out how to get onto the highway to see them without losing your life is part of the fun.
Behind the Petrolimex Gas Station just 300m from this junction (Tran Khanh Du) is a set of stairs you can take up to the highway. if you can’t find the stairs, look for the car wash behind the petrol pumps.
The mosaics run all the way pass Long Bien Bridge. It’s a little easier to go to the Bridge first and then see the mosaics, but we did the opposite.
This video will give you a sense what it is like to see the mosaics.
We took a detour to check out Long Bien neighborhood market and wander around the streets between Chuong Duong and Long Bien Bridges. If you start at the bridge, you will miss this detour and a chance to see the real Hanoi.

The Murals of Hanoi

The murals of Hanoi, officially called the Vietnam-Korea Joint Project Public Art for Better Space (NGHE THUAT), is a joint Hanoi street art project between Vietnamese and Korean Artists. These murals are painted in the arches under the Hanoi railway. We loved the optical illusions in these murals—many people take pictures interacting with the murals as if they were real scenes. 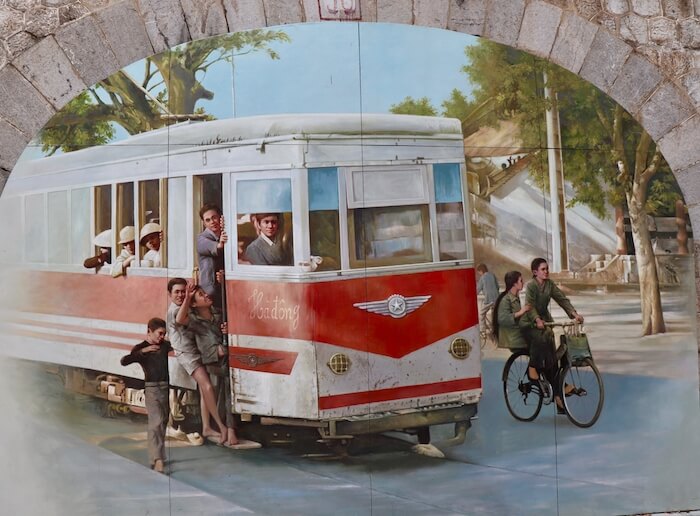 Tips for Going to see The Murals of Hanoi

The murals are located along the north end of Phung Hung street under the railway from the corner of Hang Huong to Han Luroc. We used 27 Phung Hung as the address to locate the murals.
We had just spend the afternoon watching the the 3.30pm train to Sapa that runs through the neighborhood, about a 1km away. If you leave from there, you can walk along the railway tracks until you find a set of stairs leading down to the street of Phung Hung.
A word of caution – for dog lovers and vegetarians–this street is also known as Dog Meat Street. You can see why across the street from the murals.
The murals begin at 16 Phung Hung (at Hang Huong) and go north for about 1km.

Here are the 10 Best Hotels in Hanoi to stay in while you visit the murals. 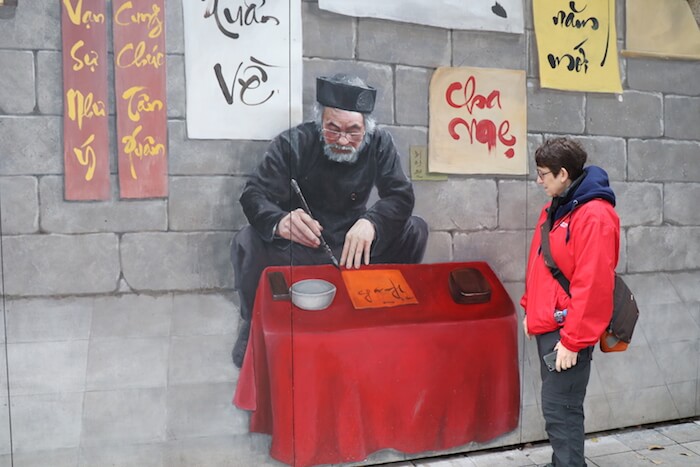 Murals of Hanoi. Sue interacts with the Calligraphy writer

Part of the fun of Hanoi street art is in the discovery. Most of the tags (see below) are on construction sites and easy to see, but the street art murals are harder to find. Keep your eyes out for narrow streets and alleyways—sometimes you’ll find all of the houses covered in murals. 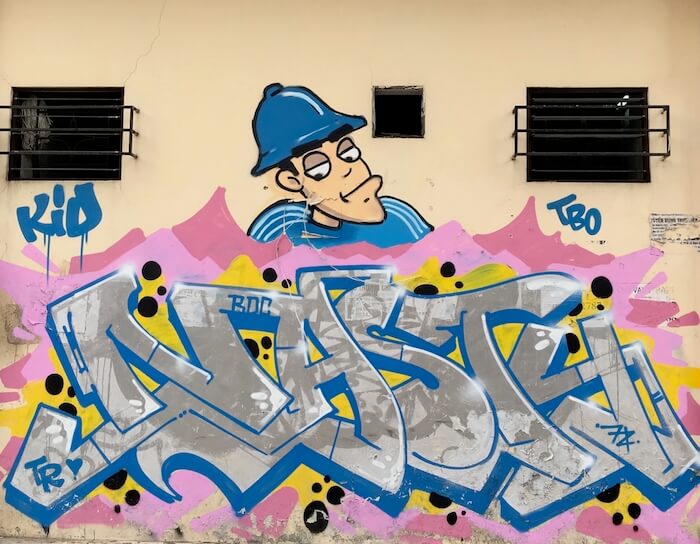 Hanoi Graffiti Tag on a wall. The tags in Hanoi were very elaborate.

We were walking from Lenin Park towards the famous train street corner when we stumbled across this alleyway with murals on the walls of all of the homes. 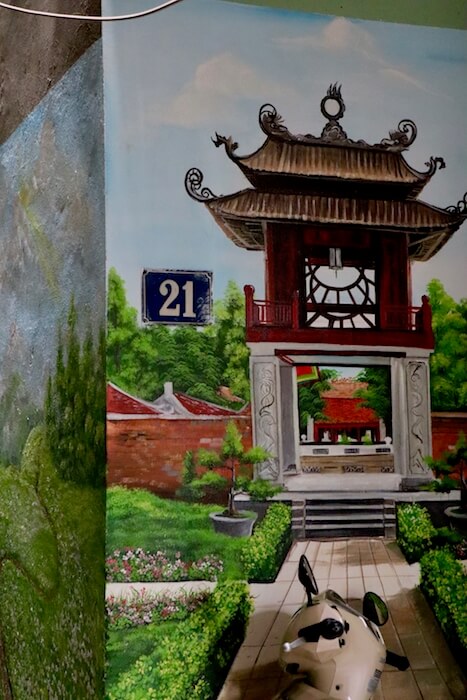 Here are more murals and street art that we found in our travels. 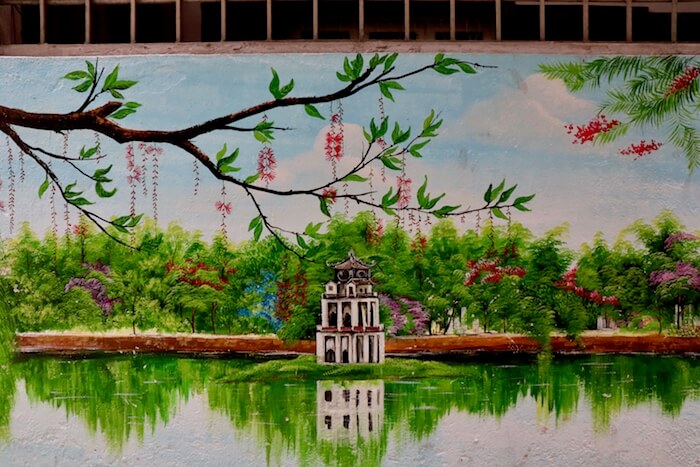 Scenes from Hanoi Street art. Looks like the pagoda in middle of Hoan Kiem Lake 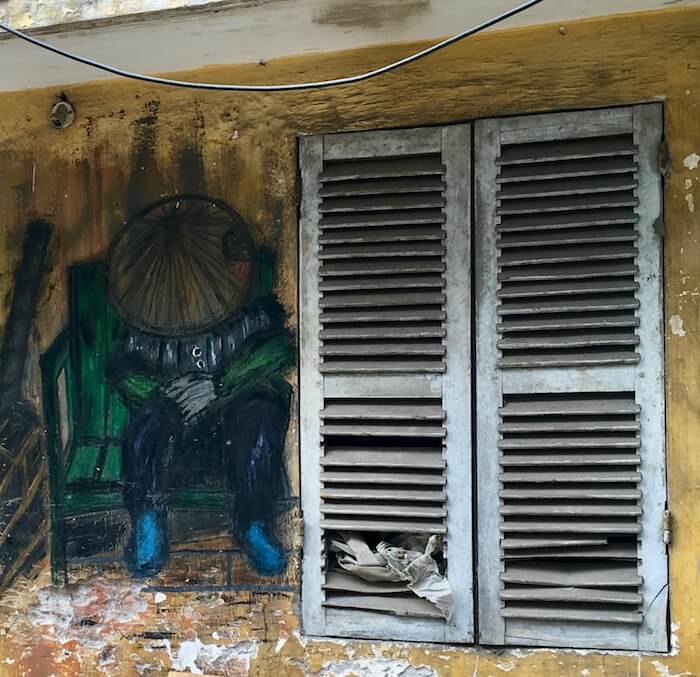 Interested in Street art around the World? Check out:

Where is your favorite Street Art? Please leave a comment. 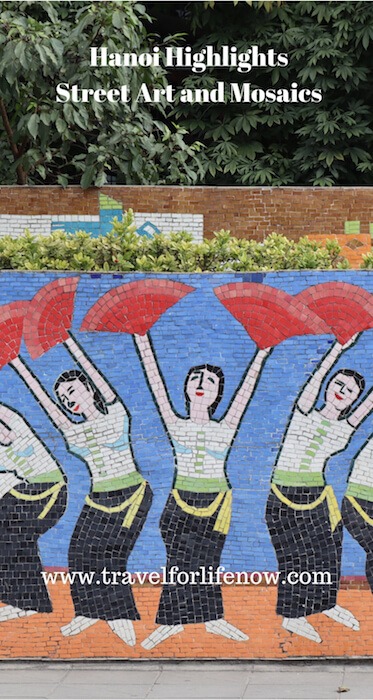 FOLLOW US ON INSTAGRAM
153 shares
We use cookies to ensure that we give you the best experience on our website. If you continue to use this site we will assume that you are happy with it.OkRead more