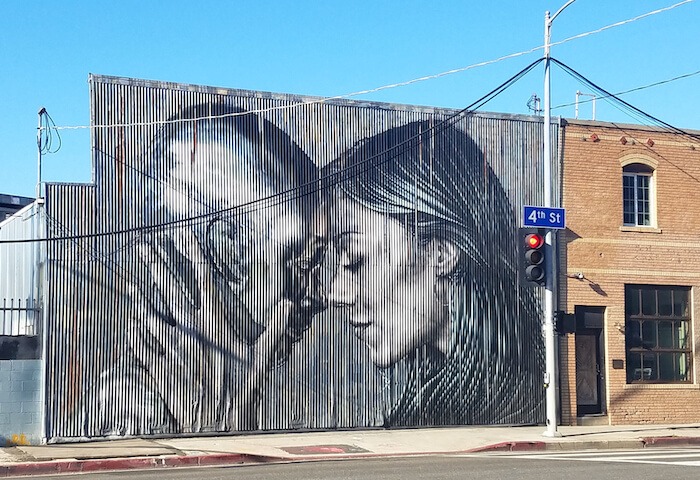 What used to be a vineyard and orange grove, and then an industrial fringe area of Los Angeles is now home to artist studios, lofts, galleries and some of the best street art in Los Angeles.  The Downtown LA Arts District is overflowing with street murals, some sanctioned and some not, making it one of the most interesting and colorful areas of the city to walk around.

At the intersection of Alameda St and Traction Ave sits the Angels City Brewery. The building itself is over 100 years old and is covered in colorful Los Angeles graffiti and murals. This is where we’ll begin our art walk. 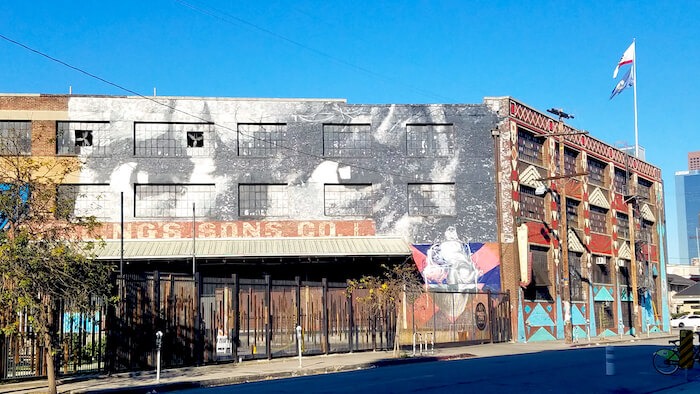 The Wrinkles of the City by JR – photo Cynthia Graner

The Wrinkles of the City

In 2008, the French-born artist JR started a series called The Wrinkles of the City that shows the marks of historical, economic and cultural changes of a city by merging the wrinkles of its citizens with those of its buildings. This is a great example of Los Angeles Wall art.

Los Angeles is the third city to be part of this series with this mural completed in 2011 on the side of Angels City Brewery. There are also representations of the series in Cartagena, Shanghai, Havana, Berlin, and Istanbul.

Sitting above the entrance of the brewery, this mural examines the juxtaposition of age and manufactured youth in a city where perfect, young beauty is valued above all else and plastic surgery is considered an essential part of life. 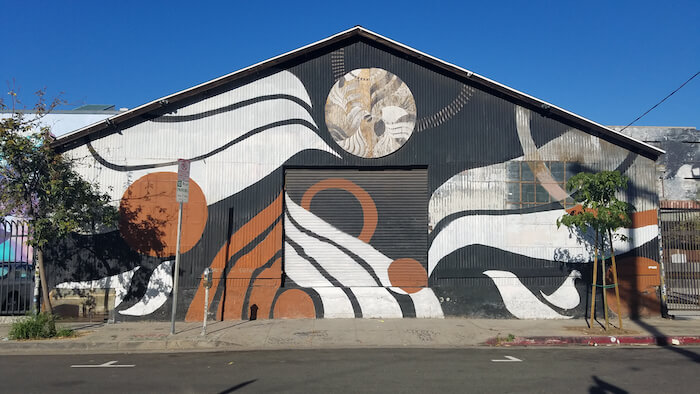 Check Yourself by Lucy McLaughlin – Photo by Cynthia Graner

On another wall of the Angels City Brewery area, is this piece by UK artist, Lucy McLaughlin, aptly named Check Yourself. Originally commissioned on Valentines Day in 2014, it stands to remind us that early detection is essential to winning the fight against breast cancer. 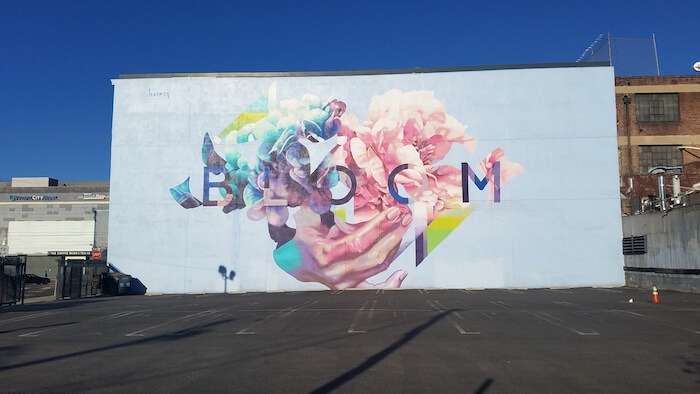 Next door, this colorful bouquet of flowers, held by the artist’s hands, is a spray-painted mural that covers a wall on the east side of the Los Angeles Fire and Police Pensions’ Neptune Building. Artist Hueman (Allison Tinati) created the mural in 2017 in honor of Joel Bloom, a community advocate who was a big influence in developing the DTLA Arts District into what it is today. 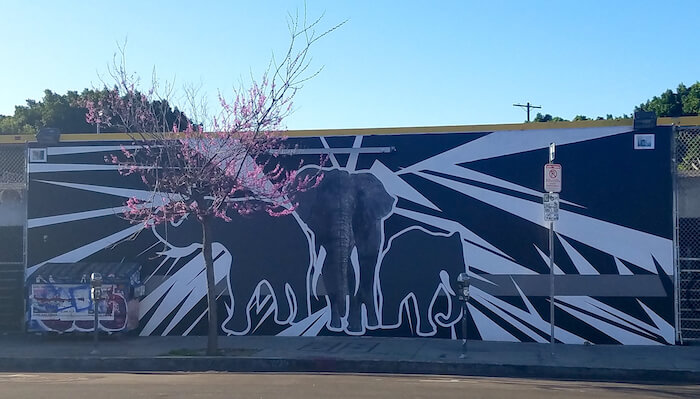 Sitting almost across from BLOOM is an elephant mural by artist Damon Martin. Damon created this piece after learning about the efforts to protect elephants and to encourage people to avoid purchasing ivory.  With backing from the International Fund for Animal Welfare, he painted this mural in 2012 in his signature “razzle dazzle” style inspired by the Art Deco and Jazz Era.

Street art is all over the US, Check out 10 Reasons to See Exciting Jersey City Street Art

Around the corner from the elephant mural is the iconic American Hotel. It stands at the entrance to Hewitt Street, which is lined on both sides with a multitude of street art and murals of all styles. 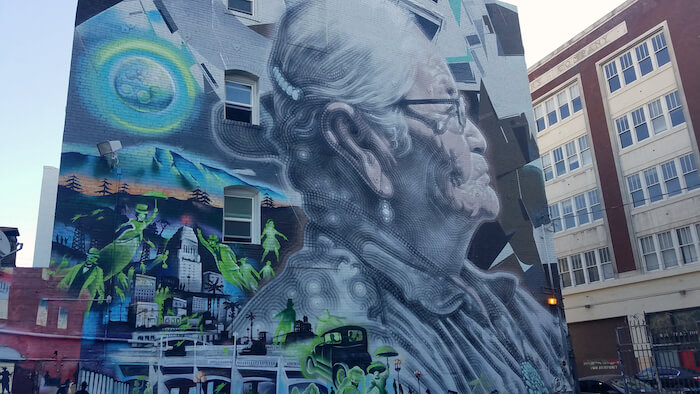 On the back wall of the American Hotel is the large mural, La Abuelita painted by El Mac (Miles MacGregor).  The mural is based on photographs El Mac took of the artist Martha Gorman Schultz, who is a Navajo blanket weaver from northern Arizona.

El Mac, a Los Angeles native, began painting in the mid-1990s and was influenced by the Chicano/Mexican cultures of his neighborhood. He often explores the power and beauty of feminine, elderly, and indigenous people in his works. 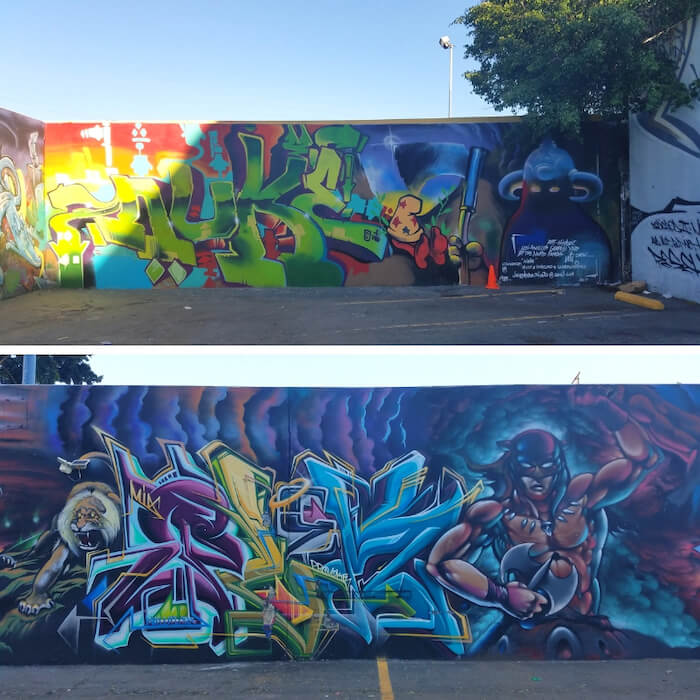 The Yard by Nuke One and UTI – Photo by Cynthia Graner

In the same lot of La Abuelita is The Yard, encircled by walls of graffiti art by Nuke One (Joseph Montalvo) and other members of the UTI Crew. The Yard is considered one of the last graffiti halls of fames in Los Angeles.

Two graffiti writers, SKILL and SNAP formed the UTI Crew in 1986. With over 200 members across US, Europe and Mexico, it acts as a support network for underground writers, artists and creative. UTI will often create one work by multiple artists.

Nuke One (Joseph Montalvo) grew up in Boyle Heights, Los Angeles and uses the landscape of L.A. as his canvas. He also was one of the original artists of Undiscovered America, which we’ll see later on the walking tour. 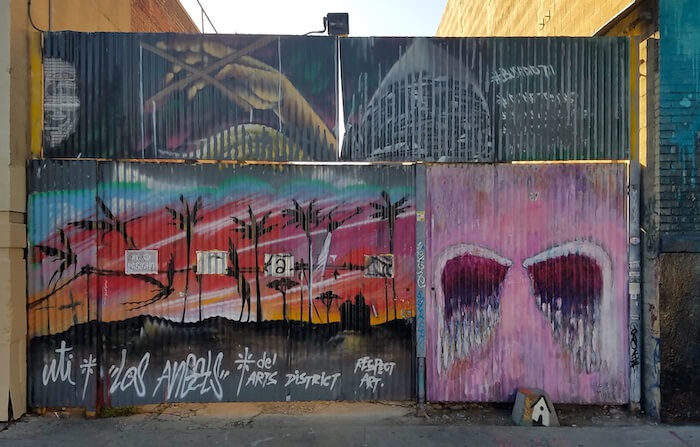 Nestled amongst a series of murals along Hewitt Street sits the very first of a series of wings that now spans around the world.  You have probably seen these colorful wings (or similar ones) in many Instagram photos. Or like me, you may even a photo of yourself standing in front of the wings!

Artist Collette Miller launched the Global Angel Wings Project in Los Angeles in 2012 to “remind humanity that we are all angels of Earth.” This interactive mural was an immediate hit with the public, as people were drawn to stand in front of the wings for their own angel photo. While some murals are specifically commissioned and others are gifted to their communities, all of the murals are free to everyone to use and are not “owned” by anyone. 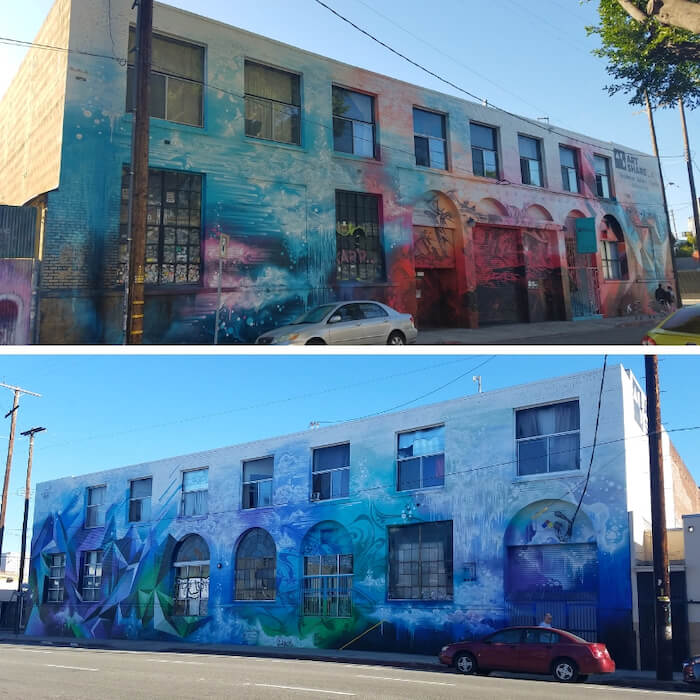 Sitting at the corner of Hewitt Street and E 4th Place is the beautiful Art Share L.A. Building.

Art Share L.A. supports local artists by providing space, resources, and support. In 2017, they commissioned Mikael B to paint the dramatic exterior of their building.  Inspired by the streets of L.A., Mikael B uses a rainbow of colors and shapes to represent the history and stories of the area.

Mikael B (Mikael Brandrup “KETS”) grew up in Denmark and now resides in Los Angeles. He started painting graffiti in his teens under name KETS. In 2008 he started design agency with his brother. Many of his current works combine elements and influences of both his graffiti and design background. 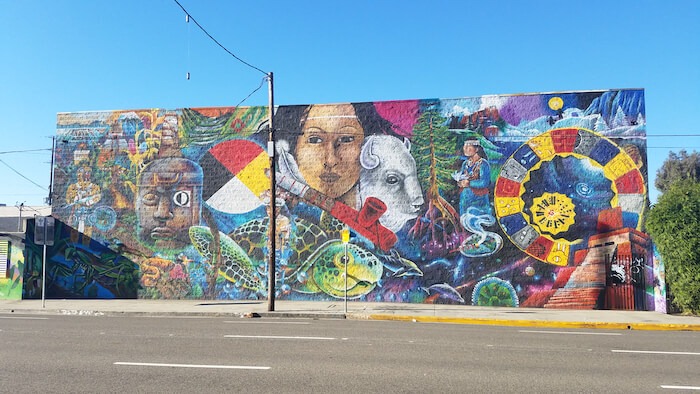 Across the street from Art Share L.A. stands a stunning mural, Undiscovered America by Earth Crew 2000.

Originally painted in 1992, and then restored 2017, this wall stands in honor of the Indigenous cultures and achievements of Native American nations.

Earth Crew 2000 is a collective of graffiti artists organized by Helen Samuels and representing various cultural backgrounds. They use mural painting to promote non-violence while also raising awareness of environmental issues. They have painted murals in Los Angeles, Mexico, Brazil, and Turkey.

Our walking tour ends just a few blocks away, at the intersection of 4th and Merrick Streets, where we happen upon a moment frozen in time between two people. It is an instant of gentleness and intimacy that connects the two with such great emotion that even those of us looking at it are stopped in our tracks.

Painted on a corrugated metal surface, the mural reflects light and gives a feeling of a living, breathing piece of art that is in constant motion as we look upon it.

The mural, completed in 2015 is a collaboration piece between Christina Angelina, a Venice, Los Angeles based artist renowned for her large-scale figurative murals and Fanakapan, a London-based street artist known for creating hyper-realistic visuals of real-life objects.

Ever Changing Murals of Los Angeles

Street art is always in flux and even commissioned murals often change so what you see when you walk down the streets may be different if you take the same walk a year or two later. But if you’re visiting Los Angeles in 2019, these are some of the famous murals in Los Angeles you might see!

Cynthia has worked as a freelancer in Los Angeles for almost her entire career and loves the flexibility and opportunities it offers. Always looking to travel, but not always having a lot of time or money, she started exploring ways to take more trips for Two Days & (mostly) under $200 at a time. Now she can make an adventure out of any size trip! Check out her blog at Two Day Travels.

If you like Street Art, Check out Street Art in Budapest: Best of Budapest 4 day Itinerary

Have You Seen LA Street Art? What Do You Think? Leave a Comment 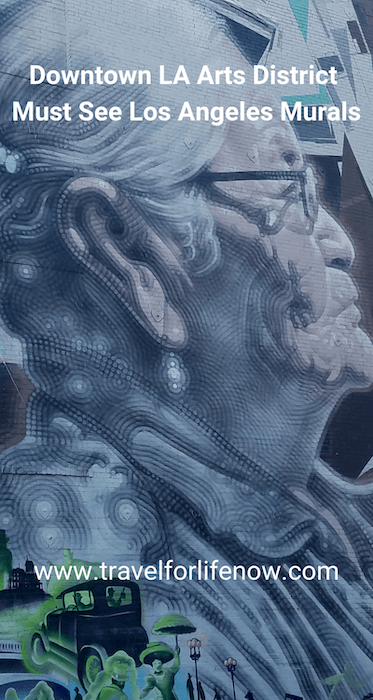 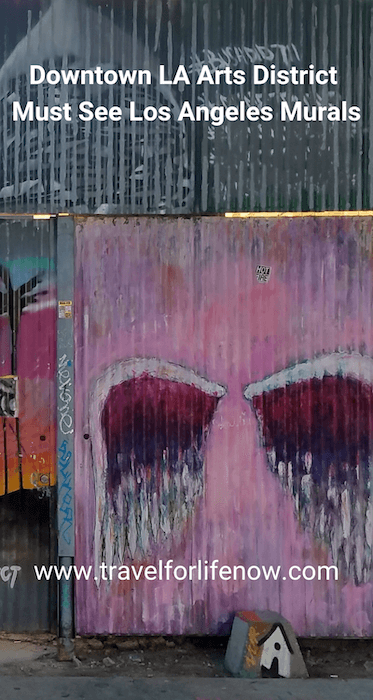