London is well known for its street art scene. Most recently, the London street artist Banksy was all over the news when one of his works sold for $1.4M at a Sotheby’s auction and shredded itself immediately after the gavel sounded. There was a shredder built into the frame. The London street art community was prominent in the development of street art over the past 2 decades. I was in London for only a couple of hours and was determined to see some London street art. I was staying near King’s Cross so Shoreditch Street Art was only a short cab ride away.

I like discovering street art as I wander. Since I had only an hour before I had to take my train from King’s Cross, I decided to go find Banksy’s Designated Graffiti Area mural and wander the nearby streets. Shoreditch street art is all over, so I knew that I would see some interesting pieces. I did this tour at 9 am. At night, this area is full of people. It was very quiet when I was there. 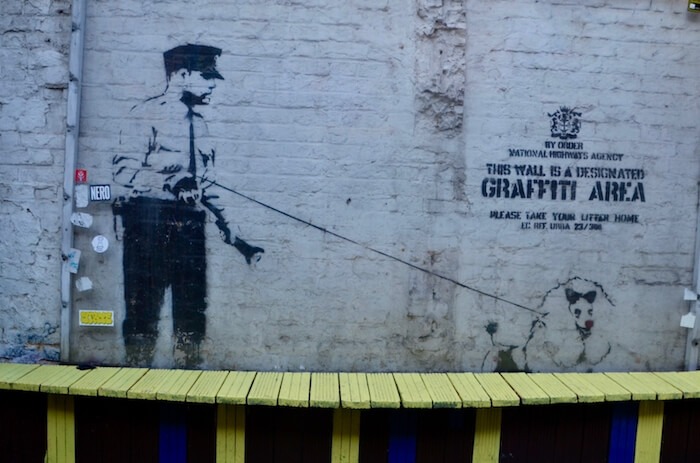 Banksy London Street Artist Banksy’s mural in Shoreditch. Painted a decade ago in the back of the Cargo Bar in Shoreditch London.

The Banksy mural above is in the back of the Cargo Bar (83 Rivington Street, Shoreditch) and is covered by plexiglass. Many of Banksy’s murals in London have been painted over and it is a good opportunity to see one intact. Some people object to having street art protected by plexiglass.

Don’t Shoot by London Street artist Bambi . This was painted after the shooting of Michael Brown in Ferguson, Missouri. The black wall had an inscription by Bambi but is now painted over. This is on Riviongton Street near the Cargo Bar.

Bambi is another London Street artist who prefers to remain anonymous. She became well known after she painted political version of the La La Land poster called Lie Lie Land with President Trump and Prime Minister Theresa May dancing. That mural no longer exists.

The Don’t Shoot mural is located across the street from the Cargo Bar. This mural was painted after Michael Brown, an unarmed African American teenager, was shot by a police officer in Ferguson, Missouri. The shooting sparked weeks of protesting by the community.

Note the “Don’t Do It” take on Nike’s Just do it. The black wall originally had the inscription below but is was painted over by the building owner and replaced with a sign that says “You are being filmed. If you graffiti our building you will be prosecuted.”

There is writing on the wall, but it is very hard to read. The original inscription was:

You abuse your powers again and again. Another innocent unarmed soul is murdered in your name. Filthy blue lies flow and flow. You shot him six times for just jaywalking home. Left in a pool of blood on the street. But you think it’s just another day on the beat. Come on justice must be done or anarchy will bite you on the bum.

I couldn’t take my eyes off this mural.The dissonance of apparent soccer playing school kids with their feet on a skull and hands up is very powerful imagery about the fight against police brutality. Some people think the faces on the boys resemble former President Obama.

The Cargo bar courtyard of full of street art. I loved the work by London street artist DS. This is a mural that goes around one of the outside bars in Cargo. DS sees his mission as to improve walls–inside and outside. He’s locally born and raised in London.

This mural by Nathan Bowen is located near Rivington Street. While Banksy, Bambi and DS use stencils, Bowen uses pens and acrylic paints. His goal is to create art in places that are run down. He calls this “After Lives,” giving an artistic afterlife to streets and buildings.

The mural above is by French artist C215. Christian Guémy uses the signature (C215) derived from his former prison cell. I also saw his work in the French countryside. He tends to paint portraits of individuals, with focus on expressions and eyes. He uses stencil as well as other techniques.

There is street art all over Shoreditch and I would recommend allocating a few hours to wander the streets. The Cargo Bar is located at 83 Rivington Street in Shoreditch. Since I was short on time, I took a cab. It was a 10 minute ride from King’s Cross. You can also get there by the N205 or 214 Bus (about 30 minutes).

Looking for more Street Art? Check out these posts:

Leave a Comment. I’d love to find some new places to see Street Art. Where is your Favorite Street Art? 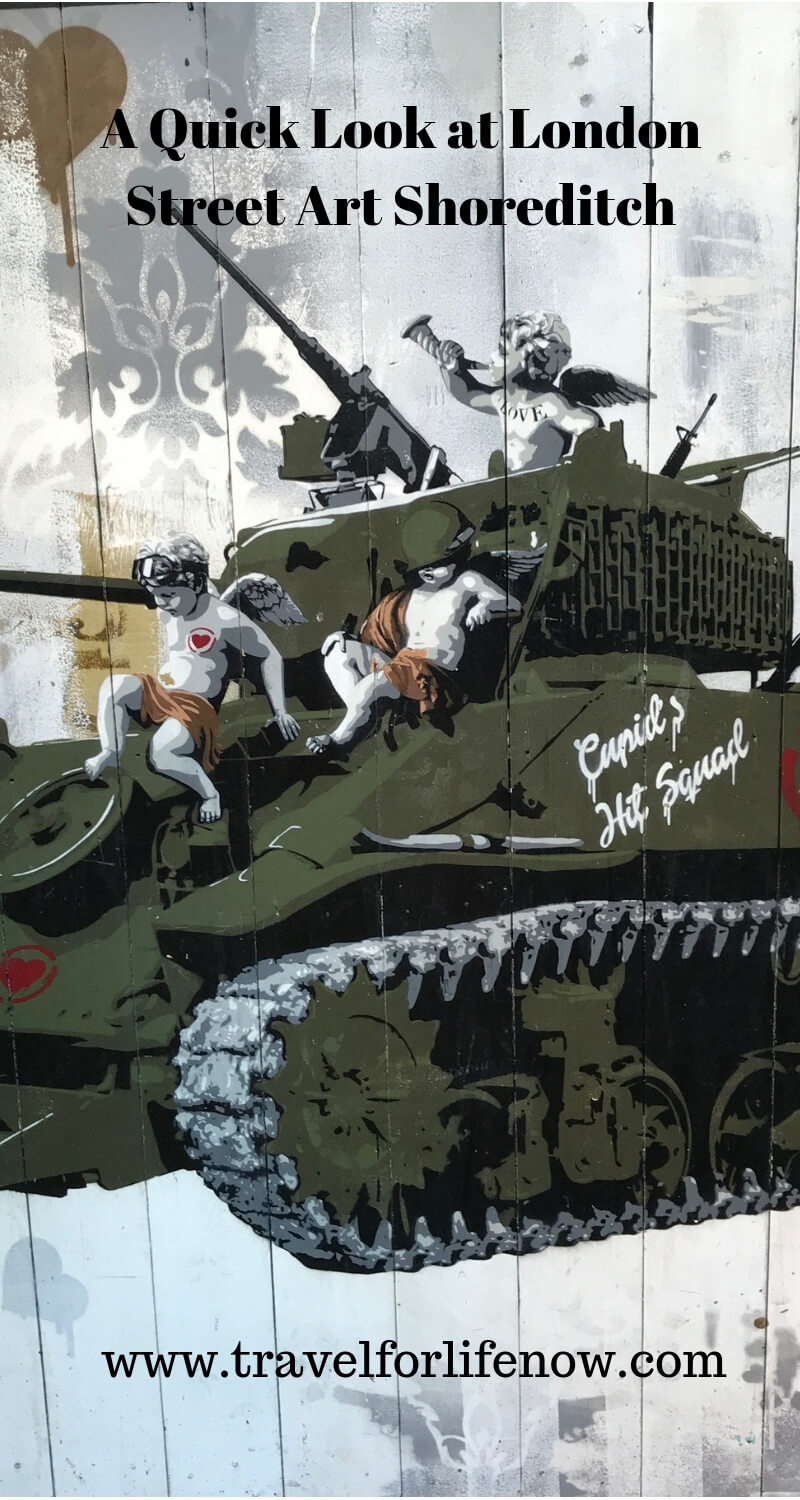 FOLLOW US ON INSTAGRAM
139 shares
We use cookies to ensure that we give you the best experience on our website. If you continue to use this site we will assume that you are happy with it.OkRead more