A New Look at The Jewish Quarter Budapest Synagogues 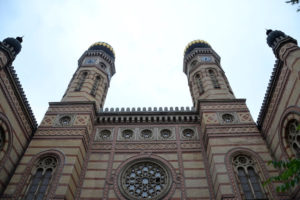 Dohany Synagogue was built with Morrish and Catholic architectural influences. During WWII, the Germans used the Synagogue as a radio tower.

I went to the Dohany Synagogue (one of the Jewish Quarter Budapest Synagogues) on the first evening that I arrived. We were staying a few blocks away in the Jewish Quarter. It was 8 pm and the light was softening. I viewed the Weeping Willow  (officially the Memorial of the Hungarian Jewish Martyrs) through the wrought iron gates. I wasn’t ready to go inside, but I wanted to experience the place and the history.

The Jewish Quarter is currently one of the “hippest” areas in the city and is becoming gentrified. For decades after WWII, it was literally in ruins. Then came the Ruin Bars, including Szimpla Kert, the first one.  Now, there is street art all over the Quarter. And, the Jewish Quarter has many places to eat like Street Food Karavan.

For more on street art and ruin bars, see the map and photos in our Budapest 4 Day Itinerary 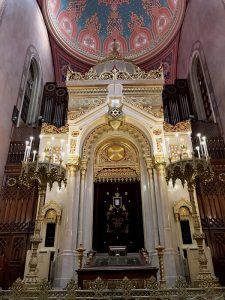 The Jewish Quarter also houses a more somber history. It was the Jewish Ghetto during World War II. It has a number of Holocaust Memorials and the Budapest Synagogues–Dohany (the Great Synagogue), Kazinczy Street and Rumbach. The Hannah Senesh Museum is also located in the Jewish Quarter.

The Dohany Synagogue is the place that most tourists visit. It is the third largest synagogue in the world (the Belz Great Synagogue in Jerusalem and Temple Emanu-el in New York are larger) and the largest in Europe. 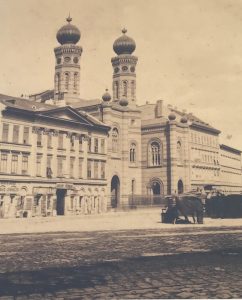 Built in 1859 in the Moorish style, the Dohany Synagogue can hold nearly 3,000 people. The Heroes’ Temple, the graveyard, the Memorial and the Jewish Museum are on site.

The style of the Great Synagogue is unique in that it embraces both Moorish (like the Alhambra in Spain) and Catholic influences. That is, indeed, an unusual combination of Jewish, Catholic and Islamic influences. 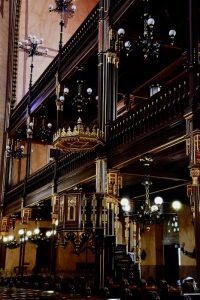 Notice the raised Pulpit on the right side. This is a Catholic element in the Dohany Synagogue.

The Catholic influences have more to do with assimilation. The Hungarian Jews in the mid-1800s wanted their house of worship to be similar to the Hungarian Catholic Churches. So, they added an organ, a pulpit and other elements. They considered themselves to be Neolog Jews, a Hungarian branch of Judaism which kept the Jewish religious traditions while assimilating into Hungarian culture.

The Synagogue also has a cemetery which is very unusual and is in fact contrary to Jewish law. During the Holocaust, Dohany Street was the border of the Jewish Ghetto. Budapest’s Jews were rounded up during the winter of 1944-1945. Of the 200,000 Jews living in Budapest, more than half were sent to concentration camps. 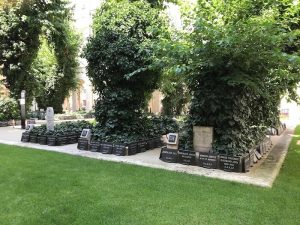 Cemetery in the courtyard of Dohany Synagogue. Memorial to Jews that died in the Jewish Ghetto.

More than 10,000 people died in the ghetto. Some were buried in the Kozma Street Cemetery. Over 2,000 Jews are buried in the Dohany courtyard as there was no other place to bury them. Prague is the only other place in the world with a Jewish Cemetery near a Synagogue (for the same reasons).

During the Holocaust, the Germans used the Synagogue as a radio tower. While most of the area was destroyed, the Dohany was damaged but was spared total destruction by the Germans. During the Russian siege of Budapest, bombs hit the Synagogue but again it survived. It was repaired and restored after the war.

Dohany is an active Synagogue, unlike most in Eastern Europe. Today, it is estimated that the Jewish population of Budapest is around 120,000. 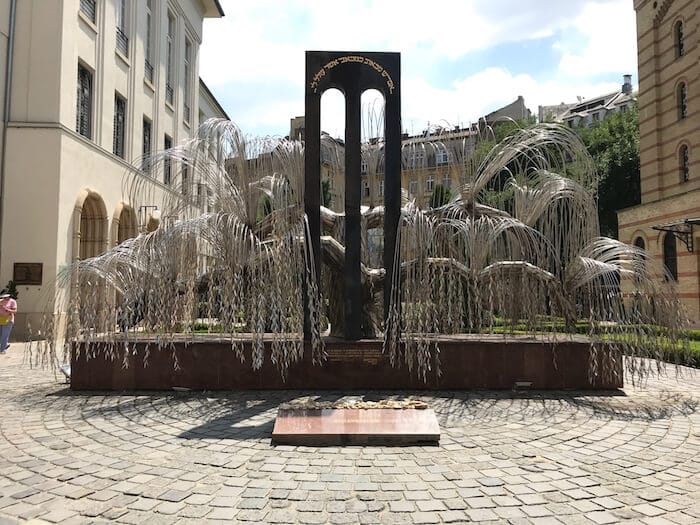 Dohany Synagogue Memorial of the Hungarian Jewish Martyrs has the names of 30,000 people who lost their lives during the Holocaust.

In the courtyard of the Temple, after walking through the cemetery, we came upon the Weeping Willow Tree. The names of Jews who perished in the Holocaust are etched on the leaves. The tree and the story of the Holocaust in Hungary made me weep. 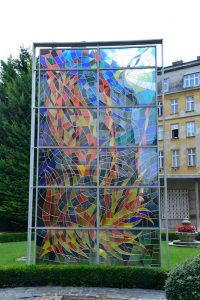 The Raoul Wallenberg Park pays tribute to Wallenberg and others that helped to save the lives of Jews during the Holocaust. In addition to Wallenberg, Swiss diplomat Carl Lutz (saved 60,000+ Jews), Giorgio Perlasca (saved 5,000 Jews), Mons. Angelo Rotta (saved 15,000 Jews), Gennaro Verolino (saved tens of thousands of Jews).our post on the Budapest 4 Day Itinerary

The Heroes’ Temple was built in 1931 as a memorial to Hungarian Jews that died during World War I. It is still used for services but is closed to visitors.

Holocaust Memorials in and Outside of the Jewish Quarter

Our post on the Budapest 4 Day Itinerary, covered the Carl Lutz Memorial, Memorial Wall, the Hannah Senesh Museum (near the Great Synagogue) and the Shoes on the Danube  (not in the Jewish Quarter).

The Holocaust in Current Hungarian Discourse 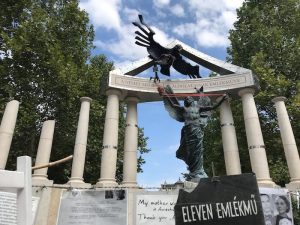 Eagle & Angel Monument with memorial to the Holocaust in foreground

The Eagle and the Angel Statue is a controversial memorial in Budapest, depicting Hungary as an Angel being attacked by Germany (the eagle). It is dated 1944 and has the inscription: “In memory of the victims.” Jewish and progressive groups have protested it as a re-write of history. There is a protest memorial on the sidewalk in front of the statue of photos of Hungarian Jews that died in the Holocaust, suitcases, shoes, and other belongings. 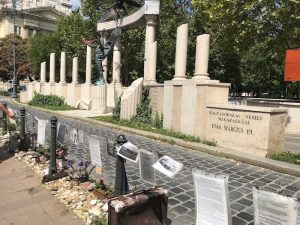 Protest materials in front of the Eagle & Angel Monument.

The Monument was unveiled in 2014 the middle of the night right after the re-election of Hungary’s right wing and anti-immigrant Prime Minister Viktor Orban. Hungary has a long history of anti-semitism and conservative politics and this Monument is an attempt to change the story about Hungary and the Holocaust..

Conversations with Hungarians about the Holocaust

The controversy about the Eagle and the Angel also played out in my experience of speaking with Hungarians about the Holocaust. On my first day in Hungary, I took a free walking tour and the tour guide gave a 2,000 year history of Hungary without mentioning the Holocaust or Jews. After I questioned her, she said that Germany invaded Hungary and that the Germans killed Hungarian citizens. That is the exact message of the Eagle and Angel Monument. 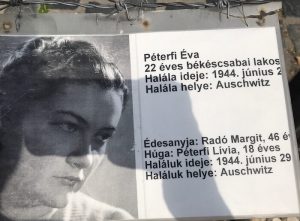 In fact, Hungary was an axis power until 1944 when it tried to leave the Axis and join the allies. At that point, Hitler invaded Hungary and began the deportation of Jews from the countryside to Auschwitz. In just 2 months, 600,000 Jews were deported to concentration camps. That could only happen with extensive collaboration between the Hungarian government and people and the Germans. The Hungarian Arrow Cross was viciously anti-Semitic and murdered tens of thousands of Jews on the streets of Budapest. This happened while the Russian army surrounded the City and prevented the trains from transporting Jews to Auschwitz.

Budapest touched me deeply. I knew that Hungary was part of the Axis powers during World War II, but knowing and seeing/experiencing are two different things. As I stood over the Shoes on the Danube and looked at the river, I shuddered as I thought of the people that stood in that place. The  Holocaust in Hungary was brutal. The courage of Raoul Wallenberg, Hana Senesh, and Carl Lutz touched my heart. The re-written history that I sometimes heard from people in Budapest left me angry. And, the current right wing, anti-immigration government in Hungary made me deeply concerned about the future of Hungary and Europe.

For more posts about Jewish topics, you might also be interested in the Lower East Side Jewish Food and Street Art Tour.

I ‘d love to hear your thoughts and responses. Have you been to Budapest? Or Eastern Europe? Or one of the Concentration Camps? 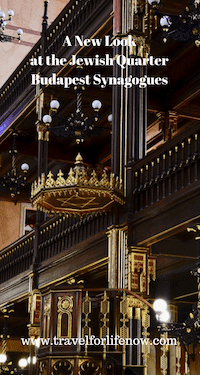 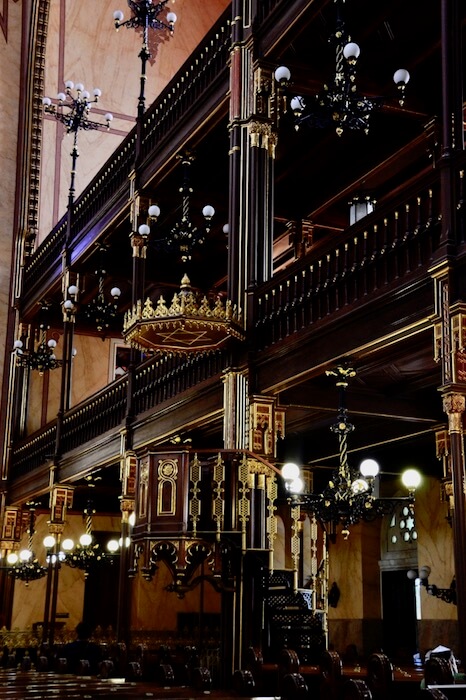 FOLLOW US ON INSTAGRAM
132 shares
We use cookies to ensure that we give you the best experience on our website. If you continue to use this site we will assume that you are happy with it.OkRead more