Thinking about a visit to Washington DC? Worried about the hordes of tourists in the city during the summer? Try Off Peak Season Washington DC. The week between Christmas and New Year’s was surprisingly slow. You’ll find that you can get into many museums, tours, attractions and restaurants much easier than during the high seasons of the summer, spring and fall. Hotels are less expensive as well.

On our trip to DC at the end of December, the weather was mild (highs of upper 40s and lows in the 30s). With Congress out of session, the city was calm and the crowds were much lighter.

Washington is a great city for people who like to walk. In about 3-4 hours, we (2 adults) saw all of the monuments and memorials on the mall and the tidal basin from the Washington Monument to the World War II Memorial to the Lincoln Memorial to the Vietnam Veterans, FDR and Martin Luther King memorials. The Vietnam Memorial brought tears to my eyes as I walked past the nearly 60,000 names of the young men who died in the war. There are three parts to this Memorial and you can easily miss the tribute to women who served. The Korean War Veterans Memorial is very haunting. The Lincoln Memorial was impressive—I read the Gettysburg address chiseled into the War and thought about the Civil War and the fight to end slavery. Lincoln’s second inaugural address is also worth reading, though the language is hard to follow.

A short walk to the Tidal Basin brought us to the memorial to Dr. Martin Luther King. He stands tall, looking sternly across the water at Thomas Jefferson, a fitting statement to Jefferson for the “great compromise” of slavery during the founding of the country. Here’s one of the many inspirational MLK quotes on the walls:

I have the audacity to believe that peoples everywhere can have three meals a day for their bodies, education and culture for their minds, and dignity, equality, and freedom for their spirits.
Dr. Martin Luther King, Nobel Peace Prize acceptance speech, Oslo, Norway, 1964

A short walk around the water and we came upon Franklin Delano Roosevelt, Eleanor Roosevelt, the Depression, the New Deal and the beginning of World War II. The FDR monument tells the story of his entire presidency from the new deal to the war. Eleanor Roosevelt is the only individual woman recognized on the mall or the tidal basin.

We booked a tour of the Capitol. You must book these tours through your congressman or senator at least 3 weeks in advance. During off peak season Washington DC, there are times available for walk ins if you don’t mind waiting a while. The tour took us through the rotunda, as well as several historical areas. From the Capital, you can walk through an underground tunnel to the Library of Congress. This building is rivals the capital in design and beauty. We saw the Guttenberg Bible and many historical books and documents. Rosa Park’s personal papers are on display now. 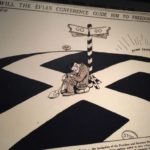 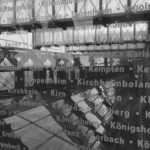 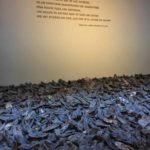 On previous trips, I had never been able to get into the Holocaust Museum. It was always already over-booked. Off Peak Season Washington DC makes it much easier to get into the museums. I have been to Auschwitz, Jewish Ghettos in Europe, the Jewish Museum in Denmark, Anne Frank’s House and many other places. This is the largest and most comprehensive museum focused on the Holocaust that I have ever visited. The collection begins with the rise of Hitler and goes through to the Nuremburg trials. Visitor entering the permanent collection are handed an identity cards from a person who lived in Europe during the holocaust.

The museum has an extensive collection of historical videos. I watch Hitler’s speeches and Nazi rallies, portions of the Nuremburg trials including Hermann Goring as well as videos of Adolph Eichmann testifying at his trial in Israel in 1962. There was coverage of the demonstrations calling for a boycott of the Berlin Olympics as well as footage of the liberation of the camps. Most of it is deeply disturbing and difficult to watch.  There were also exhibits of the Warsaw Ghetto and other uprising in the ghettos and camps as well as Christians and Jews who helped the resistance and hid Jews from the Nazis. The US and its allies failure to allow Jews into the US and other safe havens is also well documented. The historical information about the decision not to bomb the crematoriums at or the railways into Auschwitz is also detailed.

The Holocaust Museum is an important museum about a deeply upsetting history. I did not expect to spend as much time as I did—as much as I wanted to leave, I couldn’t tear myself away. 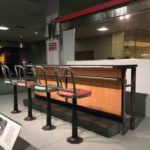 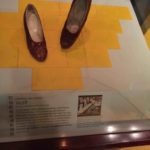 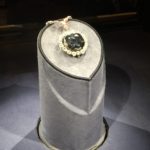 During our trip, we went to the Smithsonian Museum of Natural History where we saw the Hope Diamond and a fantastic National Geographic photo exhibition. After that, we went to the National Museum of American History where we saw Julia Child’s Kitchen, Mohammed Ali’s boxing gloves, Dorothy’s Red Slippers from the Wizard of Oz and the lunch counter from the Woolworth’s sit ins in Greensboro, North Carolina during the Civil Rights struggle.

We took the Amtrak from Newark. Roundtrip fare for 2 was $268.
Your elected official can arrange for tours of the White House, Capitol, Supreme Court. During high season, you must make these requests several months in advance. We made our request 3 weeks in advance. It was too late to get into a White House tour, but the Capital tour and some of the other tours were still available.

All the museums we visited had short waits to enter (15 minutes or less). There is also very strict security.

We stayed at the St Gregory Hotel in Dupont Circle. It’s a comfortable, reasonably priced hotel (a one bedroom was $100 plus taxes of $14 per night). We had a full kitchen in our room. The staff was friendly and responsive. The walls are thin and you can easily hear your neighbors. You can take the Metro 4 stops to Dupont Circle or Farragut North.

District TACO – a chain throughout DC that is very good and reasonable (Taco specials like 3 Fish on Tuesdays, Thursdays and Fridays for $8.50), the shrimp is excellent and they have a salsa buffet bar with unlimited helpings. Chips are sold in small or large paper bags while the guacamole is a not as dense as I would like.

Boqueria – another chain that is nation wide. Mainly a tapas bar with seating around main bar and other little cocktail tables. Boqueria was busy when we stopped in for a snack, it would appear most people were there for a drink. They have a happy hour special

Malbec – an Argentinian restaurant located near Dupont circle that specializes in its name sake wine, Malbecs from Argentina. We had the skirt steak special which came with fries and Vidalia onions (usually sides have to be ordered separately). My partner’s NY strip steak was just the right size at 6 oz portion and very nicely done although my skirt steak could have used a little more seasoning. The Ernesto Catena Padrillos Malbec 2014 we had was medium bodied unlike the usual heavy Malbec grapes. It went very well with our steaks.

Lalibela Ethiopian Restaurant – we had the mixed vegetable and meats platter for two. It was reasonably priced at $28. While the injera was good, the meats were tough and some of the vegetables bland. I’ve had better Ethiopian food.

Farmers and Distillers – this was at their newly opened location at 600 Massachusetts at the edge of Chinatown. We went for the $30.00 all you can eat brunch which included drip coffee and an assortment of teas. The selection was wide and included the usual pancakes (some with blueberries), scrambled eggs (some with ham), roast beef (fantastic), salmon, turkey from the carving table, bok choy, sticky ribs (most people love but we found a little too sweet), many vegetables, salads, and an impressive array of donuts, cakes, mousse, tiramisu and bread pudding. The chocolate mousse and the roast beef were our highlights for us. There is a coffee bar where such beverages are charged extra. Brunch was very busy on New Year’s eve and the service could have been a little more attentive but the manager, Kendra handled the issues and graciously took care of us.

Corner Bakery Restaurant – also a chain serves up a good breakfast. We had the Anaheim scrambler and the cinnamon roll French toast that came with a side of bacon. Instead of breakfast potatoes which they ran out of that morning, we were given a bowl of fruit in substitution.

FOLLOW US ON INSTAGRAM
1 shares
We use cookies to ensure that we give you the best experience on our website. If you continue to use this site we will assume that you are happy with it.OkRead more