Berlin Hop on Hop Off Bus-Berlin in 36 Hours 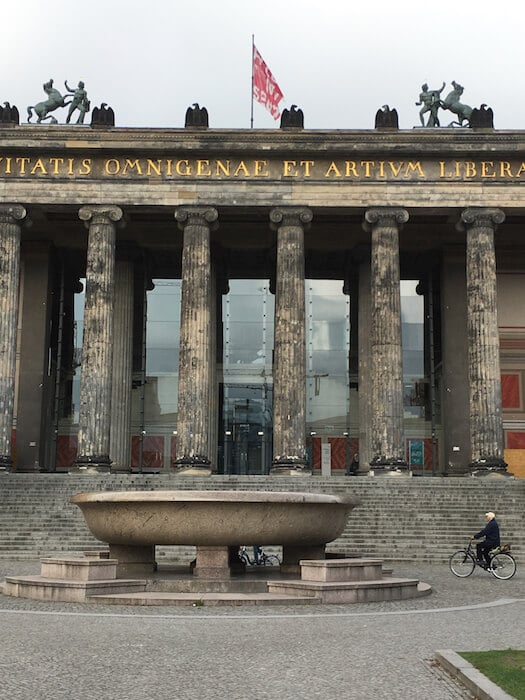 Berlin Hop On Hop Off Lustgarten Park on Museum Island

I have wanted to see Berlin for a long time. I finally had the opportunity to take a detour to Berlin when I was in Frankfurt for work. Since I was only in the city for 36 hours, I took the Berlin Hop On Hop Off bus to see as much of the city as possible.

Getting Your Ticket for the Berlin Hop On Hop Off Bus

Several tour bus companies offer city tours covering both East and West Berlin for between €20-30 (approximately $23-35USD). While walking along the main shopping street of Kurfurstendamm, the equivalent of New York’s 5th avenue, you can find many tour buses lined along the boulevard offering deals. I got a ticket for the Traditional tour on the CitySightseeing Berlin for just €10 ($12USD) which was a steal.

The bus takes you along embassy row and you’ll see interesting architecture like the 124.5 degree sculpture and the Christian Democrats Union (CDU) building, affectionately called the MS Merkel. The tour made stops at the major sites like Potsdamer Platz, Checkpoint Charlie, Gendarmenmarkt and Alexander Platz (with a 15 minute break at the last stop). 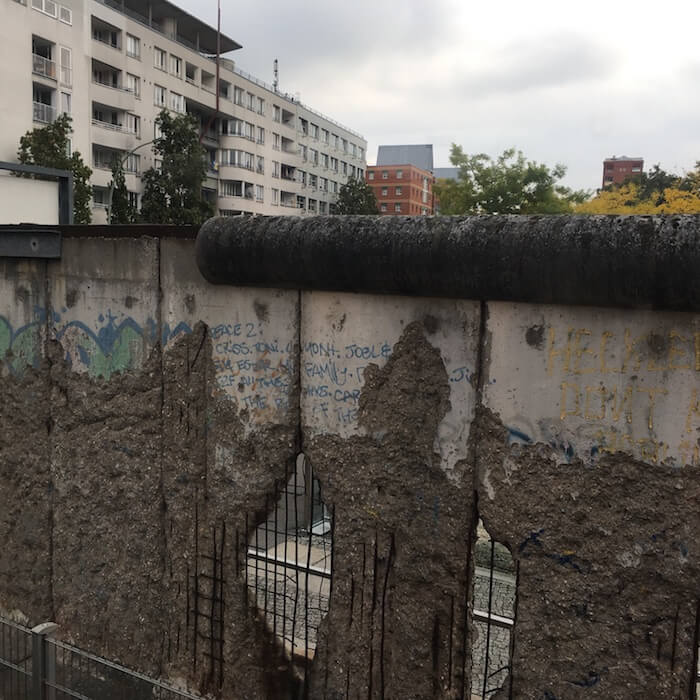 Remains of the Berlin Wall. Built in 1961, the wall divided East and West Germany. It came down in 1990 when many of the communist governments in Eastern Europe fell.

Many people got off at the Martin-Gropius-Bau stop to visit the Topographie des Terrors and to see the remains of the Berlin Wall. The next stop was Checkpoint Charlie. Then we were off to Gendarmenmarkt square to see the Konzerthaus and French and German churches. You can take a segway tour at the square. Next stop was at Alexanderplatz where the bus stops for a 15 minute break. I thought the Granite Bowl at the Lustgarden stop was beautiful. This is also the stop for the Altes and Pergamom Museums which are on a museum island. I got off the bus at the Brandenburger Gate. If you time it right, you can take the Third Reich walking tour. Sadly, I missed the tour by only a few minutes.

If you have tickets for the East Berlin tour, Hauptbahnhof at Washingtonplatz is where you switch buses.

My recommendation is to take the entire ride once to get a sense of the city of Berlin and its sights. It also helps you to decide where you want to get off. I did just that and it took about 90 minutes to do the whole route. Then I got off at Brandenburg gate and visited the Memorial to the Murdered Jews of Europe. Across from the memorial is the Holocaust Museum. 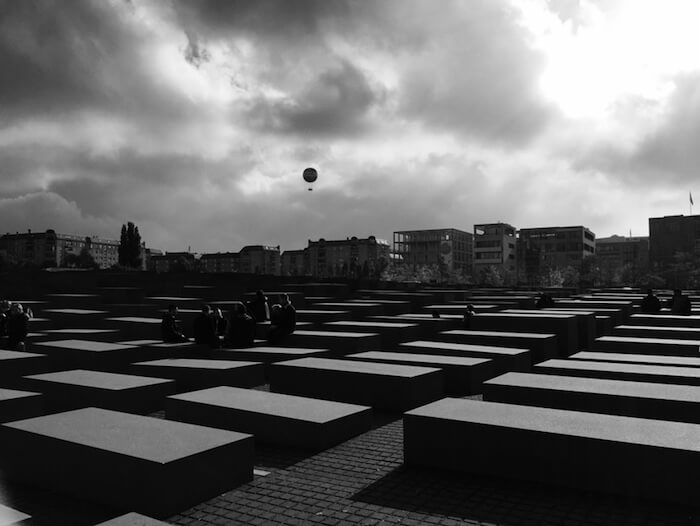 Memorial to the Murdered Jews in Europe. The Place of Information has a list of 3M Jews who were murdered during the Holocaust.

You can get off the next stop to visit the Reichstag Building. While admission is free, you do need to register online in advance to visit the dome:

If you don’t register in advance, you’ll have wait on line 2 hours or more at the Visitor center near the Reischstag building.

The U and S-bahn are very easy to navigate. The Berlin U or Ubahn was opened in 1902, covers a distance of over 15 km and serves 173 stations. The Berlin U is very efficient and trains run every 2 – 4 minutes. Ubahn stations are well located, with good signs and are extremely clean. Fares are based on the number of zones that you travel. An unlimited trips ticket for one day is €7. Single trips cost €2.80 or reduced ticket for 3 stops at €1.70.

The Story of Berlin Museum

The Story of Berlin is a multimedia museum that takes you on a 800 year journey through the city from the middle ages to the Fall of Berlin wall. There is a guided bunker tour of a nuclear bomb shelter from the Cold War. The entrance fee is €12. Berlin Welcome Card (€20 for 48 hours which includes public transport) enables you to get discounts at the Story of Berlin and elsewhere.

The last stop on the Berlin Hop On Hop Off bus is the The Kaiser Wilhelm Memorial Church. In the fall, the Berlin Orchestra will be performing Vivaldi’s Four Seasons at the Church. While I was visiting, I caught the chorale practicing Bach Cantata  Nr. 115 for the evening music service. Given the acoustics of the church, it was an absolutely beatific experience. 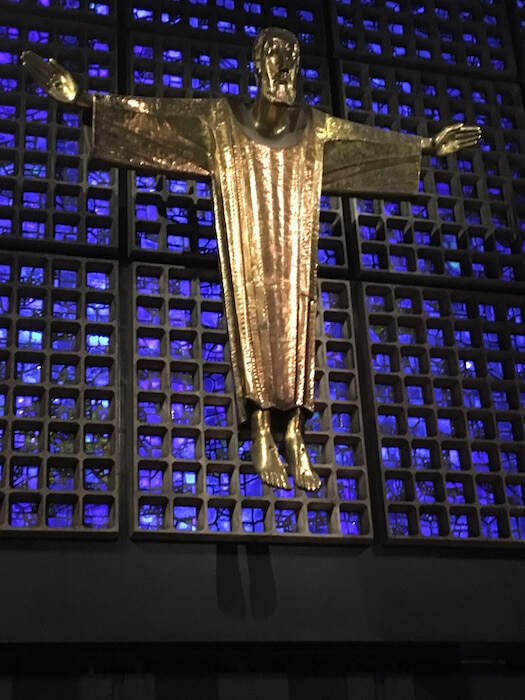 Originally built in the 1890s, the church was destroyed by a bombing in 1943. Today, it stands partially in ruins. The damaged spire has been preserved while the ground floor was turned into a memorial hall with a belfry.

Getting There and Hotel

Berlin is only an hour’s flight from Frankfurt or a 4 and 1/2 hour train ride from Frankfurt central station to Berlin Ostbahnhof.  After landing at Tegel airport, I took a taxi to Hotel Panorama in West Berlin where I had booked a single room for 2 nights at €50/night. When I got to the hotel, due to an existing arrangement with a tour company, the hotel had oversold their rooms. A bus load of tourists from other parts of Germany crowded the tiny lobby. The local tourists were taken care of and I was moved to another hotel courtesy of Hotel Panorama.

Hotel Orion around the corner turned out to be a better deal. A modern hotel located on a quiet residential street of Dahlmansstrasse, Charlottenburg district. For the same price of €50 a night, I was given a double room, including continental breakfast. I was offered a welcome drink due to the mix-up. Hotel Orion was a 5 min (400m) walk to the Adenauerplatz Ubahn station or the S-bahn at Berlin-Charlottenburg.

At the end of my trip, I took the airport bus 109 from across the street (for €2.70). The ride to the airport was 16 minutes. My adventure on the Berlin Hop On Hop Off was over.

For a look at the Holocaust Museum in Washington, DC, see this post.

FOLLOW US ON INSTAGRAM
52 shares
We use cookies to ensure that we give you the best experience on our website. If you continue to use this site we will assume that you are happy with it.OkRead more