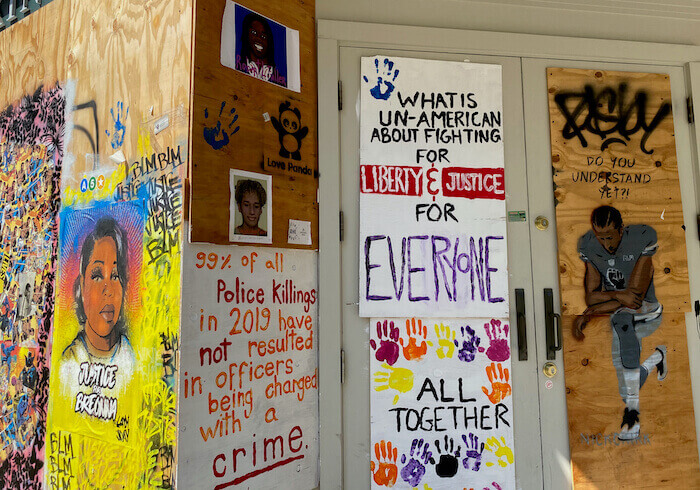 Soho brings to mind designer stores, tourists, overpriced eateries, and people watching. But there is another side to Soho in Summer 2020. On the boarded up cafes and boutique stores, Soho Street art has emerged—raw, illegal, political street art. Statements about the issues we are facing now–Black Lives Matter, Racism, police brutality, and the coronavirus.

I marched in 1989 when Yusef Hawkins was killed in Bensonhurst, Brooklyn. In 2014, I was in Staten Island for the Eric Garner marches. Between then and now, I’ve been to hundreds of marches, including the recent Black Lives Matters protests this year. I hope very much to see a day when we create a world that brings people together as equals and where the color of your skin does not give you a death sentence.

Street art can be beautiful murals that bring art out of inaccessible museums and galleries and onto the streets. It can also be a conversation on the streets. Sometimes it can be both at the same time. The Soho murals do both.

Some of the street art in Soho is signed, but many are not. They were created without permission from the building owners (aka they hearken back to the days of illegal graffiti). Some do not have the polish of other murals that you might have seen. Others do. They are deeply connected to the political and public health crises that we are facing today.

Since they are mainly painted on boarded-up stores and cafes, they are rapidly disappearing. Many have already been painted over or removed when the businesses opened. The rest will surely not be there for much longer. If you want to see Soho Street art, go soon.

This mixed media collage is by Harlem native Savior el Mundo (@saviorelmundo). It’s one of the most interesting pieces that I saw. The crown in the center is a nod to Jean-Michel Basquiat—it was one of his signatures. There is so much going on in this piece—Dr. Martin Luther King Jr., Huey Newton, the Black Panthers. Malcolm X, and Mohammed Ali battling Superman. It brings to life the history and people that brought us to the point today.

Wisdom Lies in Not Seeing Things But Seeing Through Things

Wisdom Lies in Not Seeing Things But Seeing Through Things

From Black Live Matter to the futuristic Post Human to EXR’s eye, this mural gives me a lot to think about. I love “can’t more than one truth exist at the same time.” I agree AND think that truth is a philosophical concept that gets us into a lot of trouble

Justice for Breonna Taylor is by Lady Jday, a French street artist. In her art, she expresses the challenges that women face. Breonna Taylor was an emergency medical technician shot in her home by the police in Louisville, Kentucky. This image is wheat-pasted onto the wall, so it is not the original painting. Many protestors are carrying this image on the streets of New York. The yellow and black BLM on the outside is painted onto the wall.

This mural, Black is Beautiful, is by Nile Onyx, a team of New York Based Latina artists, Vanezza Cruz and Allison Ruiz

Black is Beautiful by Nile Onyx

John Lewis Get Into Good Trouble

This is a stencil of the recently deceased congressman and civil rights leader John Lewis. His famous advice was to “get into good trouble.” He was a close colleague of Dr. Martin Luther King, Jr. and was one of the original freedom riders that tried to integrate the busses from Washington to New Orleans. On the first Selma to Montgomery march, he was beaten during Bloody Sunday.

This mural has two signatures. Buendia Brooklyn is a collective of graffiti artists, MCs and rappers from Sunset Park Brooklyn. The second signature is @The.Creator._  (Manuel Allejandro Pullia), a Brooklyn based artist. It’s a very powerful depiction of a protest going over one of the bridges into Manhattan. Look closely and you will see the names of George Floyd, Michael Brown, Breonna Taylor, and others. 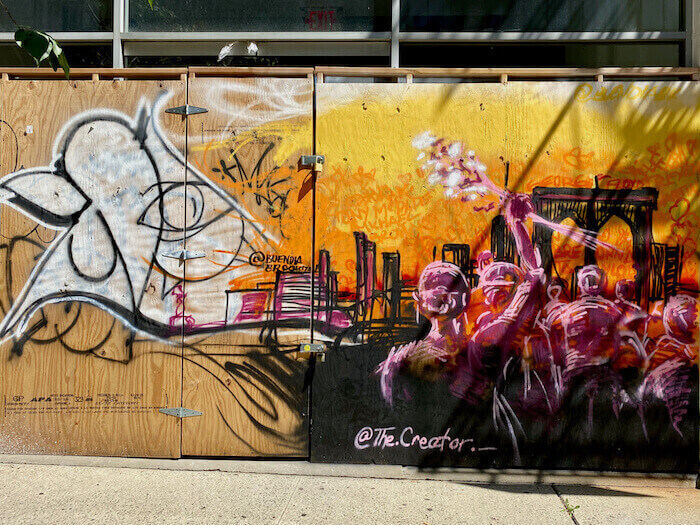 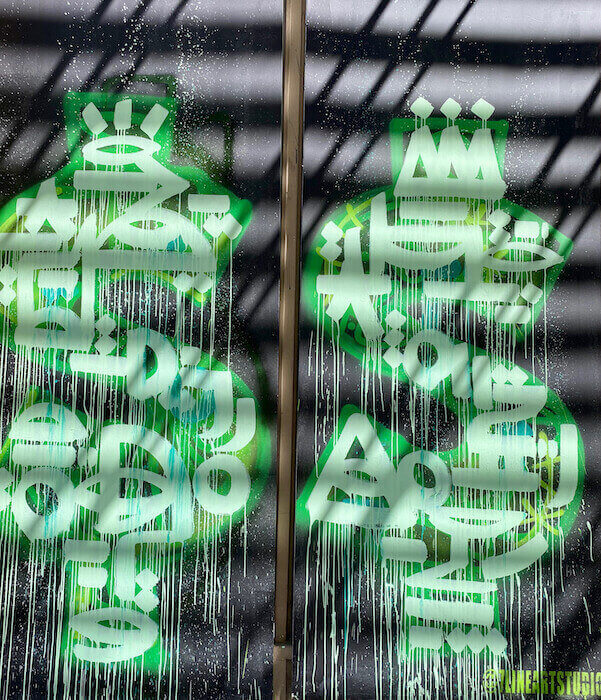 The streets in Soho have many statements about the coronavirus pandemic—painted, wheat-pasted, and stickers. Here are some of my favorites.

This one is by Adam Fu. You’ll also find his work in Bushwick, Brooklyn. He often incorporates neon into his art. He began doing political street art in the early 1990s in San Francisco and now calls New York his home. 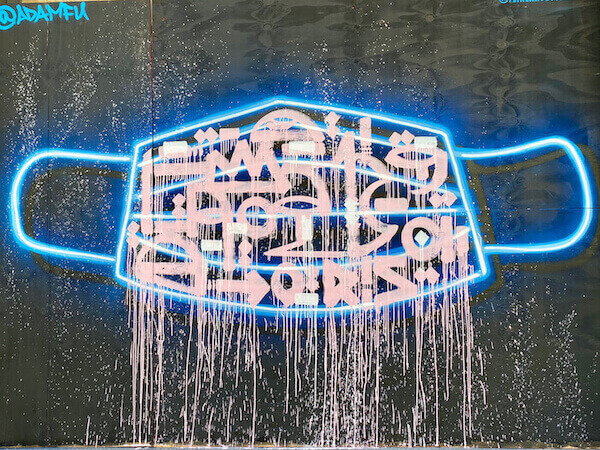 This is by degrupo, (Mauricio Arenas). You’ll find his work all over the city.

This is signed by individualactivist and is a thank you to Dr. Fauci. 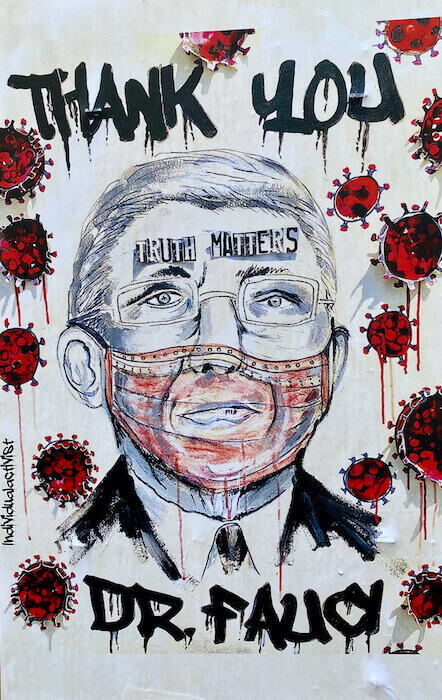 Two months ago, you would have found Soho murals on every street. Now you have to look. Most of the street art on this post was found on Wooster Street between Houston and Canal. I did not see very much on West Broadway. My recommendation is to wander the streets and see what you see. And, to go sooner rather than waiting.

One way that street art lives on is on social media. Take photos and post. Spread the word. And get involved in creating a better future for everyone.

Do You Have A Favorite Street Art Mural? Where is it?

Due to the ongoing COVID-19 (the coronavirus) pandemic, we are not recommending international or domestic travel at this time.  Travel For Life Now covers local and international travel for future planning purposes. We recommend checking local regulations pertaining to sites, shops, restaurants, and other activities before making any decisions about travel. As always, we are guided by the CDC, local restrictions, and health professionals in our decision making. 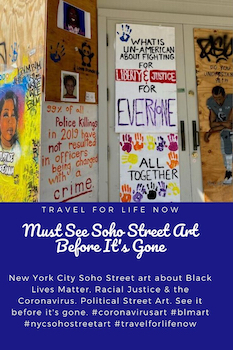 FOLLOW US ON INSTAGRAM
61 shares
We use cookies to ensure that we give you the best experience on our website. If you continue to use this site we will assume that you are happy with it.OkRead more