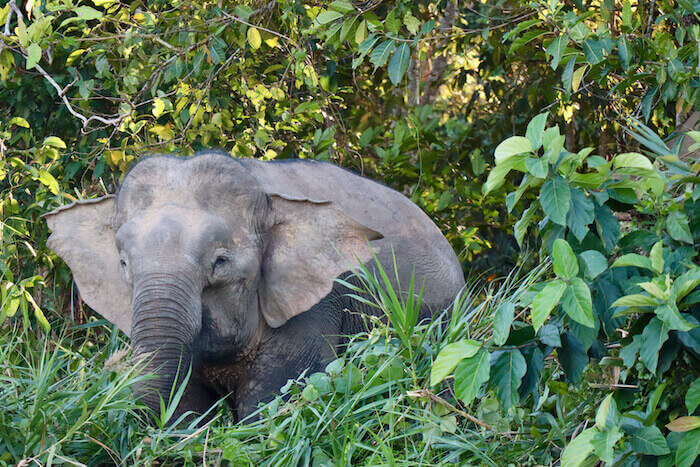 The Kinabatangan River Borneo Night Cruise had been fun and relaxing. It was our last night in Sabah Borneo on the river and we were treasuring the experiences. Orangutans. Proboscis Monkeys. Crocodiles. Elephants. Hornbills. The Borneo Big 5 and much, much more. We waited a long time to do this trip and it was worth the wait.

The boat rocked so hard that we thought we were going to fall into the Kinabatangan River. What happened? Did we hit a rock? Something else? We grabbed each other and tried to catch our breath.

Suddenly, we heard the captain shouting and pointing. “Elephant! Elephant!”

He was clearly upset but also wanted us to see.

He made a sharp turn and pointed. “Elephant! Elephant! Photo! Photo!”

Then we saw it. A lone elephant crossing the Kinabatangan River at night. Mostly submerged. Only its trunk out of the water. We heard the elephant spraying water from its trunk every so often. It’s body occasionally bobbing up.

We watched and listened as the elephant crossed the river. It was an extremely unusual sight to see an elephant crossing alone at night. And dangerous given the crocodiles and other animals in the water.

Finally, it reached a very steep embankment. Was it okay? Was it injured? We squinted from the other side of the river—we didn’t want to get too close to the traumatized animal.

It went ashore and then slowly began climbing up the very steep bank, step by step until it reached the top. Then it walked off into the jungle as if nothing had happened.

So ended our last night safari in Borneo at Sukau Rain Forest Lodge.

The night safari is a real treat in Borneo. Our Lodge had one every evening. The journey starts after sunset when the sky is dark. There was seating for 12 people on the boat and the boat was full. A night safari is an excellent opportunity to see nocturnal animals.

At the same time, there is no guarantee that you will see anything.

The boat captain was our spotter and he had a high beam flashlight to show us where to look. Mind you, he was searching in complete darkness and attempting to catch the reflections in the animal’s eyes while piloting the boat. It was a delicate balancing act.

We had our first sighting before we even left the docks—a stately owl perched near the docks.
Then, we rode around for about 20 minutes without seeing anything. We wondered if the safari would be a bust.

This article may contain affiliate links. This means that if you make a purchase after clicking on the link, we may receive a small commission. There is no additional cost to you.

Then, we came upon the birds.

Owl on the Kinabatangan River

Next thing you know, we were racing to the other side of the river to see a crocodile relaxing on the banks. After that, some proboscis monkeys high up in the trees.

We were enjoying the nocturnal sightings.

Sadly, it was time to return to the lodge.

We were nearing the Lodge when we hit the elephant.

Suddenly, a delightful evening became scary and then unique.

Was the Elephant Injured?

The Pygmy Elephants in Sabah Borneo are endangered with an estimated population of only 1,500 left. Everyone on the boat was worried about the elephant. Was it injured? Bleeding? As we watched it swim and climb up the embankment, it seemed to be moving well.

The Lodge located the elephant (it had a tracking device) the next day to check for injuries. There was no bleeding and it did not appear injured. We were very relieved to hear that. 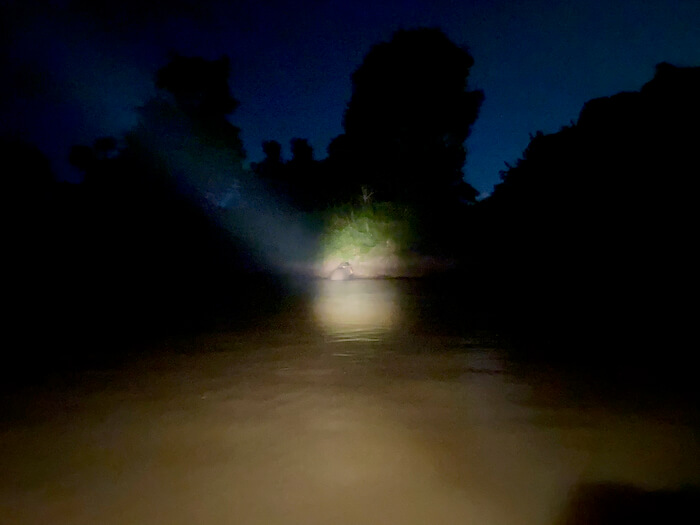 The elephant reached the shore and slowly climbed up and walked into the jungle.

Many people traveling to Borneo choose to hike into the jungle to find the orangutans. And we considered doing that. But hiking in a rainforest is not for everyone. If you’re not up for that kind of experience, then consider a river safari in Borneo. It is can be a challenge to see the orangutans from a boat but we saw plenty.

Have You Had Any Close Encounters With Animals In The Wild? We’d Like To Hear About Them.

Due to the ongoing COVID-19 (the coronavirus) pandemic, we are not recommending international or domestic travel at this time.  Travel For Life Now covers local and international travel for future planning purposes. We recommend checking local regulations pertaining to sites, shops, restaurants, and other activities before making any decisions about travel. As always, we are guided by the CDC, local restrictions, and health professionals in our decision making. 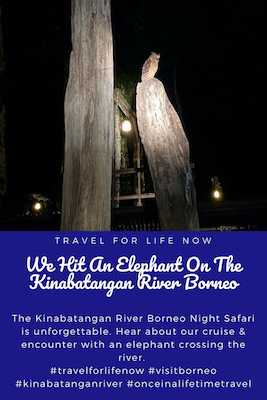 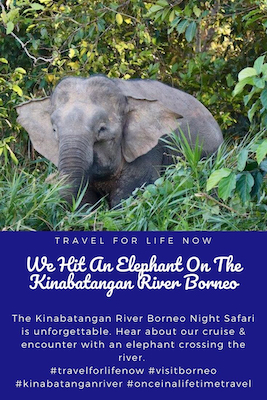 FOLLOW US ON INSTAGRAM
42 shares
We use cookies to ensure that we give you the best experience on our website. If you continue to use this site we will assume that you are happy with it.OkRead more