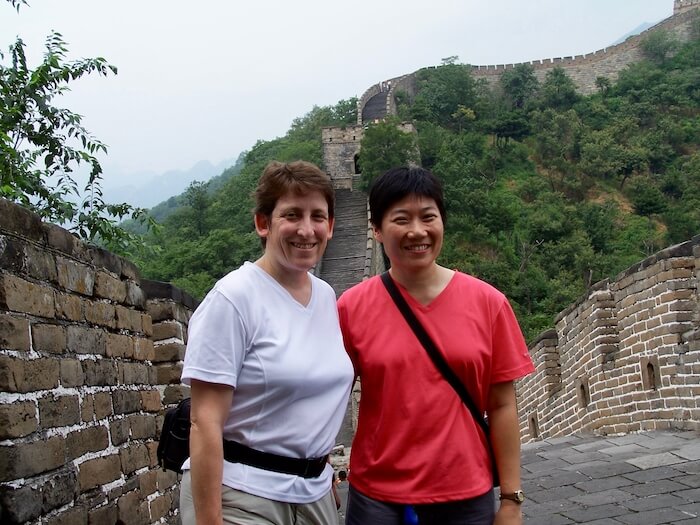 Travel for Life Now (Sue Davies & Regina Ang) are thrilled to have been nominated for a Liebster Award 2019 by Sue from Sue Where? Why? What. We met Sue through the Not So Young Female Travel Bloggers Facebook group moderated by Julie Beckers. We love the Liebster Award because it’s an award where bloggers support, recognize and promote other bloggers with a focus on newer bloggers with fresh perspectives.

SueWhere?Why?What? is an inspiring and down-to-earth and blog for female travelers of all ages. It focuses on solo and budget travel, including tips and ideas for women new to solo travel.

Sue is very supportive of new bloggers. Like us, she is a Baby Boomer (we’ll leave out the exact age). Learning to run a blog at our age can feel lonely, bewildering and sometimes competitive. Not so, with Sue around. She’s always willing to answer a question, share a post and inspire others. Thank you, Sue for nominating Travel for Life Now for a Liebster Award.

Sue of SueWhereWhatWhy began blogging after the tragic death of her husband. At TFLN, we feel close Sue’s story because TFLN Sue’s mom shares a similar history of traveling after tragedy. Sue’s mom ended up traveling to 20+ countries from the age of 62-80 (you can read some of Sue’s mom’s stories here) 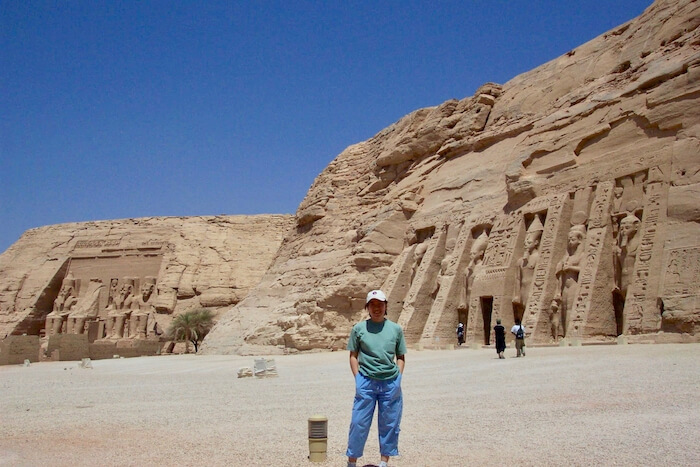 Reggie at Abu Simbel in Egypt

About Travel for Life Now

Travel for Life Now is run by Sue and Reggie. Over the more than 21 years that we have been life and travel partners, we have been to more than 50 countries and 6 continents. We love exploring the world, learning about history and culture, discovering local experiences and sharing what we have found. And, we love street art hunting. We come from the US and Singapore and that history gives us many different cultural, historical and political perspectives on the world—eastern/western, immigrant/non-immigrant, LGBTQ, Jewish and progressive.

We practice curiosity everywhere we travel.

Our blog came into being as a way to share our journeys with family and friends. About 2 years ago, we quit our full-time jobs and became more serious about the blog. And, we began dividing our time between New York and Singapore.

Travel for Life Now focuses on independent women travelers that are looking for authentic local experiences on- and off-the-beaten track. We provide inspiration and practical tips for traveling in the US, Southeast Asia and Europe with a special focus on Street Art, Street Food and Street Culture. Our blog delves into the cultural, historical and political context of the sites we cover. We blend risk taking, soft adventure and affordable luxury with fiscal prudence and safety. Travel for Life Now is based in New York and Singapore.

What is your next travel destination & why did you choose it?

We haven’t chosen our next travel destination yet. We expect to spend part of the winter in Singapore (Reggie’s home country) and to do some trips from there. Last year, we visited Hanoi, Phnom Penh and Penang. We haven’t been to Australia or New Zealand so we are hoping to get there this year. Myanmar, India, Japan and Israel are also high on our list. All of these places have interesting historical and religious sites. 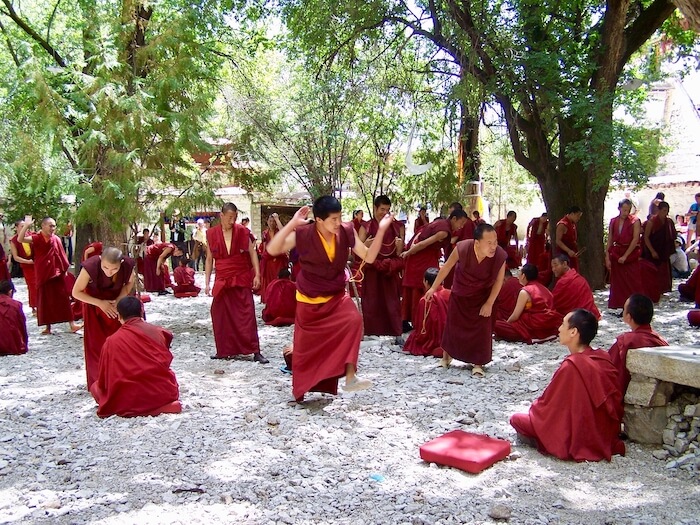 Monks Debating at the Sera Monastery in Tibet

Where is your favorite “secret” destination that most others wouldn’t know about?

We have a friend in France with a weekend home in the French countryside just outside of the Champagne region. The town has a population of 13 which swells to about 20 on the weekend. There are fruit trees and a garden, wonderful homegrown and homecooked food. And, delightful company in a gorgeous and tranquil setting. It is a great contrast to New York and Singapore where we are based.

What is the funniest thing that has happened to you on your travels?

We have had many adventures with jetlag and trying to do too much on the first day. There was the time that we fell asleep during the Moulin Rouge performance. Yes, it was loud and noisy. And time on the Hop on Hop off bus in Rome when we kept waking up somewhere new. Our favorite moment was in Paris. It was was a short stopover on our way to Morocco. We had been to Paris several times, but had missed the Rodin Museum every time. After our overnight flight landed and we checked in, we made a dash for the Museum. We arrived, saw the famous Thinker sculpture in the garden. Then, we made the mistake of sitting down. And soon, we were snoozing. We slept until the guard woke us up to say the museum was closing. That’s the closest were ever got to seeing the Rodin Museum.

If you could invite anyone to dinner, alive or dead, who would you chose & what would you ask them about?

Genghis Khan would be one of several choices that we would make. The story of Genghis Khan has mainly been told by the western civilizations, many of which were conquered by the Mongols. He also conquered vast territories in Asia. He is known mainly as a brutal military leader. But there is more to the story.  He unified many disparate tribes. Instead of ruling by ethnicity and race, he created a meritocracy and established a civil and military code. He was of the Tegrist faith, but very tolerant and interested in other religions. He studied Buddhism, Taoism, Islam and Christianity. We’d like to talk to Ghengis Kahn about this period of history, his wars, how he unified the tribes, created an empire and how he developed his perspective on religion.

If you could only watch 1 movie for the rest of your life which one would you choose?

This question is impossible to answer.

Reggie suggested that Sue pick Philadelphia as she cries every time she watches it. Philadelphia came out in 1993 and was one of the first mainstream movies about the AIDs crisis. At the time, Sue was working for an AIDs program for children and families with HIV (mainly poor, Black and Latino women and children) and had many friends die of the disease. AIDs was devastating the LGBTQ, African American and Latino communities. In the 1980s, Sue was one of the founders of ACT-UP in Philadelphia. Jonathan Demme, the director of the film, did a benefit showing of Philadelphia for Sue’s program.  Paris is Burning is another favorite—it came out in the early ‘90s. It is an unvarnished showing of the poor and working class African American, Latino, and transgender communities—the Balls, AIDs, sex workers, violence and poverty. 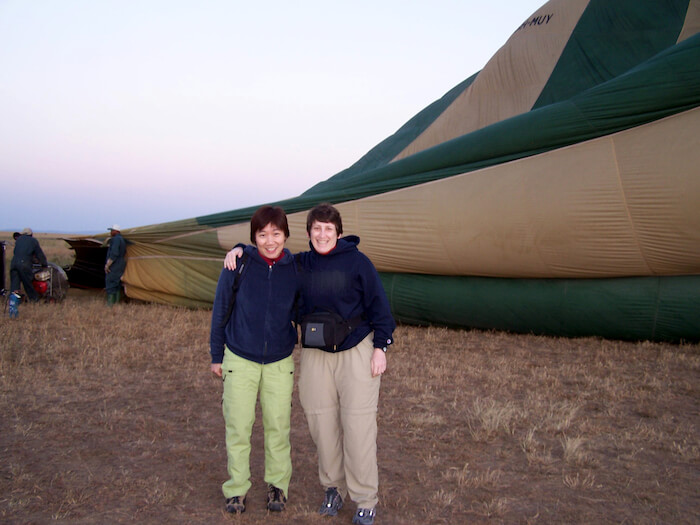 Sue & Reggie after taking a balloon ride over the Serengeti

Carrie Ann Karstunen and Should be Cruising

Catherine Brady and Traveling With the Littles 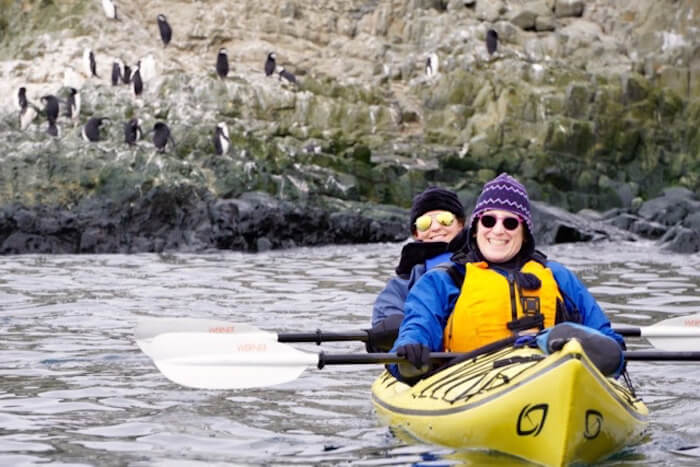 Here are the 2019 Liebster Award rules: 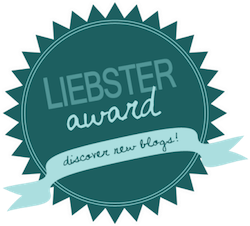 The Liebster Award is about sharing and supporting our fellow bloggers. We are glad to be part of this process. And, we encourage you to share this post with others, to visit SueWhereWhyWhat and our nominated bloggers.

How has travel changed how you see the world, including your home country?

Please share one of the most meaningful relationships or conversations that you have had while traveling.

If you could go anywhere for any length of time, where would you go and why?

We travelers have an impact on the places that we go and the people that we meet. Many of us travel in places with extreme poverty and places deeply affected by climate change. How do you think about this?

We live in an increasingly interconnected world but still have national borders, visa, immigration quotas. What do you think we need to do to create a more collaborative world? 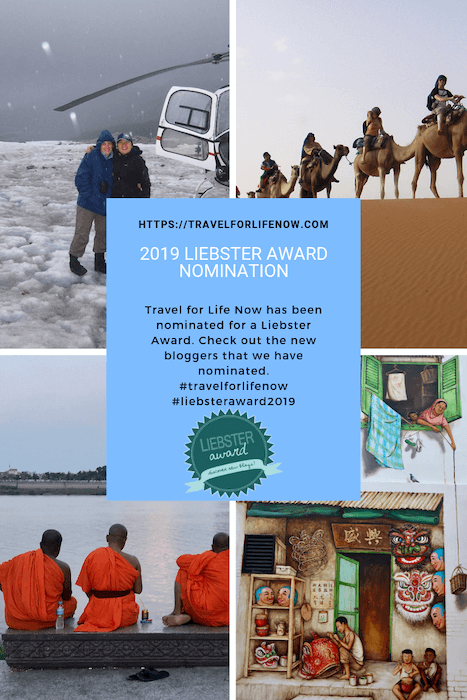 FOLLOW US ON INSTAGRAM
14 shares
We use cookies to ensure that we give you the best experience on our website. If you continue to use this site we will assume that you are happy with it.OkRead more