Places We Have Slept

Reggie and I have been to dozens of countries together. We think very carefully about our accommodations with location being the most important criteria. The places we have slept range from very moderate to some splurges on eco lodges. There are times, however, that we had no choice and just had to to to sleep. Here are some of the more unusual places we have slept.

“Miss. Miss.” I feel my shoulder shake. “We’re closing. You’ll need to get up,” said the security guard. I opened my eyes and looked at him. Not sure of where I was for a moment. I saw Reggie lying down on the bench next to me. Then I saw Rodin’s The Thinker right behind the guard. I remembered. We were in Paris on a stopover on our way to Morocco. 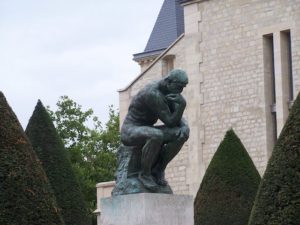 Near The Thinker in the Sculpture Garden at the Rodin Museum is one of the places we have slept.

We had been to Paris a number of times and had never made it to the Rodin Museum in time to see it and the gardens. Well, we finally made it. I walked up to The Thinker sculpture and admired it. We walked around a little more and admired Rodin’s work. Then we sat down for a moment. We were so jet lagged that we  promptly fell asleep. We slept the rest of the afternoon until the guard woke us up. By the way, we had tickets that night to the Moulin Rouge. it is a very good (and loud) show. We slept through most of the performance.

While we are on the subject of jet lag and trying to do too much after an overnight flight, let’s take a look at places we have slept in Rome…

Hop on Hop Off Bus, Rome

Rome is a magnificent city. I have spent many a day there wandering the streets, at the Vatican, seeing the Coliseum.  Walking the streets of Rome is one of my favorite things to do. On this trip, we had only one afternoon for an excursion before we were on our way to a cruise of the Greek Islands. This time, we decided to try something different. We taken Hop on Hop Off buses in Berlin and many other places. We booked ourselves on the Hop on Hop off Bus for a ride around the city. We thought we’d get off at a couple of places we’d never been before.

Once again, jet lag overtook us. We kept nodding off and waking up in a different place. Looking out the window, we  would recognize one of the sights of Rome. Then, we’d fall back asleep. We decided it was best not to fight it, so  we kept sleeping, waking up and looking out the window, occasionally taking a picture, then falling asleep again. It was certainly a unique way to see the city.

Of course, some of the places we have slept, we actually planned on sleeping in, including the Snow Hotel in Norway and the Sahara desert in Morocco. 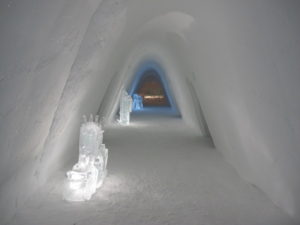 Hallway of the Snow Hotel in Kirkenes Norway

The Snow Hotel is in Kirkenes, Norway (pop 3,500) above the Arctic Circle is one of the more adventurous places we have slept. It was January so you can guess how cold it was. The Hotel is rebuilt every winter and opens in Mid-December. The 20 rooms and hallways are decorated with exquisite ice carvings. We were given a sleeping bag and a balaclava to cover out heads. As we snuggled into our sleeping bags ready for a good night’s sleep, we felt warm and comfortable.

We had followed the directions to not drink too much so as to avoid having to get up in the middle of the night. Then, came morning. We were freezing! Who’s crazy idea was this? We got out of bed and into our boots. Ready to run to the sauna in the next building. But, hold on, the floor was snowy and slippery. I never walked so carefully and quickly in my life. Finally, we arrived at the sauna to defrost and get on with our day—thankful that we had only booked one evening in the Snow Hotel. And, that we had lived to tell the tale…

For more on this adventure, check out my post on Sleeping in the Snow Hotel.

Onto another extreme. The Sahara desert.

Sleeping in the Sahara Desert

As you may recall, we had a nice nap in the Rodin Museum Sculpture Garden on the way to Morocco. We had a wonderful two-week trip through Morocco which included a night in a camp in the Sahara. Did I mention that it was July? And that during the day the desert was 120 degrees Fahrenheit (49 Celsius). We left for the camp in the evening when the temperature had gone down to a comfortable 80+ degrees (27 Celsius). After riding camels for about an hour into the desert, we met our Berber hosts and ate a wonderful tagine dinner. We also climbed a huge Sand Dune to watch the sunset and could see all the way to Algiers according to our guide. 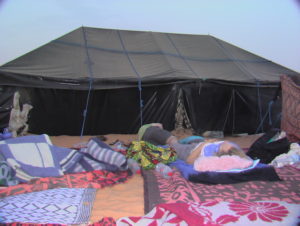 Sahara Desert. In the morning after the sand storm ended. Some people slept in the tent and others outdoors.

We crawled into our blankets for our well deserved rest. An hour later came the sand storm. It was raining snow into the tent. A very steady rain of sand fell on us for hours. Reggie went outside to try to sleep while I stayed in the tent. We covered our heads until it became too warm, then uncovered them until it became too sandy. And so on, throughout the night. As soon as the morning came, the sand storm ended. We were quite happy to get back on our camels to return to a medina for a long shower where we attempted to get the sand out of our hair.

Places We have Slept: The Overnight Train to Datong

When we traveled through China, we very much wanted to see the Hanging Monastery and the 10,000 Buddhas near Datong in Inner Mongolia. We decide to save time by taking the overnight train. We figured that we could save a day by sleeping on the train. The train compartments had two small bunks and could sleep a total of 4 people. We decided to book 4 tickets so we we would not have to share the little compartment with strangers. That turned out to be a very wise decision. 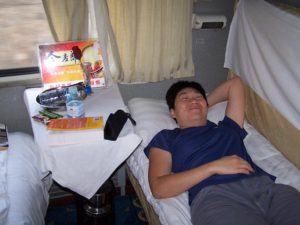 Reggie on the bottom bunk of the sleeper train from Beijing to Datong.

Most of the people boarding the train were Chinese and spoke no English. After boarding, we watch the compartment next to us as people kept pouring in. Do you remember the clown car act from the circus? Where 20 clowns crawl into a small car?  I am not sure exactly how many people were in that compartment, but it was easily more than a dozen. And, they all had very large bags. They spilled out into the hallway. We heard them all night as they spoke in Mandarin and smoked cigarettes. Needless to say, we did not sleep a wink. We did have a wonderful time in Datong.

And one last, unintended sleep. On a volcano.

Sleeping on a Volcano

Ol Doinyo Lengai is a sacred Mountain in rural Kenya with an active volcano caldron at the top. I have been intrigued by volcanos for a long time and really wanted to see the sunrise from the top of the volcano. At 9 pm, I began the climb with Julius, a Masai Guide. By midnight and covered in volcanic ash, I had to bow my head to the volcano as I would not be able to complete the ascent. I thought we would immediately turn around and go back….until Julius said it was too dangerous and we would have to sleep on the side of the volcano until the dawn. And sleep we did—or at least he did. For a full report on this one, you’ll have to check out my post on Women Who Explore.

What interesting places have you slept? Any places on your list you haven’t been to yet?

FOLLOW US ON INSTAGRAM
24 shares
We use cookies to ensure that we give you the best experience on our website. If you continue to use this site we will assume that you are happy with it.OkRead more