Merapi Volcano Tour Best Things to do in Yogyakarta 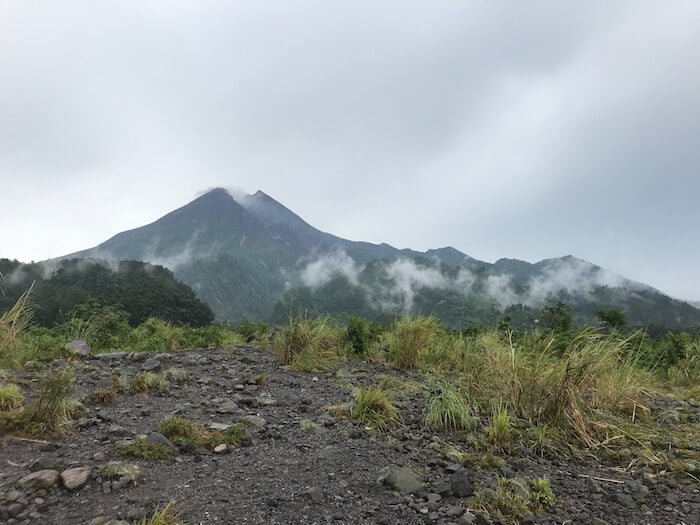 Merapi Volcano Tour. Best things to do in Yogyakarta

One of the best things to do in Yogyakarta is a Merapi Volcano Tour. We did this as part of a Yogyakarta Day Tour which we started from Borobudur. Most people stay in Yogyakarta City and do this as a day tour from there.The day included Kraton, the Merapi Volcano tour, Prambanan and then a stop at a durian stand on the side of the road.

Best Things to do in Yogyakarta

Yogyakarta is a city in central Java. Jogja, as is it fondly called, is a 2-3 hour flight from Singapore. Borobudur and Prambanam are the Unesco Heritage sites and very interesting to visit.

You can read our post on Borobudur, Mendut and Prambanam

Merapi is an active volcano. The last major eruption was in 2010, though there were a smaller ones in 2013 and 2018. In 2010, the eruption significantly changed the mountain by collapsing part of the crater and covering the mountain with lava. More than 300 people were killed and 320,000 had to be evacuated. In early June 2018, an eruption sent a column of ash 6 kilometers high. Fortunately, it was a calm day when we were there.

During our Yogyakarta Day tour,  we didn’t go near the crater on the Merapi Volcano Tour. We saw the volcano crater from afar and drove through the lava flows from the 2010 eruption. The ride is rather bumpy and dusty. It was raining when we were there so that helped with the dust.

Take a look at our ride here

During the Merapi Volcano tour, we went to the “museum” first. The museum is in one of the villages that was partially covered in lava. We saw objects that melted during the eruption.  After that, we want to alien rock which is a huge rock that was thrown from the eruption. We also went to see a bunker which has been used as a shelter during eruptions. And then, we went bumping back down the mountain.

There were tons of jeeps tours on the mountain while we were there. There are touristy shops at many of the places we stopped on the mountain and places to eat. It was a fun couple of hours, but probably not for everyone.

Kraton–Palace of the Sultans of Yogyakarta

Completed in 1790, the Kraton (the Palace of Yogyakarta) is a great example of Javanese architecture. The Yogya Sultans built and used this as their palace. A walled city said to have housed up to 25,000 people, it is oriented north and faces Mount Merapi. Kraton is still used as a residence for the sultan and for ceremonial events. It is only open in the morning. In the afternoon, women apply traditional methods to cleanse the space of evil spirits.

Sri Sultan Hamengkubuwono X, is the current Sultan and the 10th ruler of Yogyakarta. His father was the previous Sultan. He was democratically elected as Governor of Yogyakarta 1998–unusual since the Sultan is automatically appointed as governor. He has 5 daughters and supports his eldest daughter as his successor even though tradition has it that only men can be Sultan.

While we were at the Kraton, there was a performance of shadow puppets and traditional music. There were many school children who had apparently been given an assignment to practice their English on tourists. They interviewed Sue many times. 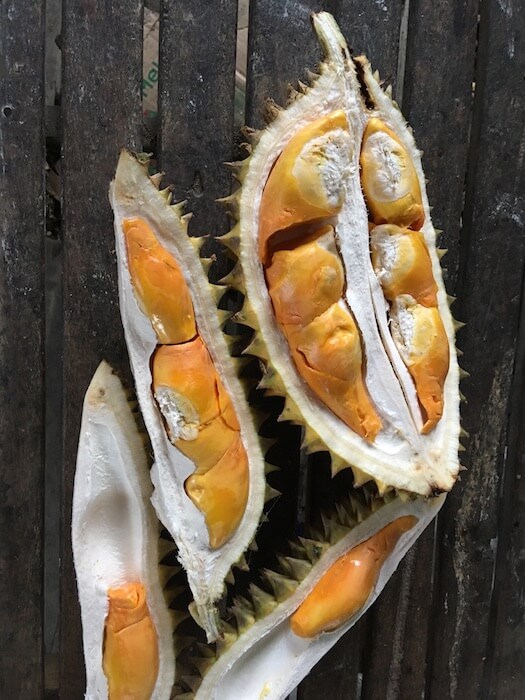 Durian. Not for the faint of heart. Merapi Volcano Tour

Durian is a well loved fruit by many people in Indonesia, Singapore, Sri Lanka, Malaysia and other places. Eating it on the side of the road when it has been freshly picked is a treat for some (Reggie) of those living in the US . For others (Sue) it is stinky and doesn’t taste very good. You’ll have to try it and decide for your self.

Where to Stay in Borobudur 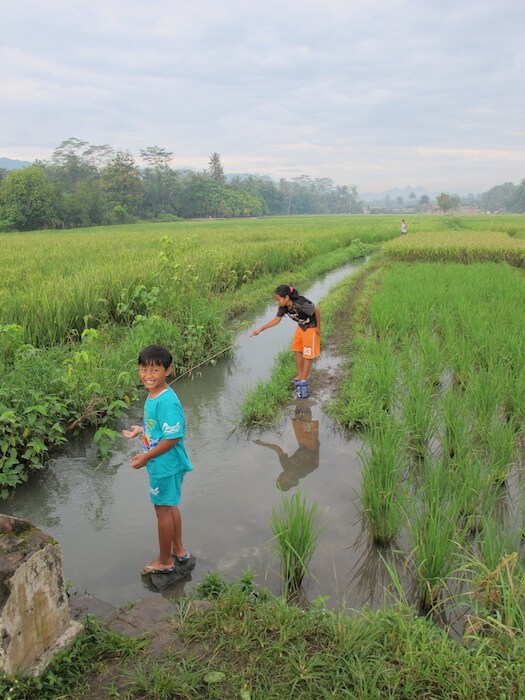 We enjoyed our stay at Rumah Dharma. It is a pleasant 20 minute walk  to the Borobudur Temple. Rumah Dharma has 8 bungalows ($106 for 2 nights, double occupancy) and located in the middle of rice paddy fields. There is a small swimming pool. Each room has a covered patio with chairs and couches. You can have your morning coffee served outside or enjoy cold drinks admiring the sunset at the end of a long hot day. Rooms are nicely decorated with huge bathrooms with rain shower heads.

Guests can use bicycles for free. Rumah Dharma does bicycle tours to the local villages to see tofu making and pottery demonstrations. They also do sunrise bike tours to Borobudur. We suggest doing the pottery on one of your first days so it has time to dry before you leave.

Rumah Dharama has amazing food and it was very inexpensive for a 4 course lunch or dinner The staff at Rumah Dharma were excellent and very attentive.

Have questions? Been to Yogya? Leave a comment. We’d love to hear from you. 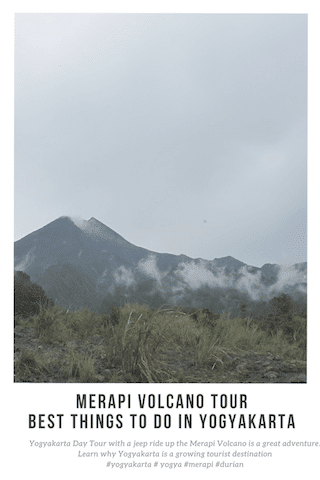 FOLLOW US ON INSTAGRAM
212 shares
We use cookies to ensure that we give you the best experience on our website. If you continue to use this site we will assume that you are happy with it.OkRead more