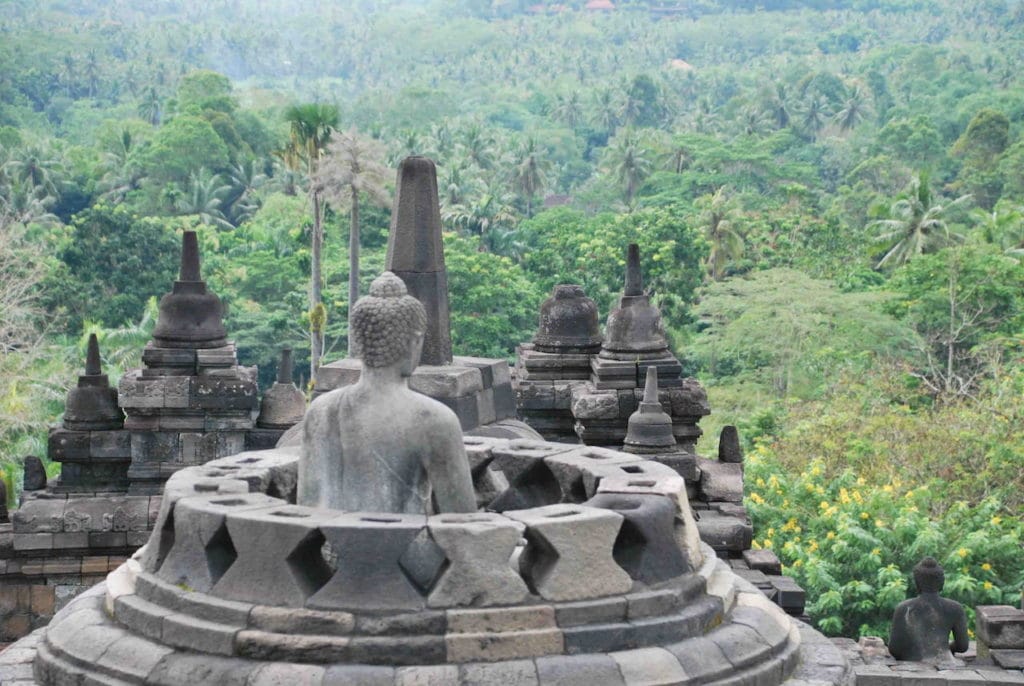 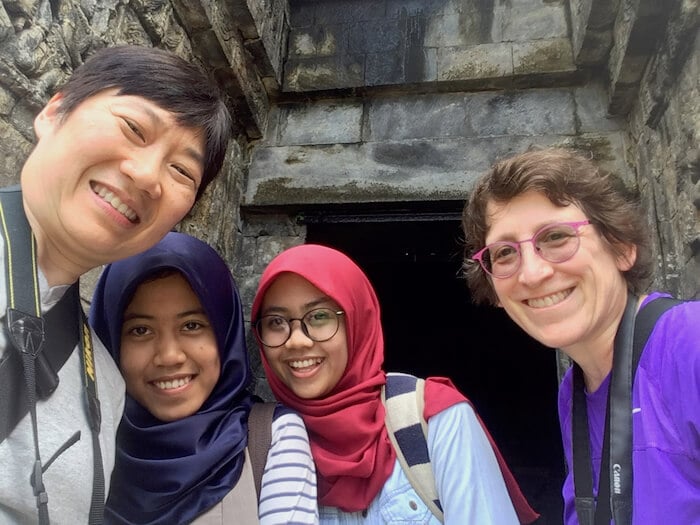 Yogyakarta is a short 2-3 hour flight from Singapore. Since we had a free weekend, we decided to spend it in Yogyakarta. Three days is not nearly enough time for all of Yogyakarta. We concentrated on seeing the Temples and sites near Borobudur Indonesia. We also went in February–rainy season. And it rained. Everyday.

We are Turis hunters

“We are turis hunters”, said the two young Javanese women at Mendut, one of the temples on our Yogyakarta Itinerary. This was during a Borobudur Tour in Indonesia.

What do you mean? Turis Hunter?

“We want to practice our English, ” they said “And in return we’ll share our snack with you.“

It was an offer we couldn’t refuse.

We met Sekar and Hani at the Mendut Temple, a 9th century Buddhist Temple in Central Java, 3 kilometers east of Borobudur. This temple was part of our Yogyakarta itinerary and is very important to the Javanese people. Our conversation began as we were eavesdropping on them as their teacher, Mr. Seneng, explained the carvings in the temple. The five of us were the only people at the Temple at that time. When he figured out that we were listening, Mr. Seneng switched from speaking Javanese to English.

Hani and Sekar are 19 years old. They are from Temanggung in Central Java. Hani told us that she likes to go up to strangers. She said that in Indonesia, the Javanese must be friendly and kind to everyone, most importantly the turis (tourists). This was certainly our experience on our  Borobudur tour. The Javanese were warm and friendly everywhere we went. And, the young people often wanted to practice speaking English. At the Sultan’s Palace (Kraton) in Yogyakarta, 5th grade students besieged Sue. Apparently, their teachers had given them an assignment to do a survey in English. They quickly seized upon Sue as a likely English speaker. You’ll meet some of these fifth grades in another post. 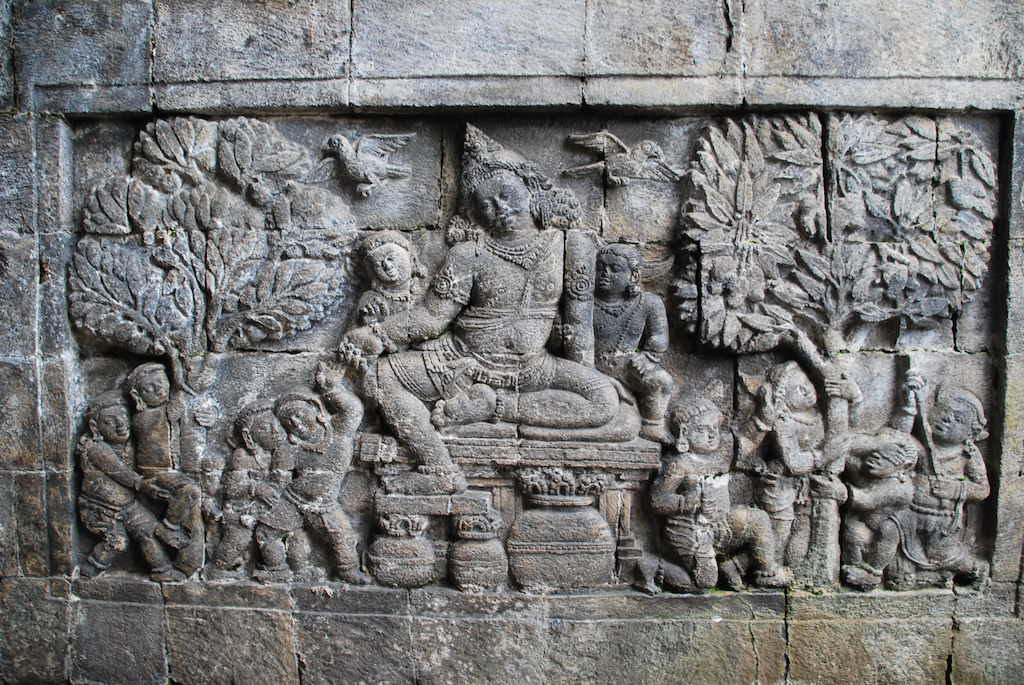 Built around the early 9th century, Mendut is the oldest of the 3 Buddhist Temples (Mendut, Pawon and Borobudur) in Central Java. It is a compact temple with a square base as is typical of the architecture from the period.  Devotees walk around the square terrace in a clockwise direction.  The outer walls are adorned with bas reliefs of Buddhists divinities and there is a main chamber with 3 large stone statues.

Buddhists in Indonesia observe the Vesak annual ritual by walking from Mendut to Pawon and then Borobudur.  For local Javanese, praying in Mendut temple is very important and is believed to fulfill wishes.

In case you are wondering, they did share their snack with us. Its was delicious–homemade tofu and rice.

Yogyakarta Itinerary. View from the Top of Borobudur Temple

Built from 2 million stone blocks in the form of a mandala, the monument was “conceived as a Buddhist vision of the cosmos in stone”. The Temple has 3 levels: the world of desire (lust), the world of form and, finally, the world without form. On the top level, the world without form, you will find the stupas, some with a Buddha statue rising from within. The stupas are built in a circular direction around the main stupa. There are 2,672 relief panels and 504 Buddha statues in the Temple.

Borobudur in the Rain 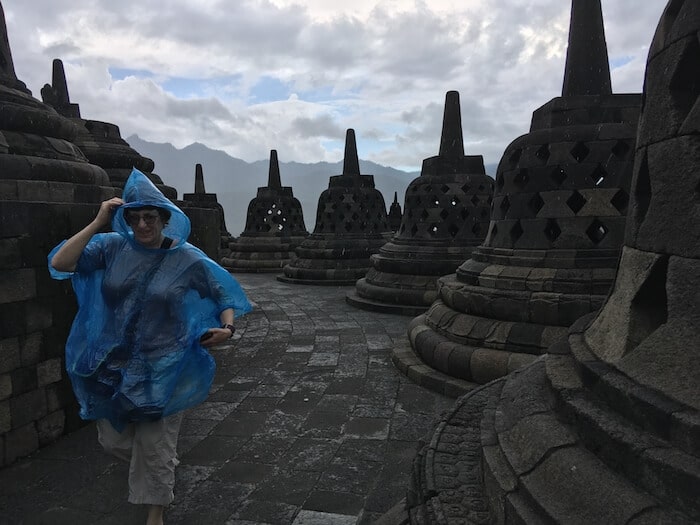 We checked into our hotel Rumah Dharma. After a refreshing tea and conversation, we set off on our Borobudur Tour. A short ten minute walk and we were at the temple. We intended to walk each level concentrically as we made our way to the top. As we finished the first level, the few drops began to fall. This is a fact of life in Borobudur during February–the clouds can roll in at any moment. We decided to go directly to the top to see the view before the downpour.

One night the Temple was lit at the top. We watched from our hotel while we listened to the call to prayer from the eight mosques that surrounded our hotel.

Many people go to see sunset or sunrise from the top of Borobudur.

Unfortunately for us there were no sunset sightings as the days were rainy and dusk came early every day. Nevertheless, it was awe-inspiring.

Prambanan, a Hindu Temple, is also a World Heritage Site. It is the largest Hindu Temple in Indonesia and one of the largest in Asia. Built in the 9th century, the Temple is dedicated to Brahma (the creator), Vishnu (the Preserver) and Shiva (the Transformer). The central building more than 150 feet tall. Smaller temples surround it. it was a very impressive sight. As usual for our three-day trip … it rained.

Still to come–all the photos that I could not fit into this post! Plus, Merapi Volcano. And, of course, the fifth graders. 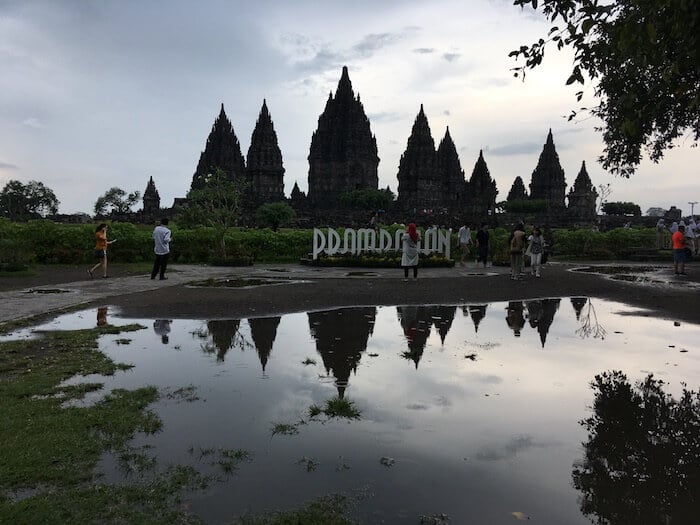 For more Temples in Asia–the Temple of the Sacred Tooth Relic in Sri Lanka is a must see.

Please leave a Comment. Have you been to Yogyakarta? Borobudur Indonesia? 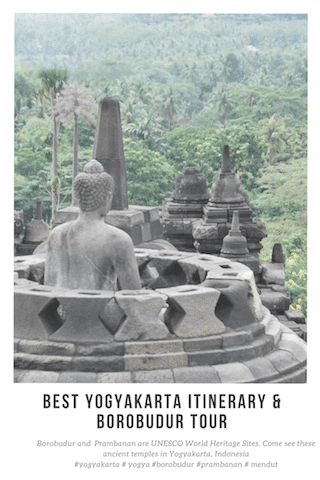 FOLLOW US ON INSTAGRAM
0 shares
We use cookies to ensure that we give you the best experience on our website. If you continue to use this site we will assume that you are happy with it.OkRead more