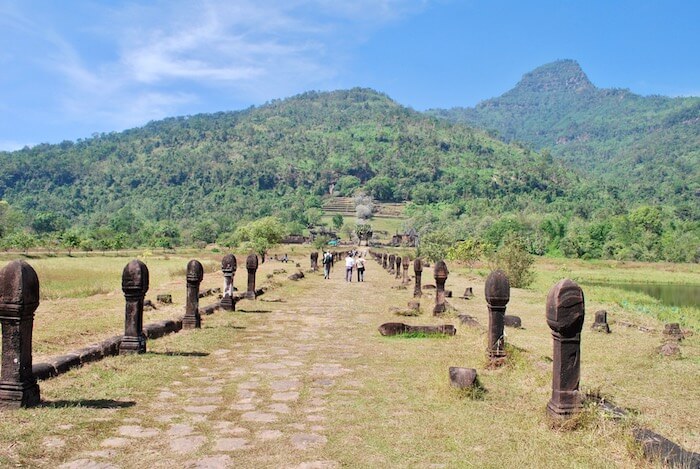 Laos is one of the most relaxing places in the world. We spent hours on our balcony watching Mekong River Cruise Luang Prabang. Took a million Luang Prabang Photos. Visited Wat Phou, Vientiane and spent hours in boats on the Mekong River. We ate a ton of fish from the Mekong. Gave offerings to the Monks. Took a cooking class and biked all over town.

We went to Laos because we wanted to see Wat Phou, a Khmer Hindu (now Buddhist) Temple Complex in Southern Laos on the Mekong River. It is 1,000 years old and was part of the Khmer (Angkor) Empire that was centered in the Angkor Wat temple complex in Cambodia. Wat Phou pre-dates the Angkor Wat by about 100 years.  It is a UNESCO World Heritage Site.

Wat Phou means “temple on the mountain” in Laotian. It is in South Laos along the Mekong River. We flew into Pakse and took a 2 hour cruise to Champasak and then a shorter car ride to the Temple Complex. 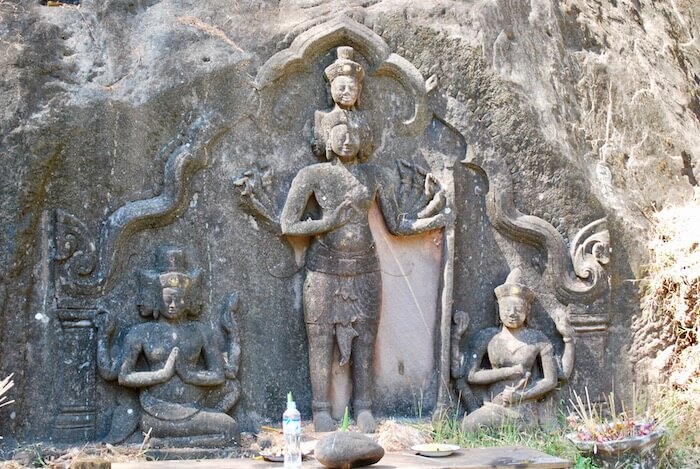 It was magical and peaceful at the complex and we were glad to have made the effort to get there. We then took a boat to Khong Island where we spent the night.

Traveling around Asia? Check out the UNESCO World Heritage Sites in Borobudur in Indonesia, too. 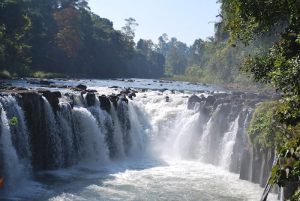 The next morning we were excited to get back on the Mekong and proceed to Lihpi waterfall on the border of Cambodia and the 4000 islands area. The only problem was that our boat did not show up. We spent an hour waiting. While we waited, we watched a man bailing water out of his boat. Our guide finally came back and said he had good news. He found another boat to take us and led us to the boat that we had been watching. We took one look at him and politely refused to get in the boat that still had inches of water in the bottom of it. Finally, he found us another boat that was not in danger of sinking. 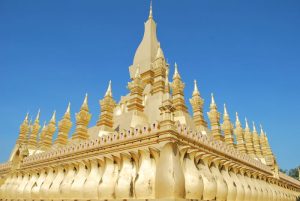 We spent a couple of days in Vientiane, seeing Pha That Luang and enjoying the city before heading on to Luang Prabang. Pha That Luang was originally built in the 1st century, then rebuilt as  Khmer Temple in the 13th century and was rebuilt a third time in the 16th century. Like many temples, it went from being a Hindu Temple to a Buddhist one and was destroyed during a Thai invasion in the early 1800s. The French then restored it in 1900.

One of our favorite experiences in Vientiane was eating at Makphet Restaurant. The restaurant is staffed by homeless young people. They are trained to be chefs, wait staff and for a career in the food service industry. It wasn’t just a good meal, it served a purpose and gave back to the community. The young people were very engaging and had hope for their future. We recently checked on this restaurant and is it temporarily closed while they look for anew space. we hope that they find it soon.

In some ways, this temple reflects the entire history of Laos over the past 2,000 years. 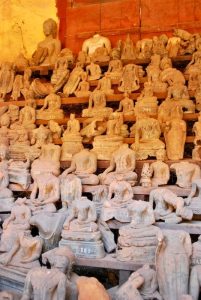 After the adventure of Southern Laos and Vientiane, it was time to slow down, enjoy the city and take plenty of Luang Prabang photos. We rented bikes for the rest of our stay and cruised by bike all over the city. We took a cooking class at Tum Tum Cheng and visited the night market numerous times.

Luang Prabang is lovely with cafes, lots of hostels, and good and cheap food. We loved the street food, especially in the alley by the night market.

One afternoon, we rode our bikes to That Phu Si. Little did we know how many stairs we had to climb to the top. The view at the top was worth the climb. Then we realized that this was the temple that we saw from the plane. We watched a man making an offering and setting doves free. It was beautiful to watch.

We returned to the river in kayaks to see the Pak Ou Caves and the thousands of Buddhas. We used Green Discovery for this trip. It was a nice change of pace from the traditional Mekong River Cruise Luang Prabang. It was a long kayak trip and we arrived at the caves after the hordes of tourists had left. The lower level cave was better lit, though the upper-level cave was also good to see. There weren’t that many tourists and we had time to feel the specialness of the place. we spent a lot of time sitting on our balcony at the Sala Prabang Hotel, eating Lao chips, drinking Lao beer and watching the Mekong river go by. We considered this Mekong River Cruise Luang Prabang style.

Or how about a Drone for aerial photos? 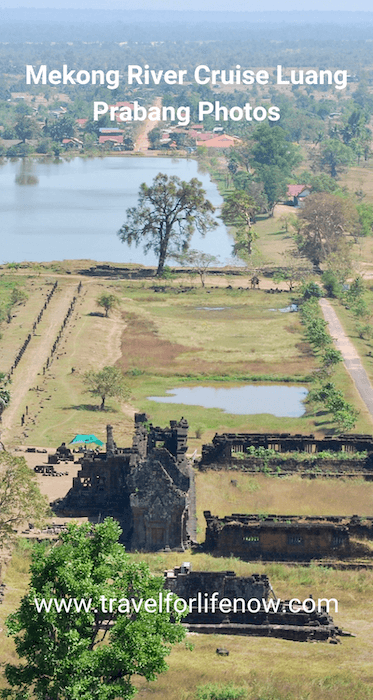 FOLLOW US ON INSTAGRAM
242 shares
We use cookies to ensure that we give you the best experience on our website. If you continue to use this site we will assume that you are happy with it.OkRead more