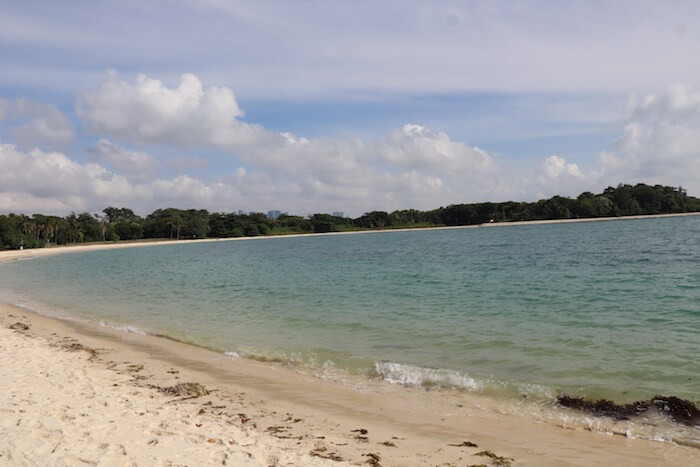 Imagine yourself on a beach. Waves gently lapping at the shore. A slight breeze cools you off. It’s quiet and peaceful and you have the beach to yourself. You left the hustle and bustle of Singapore about 45 minutes ago. You didn’t bring your passport or get on an airplane. Where are you? St. John’s, Kusu or Lazarus Island, one of the cheap and easy short trips from Singapore.

When it comes to beaches, St. John’s, Kusu & Lazarus Islands are the best kept secrets in Singapore. Well known to locals for the clean beaches, clear waters and good fishing, the islands have yet to be discovered by the many tourists visiting Singapore. All three islands are easily reached via the Singapore Island Cruise ferry. It stops first at St. John’s and then goes onto Kusu Island before heading back to Singapore. Lazarus Island is a short walk from the St. John’s ferry stop.

A mere 6.5 KM from Singapore, St. John’s is the largest of the three islands. It is the only one that has overnight sleeping facilities. There are bungalows and dormitories for rent but they are being renovated so are currently closed until mid-2019.

According to some stories, St. John’s (originally called Palau Sakijang Bendera) was the place that Sir Stamford Raffles first landed in 1819 when he claimed Singapore as a British colony.

In the late 1800s and early 1900s, it was used to quarantine cholera, beri-beri and leprosy patients. During World War II and the Japanese occupation of Singapore, St. John’s was a prisoner of war camp (POWs). After the war and during Singapore’s efforts to gain independence from Britain, St. John’s was used to house political detainees. Devan Nair was one of the detainees. He went on to serve as Singapore’s 3rd president from 1981-1985. In 1975, St. John’s was turned into a resort island.

Also known as cat island, you see many stray but friendly cats sunning themselves everywhere on St. John’s.

St. John’s is a great spot for picnics, swimming and fishing. The Marine Park Outreach and Education Centre and the National Marine Laboratory is housed on the Island. We recommend visiting the education center. It is small but has good presentations about the ecology, flora and fauna of the islands.

Large parts of the island are currently closed due to the construction. Many visitors make the short walk to Lazarus Island instead of staying on St. John’s.

Lazarus Island is a 10 minute walk from the pier at St. John’s. Walk another 10 minutes after you cross the causeway to get to the beaches. The walk is paved and easy. You’ll pass by the mangroves, heritage trees and, possibly, monkeys on your way to the beaches. The beaches are beautiful and quiet. The water is very calm for children. We had them almost to ourselves while we were there. Many people on our ferry went immediately to Lazarus. We saw people fishing off the causeway that connects Lazarus to St. John’s.

For more secret and off-the-beaten track Singapore experiences, read Why You Should Go To Thaipusam Singapore

After spending a couple of hours at St. John’s and Lazarus, we hopped back on the ferry for a short 20 minute ride to Kusu Island.

Kusu (or turtle in Chinese) is the smallest of the islands. There are many stories about how Kusu Island was formed, most involve a turtle turning into an island to save shipwrecked sailors. It has a turtle sanctuary in keeping with the stories about the island.

We were very interested in seeing the Chinese Temple and the three Malay shrines.

Da Bo Gong Temple is for the worship of two deities, Da Bo Gong and Guan Yin. The first, Da Bo Gong, is said to cure diseases and calm the seas while Guan Yin is the goddess of mercy.

For more outdoor, unique destinations with temples, hop on a plane and go to Japan from Singapore.

After walking through the Temple, we hiked up the 152 steps to the Malay Shrines (kramats). The shrines commemorate Syed Abdul Rahman, Nenek Ghalib (his mother) and Puteri Fatimah (his sister) who lived in the 19th century. Many people pray at the Kramat for health, children and other blessings.

On the ninth month (generally in September or October) of the lunar calendar, Kusu becomes filled with worshippers praying at both the temple and the Kramats. There is a food court area on Kusu but it is only open during the ninth lunar month.

There is another set of islands not far from St. John’s. Big Sister and Little Sister Islands are separated by a channel. You have to rent a charter boat to visit them. We were told that the islands have aggressive monkeys so belongings need to be well secured. There are reefs so some go to snorkel. We did not go to Sisters’ Island.

Renting Private Charters for the Trip

You can see the island by private charter. The cost starts at $200 and increases based on the number of people. If you go this route, you can include Sisters’ Island on your itinerary.

How to get there?

Getting to the St. John’s, Kusu or Lazarus island is very easy. Take the MRT to Marina South Pier on the North-South (red) line. Go out via Exit A and the terminal is a few minute walk. You will see the counter for Singapore Island Cruise. Tickets cost $18 for adults and $12 for children round trip.

Check the schedule online before your trip. Singapore Island Cruise is on time, clean and the staff are very helpful.

1. No food or drinks are sold on the islands. There aren’t any vending machines. Bring a blanket, a picnic basket or a cooler packed with food, snacks and drinks. All of the islands have a no littering policy.

2. There are bathrooms with shower facilities scattered around the islands, some (like Kusu) are within walking distance to the beach area.

3. On Kusu Island, there are also huts with benches where you can store your things, and plenty of picnic tables. There are trash receptacles.

4. Avoid going to the islands during the school breaks (when locals visit) and the pilgrimage of the Kusu devotees (check the lunar calendar for the 9th month—generally September or October).

5. While there are daily ferries to the islands, there are more departures on the weekends. The schedule generally has 2 hours between ferries. The ferries go in 1 direction–first to St. John’s, then to Kusu, then back to Singapore. Make you to have the ferry time tables with you as you do not want to be stranded on the island after missing the last ferry.

6. We found the beaches on Lazarus Islands quieter. It is more rustic which meant fewer structures for shade and bathrooms are not as convenient. However, this means the beaches are more secluded, the waters and sand cleaner.

7. Lazarus Island has monkeys. Make sure to secure your belongings while you are swimming, especially food and drinks. If you are not careful, the monkey will abscond up into the trees with your stash.

8. The ferries can get crowded so arrive 15-20 minutes early to get on and get a seat.

Have you been to St. John’s, Kusu or Lazarus Island? Have a secret island that you love? We’d like to hear from you. 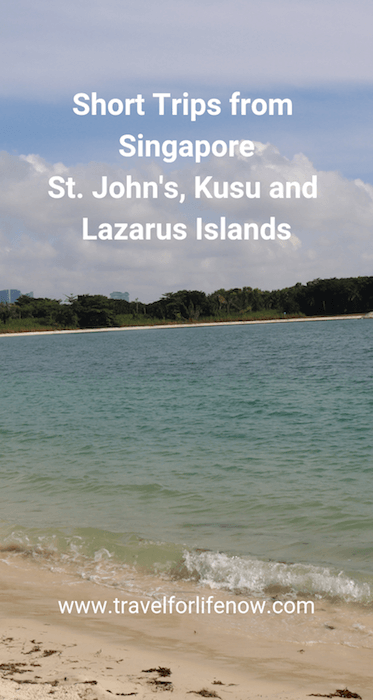 FOLLOW US ON INSTAGRAM
186 shares
We use cookies to ensure that we give you the best experience on our website. If you continue to use this site we will assume that you are happy with it.OkRead more