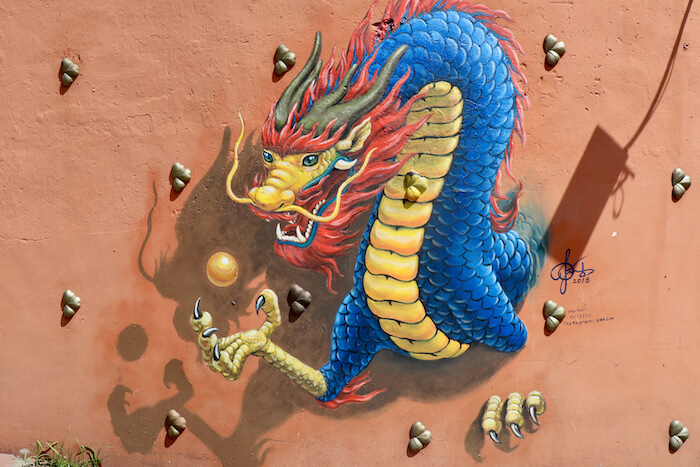 We have seen Asian street art in Cambodia, Vietnam, Singapore and Malaysia. The Street Art of Penang is considered some of the best. In Malaysia, many travelers focus on the iconic Georgetown murals and there is some very interesting Penang street art there. But, there is much more than that to see.

This article may contain affiliate links. This means that if you make a purchase after clicking on the link, we may receive a small commission. There is no additional cost to you.

We see street art as a living and breathing art form that undergoes constant change. Murals are painted, then changed, painted over and a new creation emerges. It creates a city as an evolving canvas. Street art democratizes art by taking it out of the museums and art galleries as well as by re-defining who can do art. There is a dialogue taking place on the walls and in the community.

In our street art hunting, we seek out street art that incorporates local culture and sentiments. Many international artists are invited to do street art in Penang and elsewhere. They do wonderful pieces and we love to see them. At the same time, we make a special effort to locate and showcase the work of local and women street artists so we can hear what they are saying.

For all of these reasons. we were interested in seeing Penang Murals in Georgetown and in exploring the rest of the city and Butterworth. Here is some of the best street art of Penang from Georgetown to the Hin Bus Depot to Butterworth Street Art Walk.

The easiest way to see Penang wall murals is in Georgetown. And, you can’t walk down the street without seeing some of the work of Ernest Zacharevic, a Lithuanian street artist, now based in Penang. His murals show life in Penang and often have sculptural elements as well. For instance, Boy on a Motorcycle has a motorcycle. Zacharevic was instrumental in bring street art to Singapore, one of the more restrictive places in Asia to do street art. 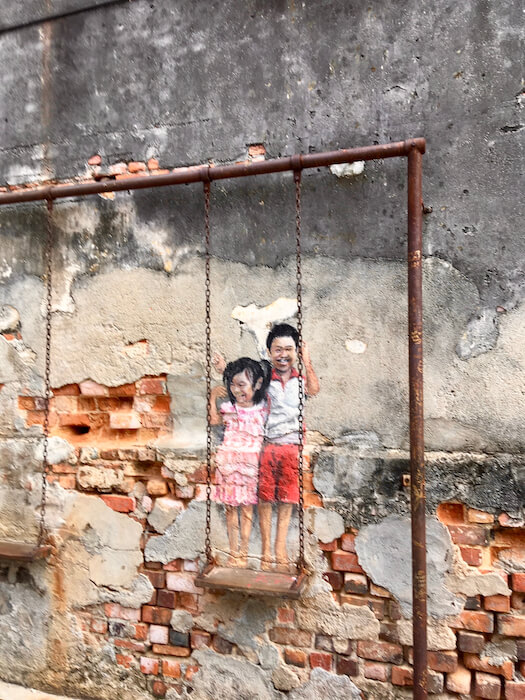 Kids on a Swing by Ernest Zacharevic 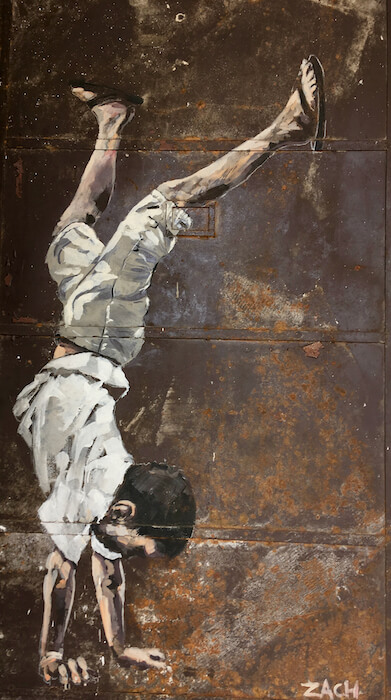 Boy Mural by Ernest Zacheravic at the Hin Bus Depot 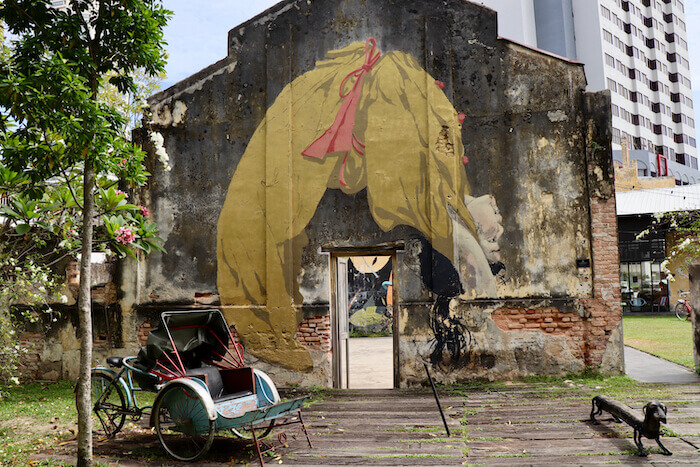 Mural by Ernest Zacheravic at the Hin Bus Depot

Russian Julia Volchkova is another well-known artist in Penang. We found her murals to be very expressive, though some people in the Penang art community expressed concerns to us about her depiction of the poverty in Penang. The first mural below shows an 87-year-old grandmother with her two-year-old grandchild. The child’s father had a stroke and was unable to work. While we were looking at the mural, one of their neighbors told us that the grandmother had recently died. She appreciated having the mural in the community. 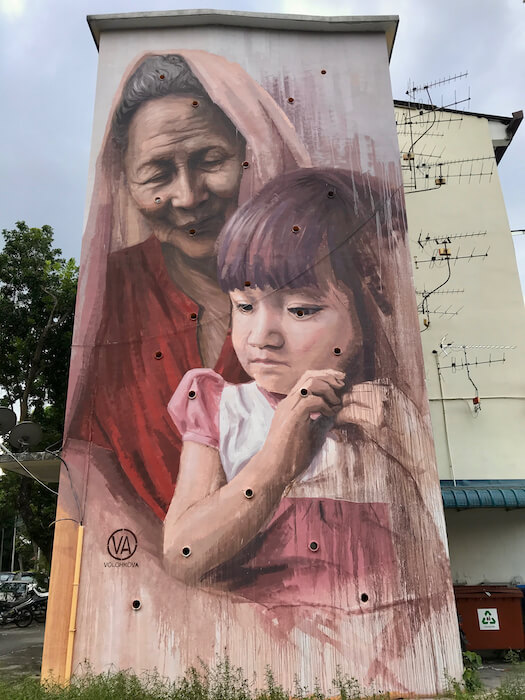 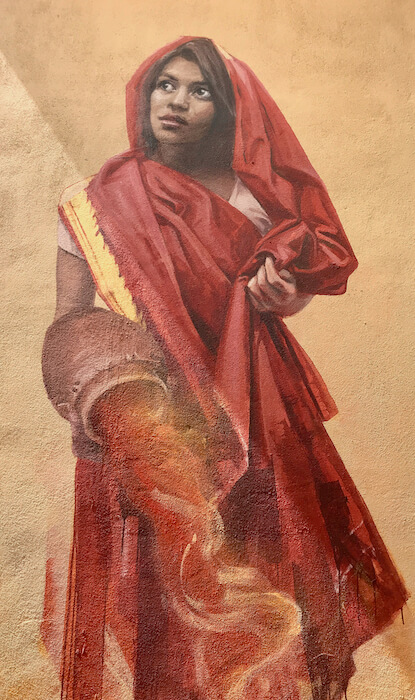 Mural at the Spices Hotel by Julia Volchkova 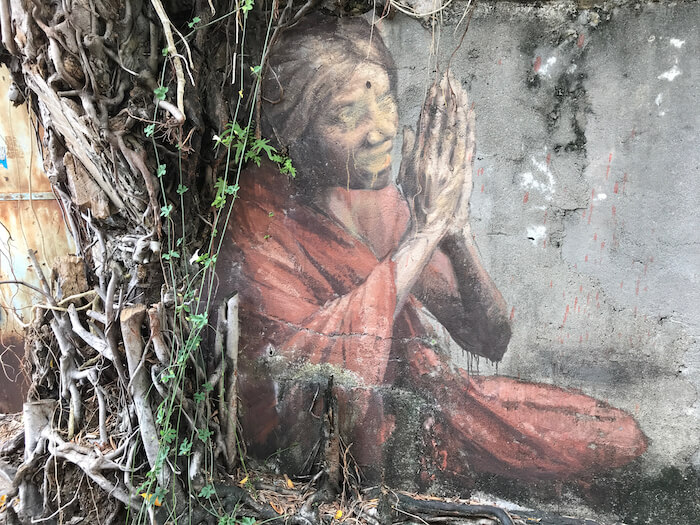 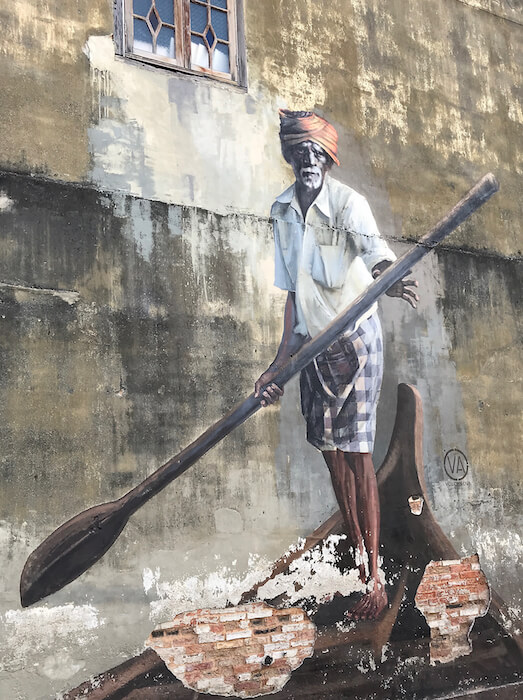 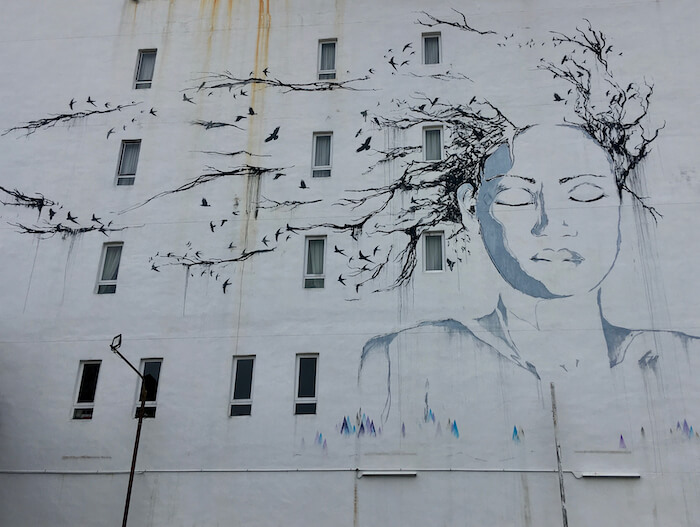 Vexta is an Australian female street artist now living in Brooklyn, NY. She does fine art and stencils. In 2008, she did a show alongside the British Street artist Bansky. She has painted all over the world, including Paris, Sydney, Mexico City, Bogota, San Francisco and New York. 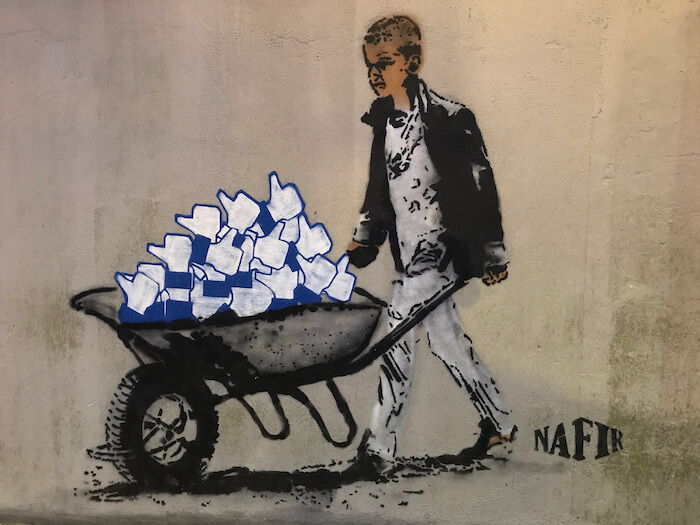 I was struck by the mural in Nagore Square by Nafir, an Iranian Street Artist. He lives in Tehran and paints extensively there. He focused on political issues. His works are usually painted over by the police within 24 hours. His identity in Tehran is secret because it is very dangerous to do street art in Tehran. 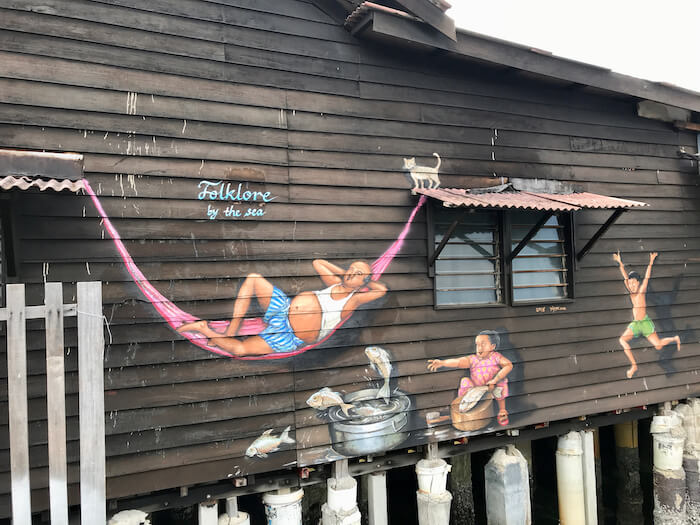 YC Yip is a Singaporean street artist. You can see a lot of his work in Singapore. He generally paints scenes that depict Singapore of the past. And, he always has a cat in his murals. He was inspired to start painting murals by Ernest Zacharevic’s work in Singapore.

The Dragon by Zen Lim on Carnarvon Street

Only you can stop Air Pollution by Malaysian Street Artist Cloakwork on Ah Quee Street near the Boys with the Bicycle mural.

CloakWork is based in Kuala Lumpur.  He often has political messages in his art. He often uses cartoon elements in his murals. CloakWork thinks, and I agree, that local artists need to be showcased in Penang. 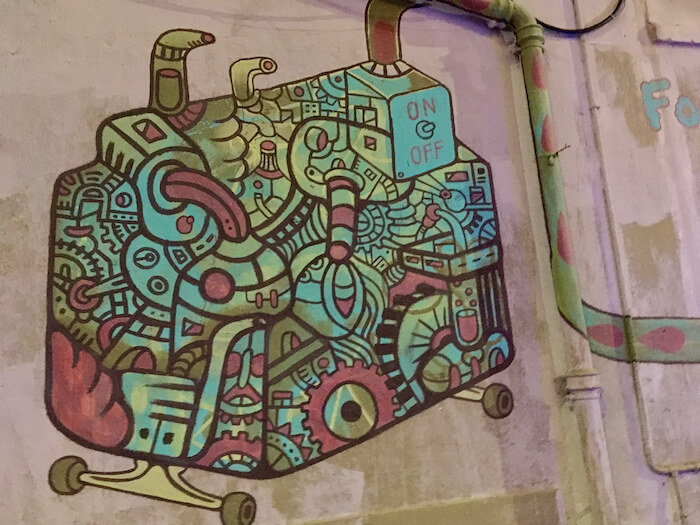 Fauzan Faud is also based in Kuala Lumpur. He has been painting for about 10 years (started doing it fulltime in 2014) and works with a group called 4Some. Faud is an anarchist and skateboarder. He has a series of skateboards that he has painted.

Visiting the Hin Bus Depot is one of the must-do things in Penang if you are interested in art and street art. There are art galleries and street art all over the place. In addition to Zacharevic, they feature local and emerging artists. We also had a chance to see the collectors show while we were there. 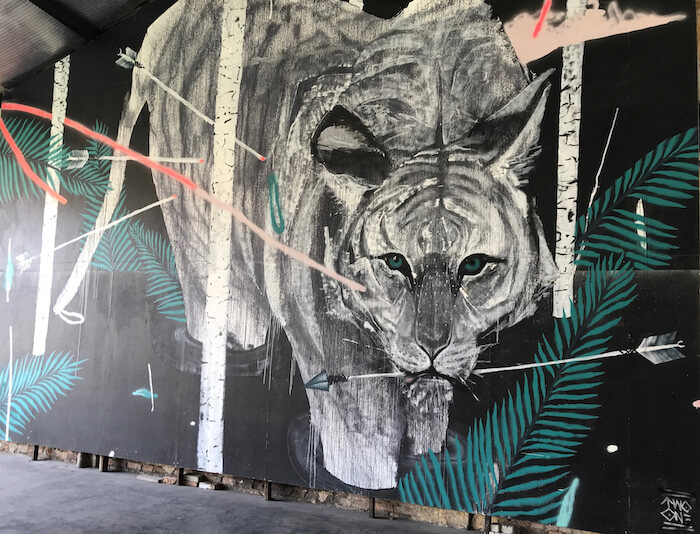 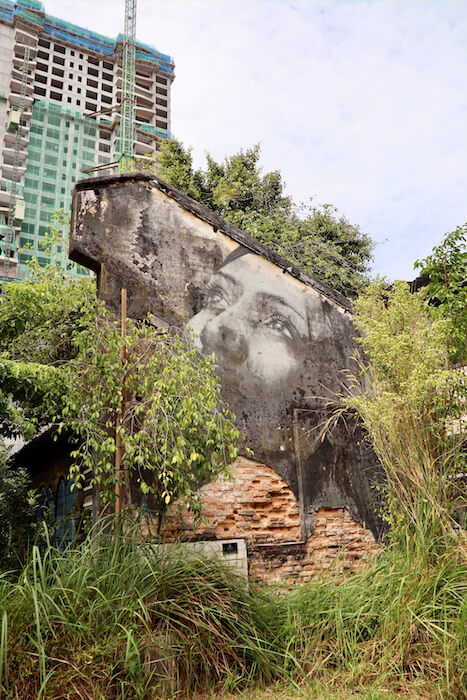 Mural at the Hin Bus Depot by Rone

Mural at the In Bus Depot by Dr. Caryn Koh 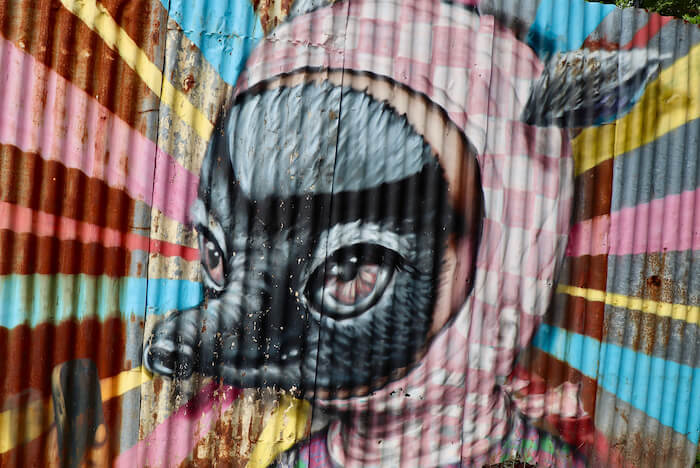 Mural at the In Bus Depot by Dr. Caryn Koh

The Malayan Tiger by Hiroyasu Tsuri (TwoOne) is a stunning mural. He was born in Yokohana Japan, moved to Melbourne and now lives in Berlin. For his nfirst solo show, he painted 1,000 spray cans. In addition to street art, he does sculptures and installations. He just had a show in Brussels.

Caryn Koh gave up a career in medicine to become an artist. SHe is based in Kuala Lumpur and is part of a collective called Titikmerah. Her work explores the makeup of people. She does large scale murals, installations, audio and video-based art.

We have seen AlexFace’s work in Singapore, Phnom Penh and Penang. His work is playful in these places, but he and Muebon are top street artists in Thailand. They use their art to respond to the political situation and as a way to draw attention to the problems int eh country.

Melbourne Street artists Rone is most known for painting women’s faces. He likes to explore the relationship between beauty and decay. Street art is a prime place to explore that as murals fade from the elements. He has painted murals all over the world and has had his are shown in museums and galleries.

We heard about Butterworth Street Art walk and decided to spend an afternoon on an adventure. Butterworth is on the mainland side of Penang. Butterworth is several streets that are completely covered in street art. It was well worth the trip.

The easiest way to get there is to take a GRAB ($6.25USD or RM26 from Chulia Street. Use the address 1 Lorong Bagan Luar Satu or Lodge 18 Hotel). There is a ferry that goes to Butterworth, but it is about a mile walk from the Street Art area. There is a very good seafood restaurant there called Din Ikan Bakar at 6735 Jalan Butterworth. It was closed when we were there but is supposed to be one of the best in the area. It is closed on Thursdays and Fridays. 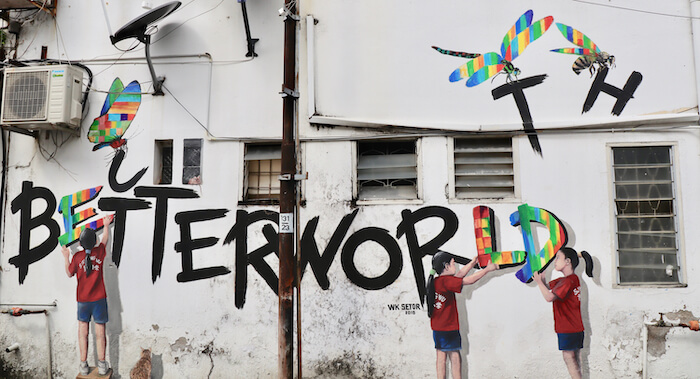 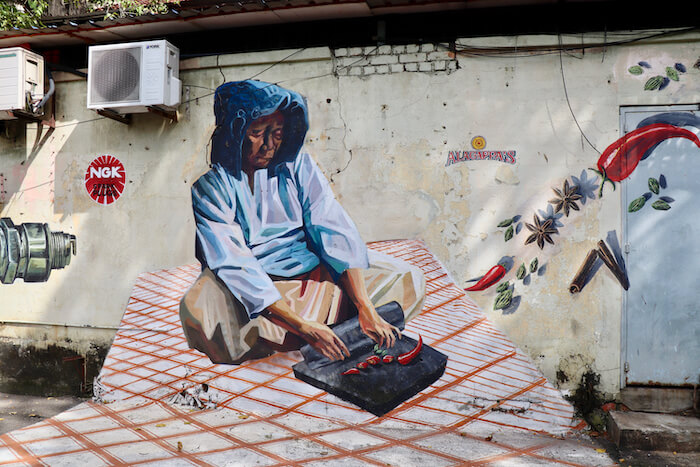 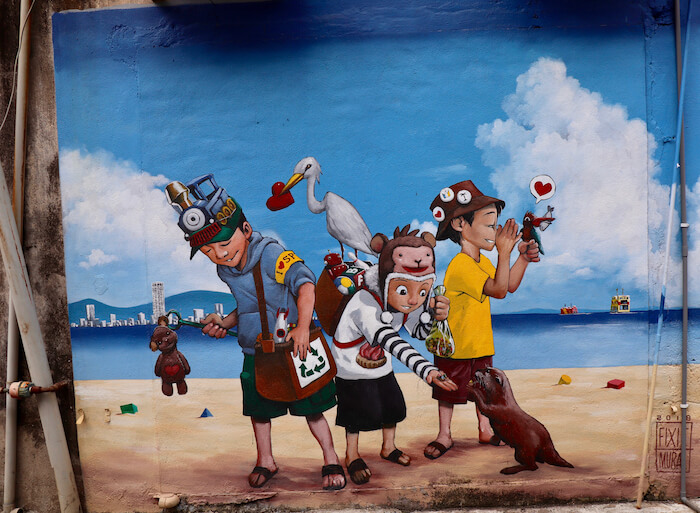 Which Street Mural do you find the Most Interesting? 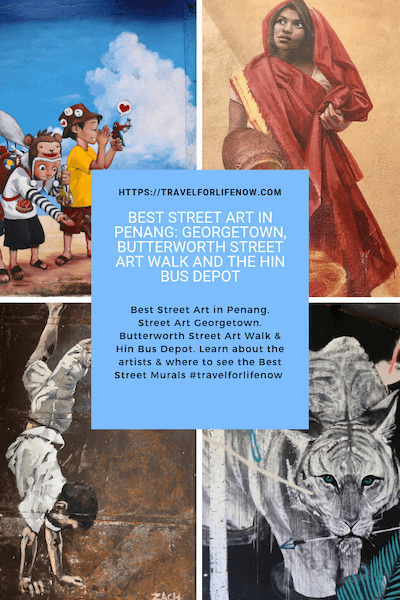 FOLLOW US ON INSTAGRAM
64 shares
We use cookies to ensure that we give you the best experience on our website. If you continue to use this site we will assume that you are happy with it.OkRead more