How To Go To World Pride Stonewall 50th Anniversary 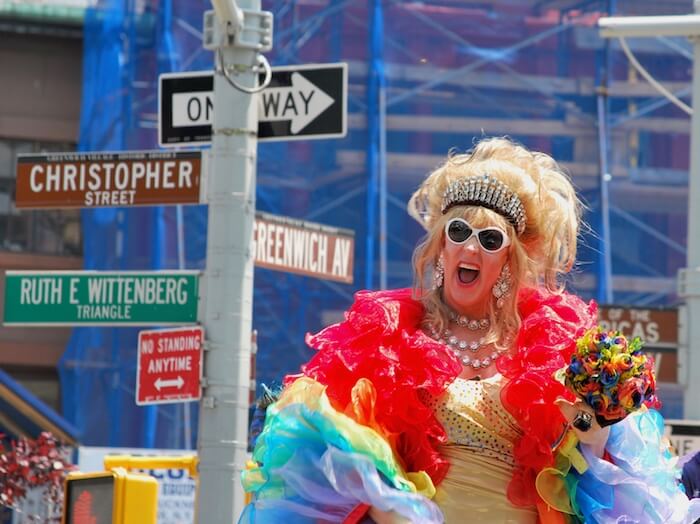 Doris Dear at the New York City Gay Pride Parade. You can learn more about her here.

At the end of June, New York City is hosting World Pride for the first time. It will be the Stonewall 50th Anniversary. And, the 27th anniversary of the NYC Dyke March. More than 2 million people attended Gay Pride in 2018 and you can expect that millions more will arrive in 2019. If you want to come and don’t already live in the NYC metropolitan area, you’ll need to plan your day well.

This article may contain affiliate links. This means that if you make a purchase after clicking on the link, we may receive a small commission.

I’ve been going to Gay Pride in New York City for nearly 40 years. What was once a march and political event is now a huge parade. Reggie has been going since 1993. For many years, we lived along the parade route in the Village.

Much has been won and lost in the past nearly 40 years–the thousands of lives lost to the AIDs epidemic to Matthew Shepard’s murder and the continual issue of anti-gay violence to gay marriage to Black Lives Matter and transgender awareness. I like to have all of this history with me during Gay Pride. And, to remember Marcia Johnson, Sylvia Rivera and the poor and working class Black and Latino Drag Queens that led the way and that continue to inspire that creation of a better world for everyone.

There are events happening all month in NYC. The listed below are some of the (mostly) free events taking place from Wednesday to Sunday of Gay Pride. The first World Pride was in 2000.

Friday, June 28th: 50th Commemoration of Stonewall on Friday evening from 6-9 pm at Christopher & Waverly across the Street from the Stonewall Inn.

Saturday, June 29th Youth Pride (free but must register in advance and be under 21 years old) at Central Park Summer Stage (5th Avenue at 69th)

Sunday, June 30th: Pride March Steps off is at noon at 26th and 5th Avenue. Goes down 5th Avenue to the Village to 8th Street and past Stonewall then past Stonewall and then up to 23rd & 7th Ave. Here’s a map of the route.

The 1960s were a time of serious attacks on the gay community and particularly those people who were most out and nonconforming. Drag queens, butch lesbians, African American and Latino gay/lesbian people and other people of color were most marginalized. Homosexuality was illegal and wearing less than three pieces of “gender appropriate” clothing could get one arrested. Gay people were deemed to be disorderly just by being out and a bar could refuse to serve liquor to anyone gay. Bars were frequently raided. Harassment and entrapment by the police was common. 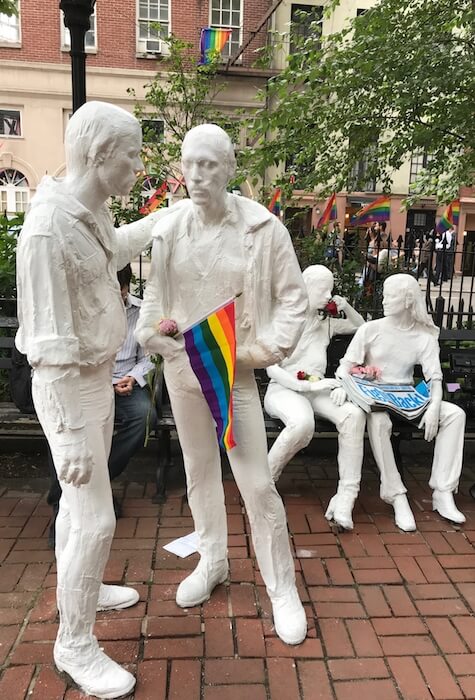 Stonewall 50th Anniversary & World Pride. The Gay Liberation Monument across from the Stonewall Inn. Many people have criticized this monument for the lack of inclusion of people of color. It is “white” in more than one way.

The Stonewall Inn was owned by the mafia as were most gay bars in the Village. On June 28, 1969, the police raided the Stonewall Inn. Usually, the bar was tipped off about a raid but this time they were not. The raid sparked a week of riots and is considered to be the beginning of the gay rights movement in the US. In actuality, the Mattachine Society (primarily but not exclusively gay men) was founded in 1950 and the Daughters of Bilitis (the first lesbian organization in the US) was founded in 1955. Stonewall did lead to a more militant LGBT movement, the Gay Liberation Front and eventually ACT Up and other groups of the 1970s and 1980s.

World Pride will take place in NYC in 2019 in recognition of the Stonewall 50th Anniversary. It will also be the 25th Anniversary of the Dyke March in NYC.  In 2018, Gay Pride in NYC drew more than 2 million people. The 2019 events will be much, much larger.

Here are some tips for making your trip to World Pride and the Stonewall 50th a success. There are activities all month leading up to Gay Pride Day (generally the last Sunday of the month). On Gay Pride Day, the parade starts at noon and arrives in the heart of the village around 12:45 and lasts for many hours. The parade kicks off with Dykes on Bikes (motorcycles) followed by the Grand Marshalls. Parties begin in the afternoon and extend into the evening. There are fireworks usually around 10 pm.

1. Remember How this all Began–Stonewall 50th Anniversary

The leaders of the Stonewall rebellion were the most marginalized within the gay community–Black and Latino, poor, drag queens and butch lesbians. Unfortunately, those voices were largely silenced as the movement became more mainstream. We need to remember those leaders who were on the front lines from the beginning.

Visit Stonewall (53 Christopher Street) and the Gay Liberation Monument in the park across the Street. Stonewall has now been designated a national historic landmark. George Segal cast the Gay Liberation statues and they are not inclusive of the people of color that put their lives on the line in the beginning and that are still marginalized.

Stop by the Aids Memorial (12th Street and 7th Avenue). More than 100,000 men, women and children died from AIDS in NYC. 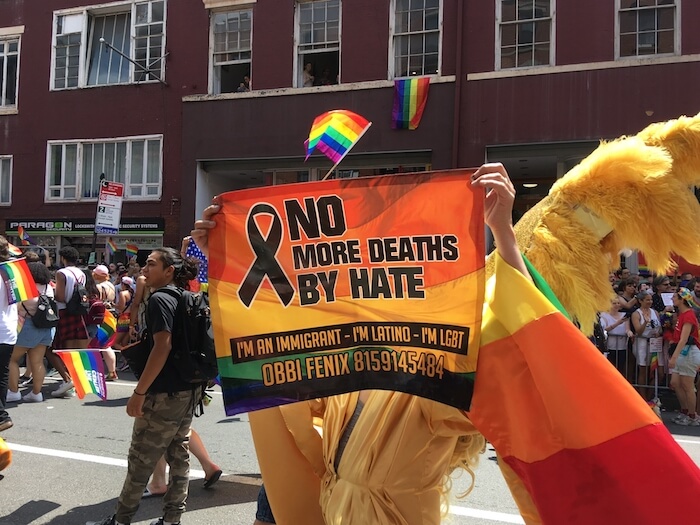 Go to the Christopher Street Piers where the street ends at the Hudson River. The Piers were a gathering and cruising place for gay men, drag queens and young people in the 1970s, 1980s and early 1990s. In those days, you would have met Marsha Johnson, a well-known drag queen and the  “Mayor of Christopher Street,” and hundreds of drag queens, gay and lesbian youth (many homeless) and gay men.

Marsha was on the front lines of the Stonewall rebellion and a founder of the Gay Liberation Front. With her good friend Sylvia Rivera, she founded S.T.A.R (Street Transvestite Action Revolutionaries). Marcia was killed at the Piers in 1992. This was long before the High Line and parks were built. It was an important era of gay history in NYC.

Most people recommend that you try to find a hotel near the parade route. This is going to be very difficult in 2019 unless you book very early. Many people save money by staying in Brooklyn, Queens or the Bronx. Add Jersey City to that list. Jersey City is closer to the Village than some of these areas. There are hotels and Airbnbs right near the PATH stations (the subway into NYC) and it is a short 5-10 minute ride into the Village. The PATH has stops on Christopher, 9th and 14th Streets right near the Parade route.

While you are in Jersey City, go see some fantastic street art.

Traffic in and out of the City is going to be jammed. Parking will be very difficult and expensive. Take mass transit.

4. Make a reservation at a restaurant on the route

If you are not staying in a hotel on the parade route, then book a table at a restaurant on the Parade route. I recommend Rasa (25 West 8th Street). You can arrive around 11:30 and have drinks/lunch while you wait for the parade. Then, you can go outside to watch or stay inside and view through the windows. There are many other restaurants that have views of the Parade.

5. Come to the Parade Early 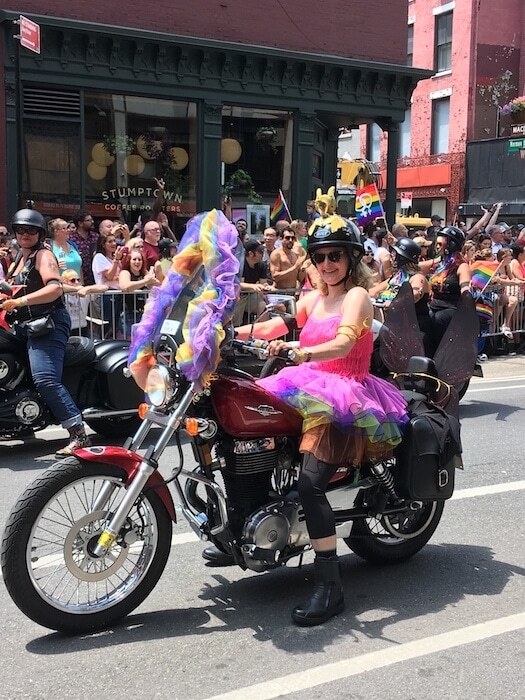 In order to get a front row place to stand, you’ll need to arrive early. I recommend arriving around 10:30 for the most popular areas and 11:15 for some of the places. Go to the Pride Festival (starts at 11 am) before it gets too crowded. After that, find your way to a good spot on the route to watch the Parade.

The Parade goes on for hours and you will be standing and walking a lot. You’ll want to wear comfortable shoes. And, New York is hot at the end of June (85+ degrees Fahrenheit or 29+ Celsius). Water and sunscreen are critical.

7. Crowds and Detours will be Everywhere

Security is very tight during Gay Pride. You’ll see hundreds of police officers and lots of barriers and detours. You will likely have to walk many blocks out of your way in order to get anywhere. You can cross the avenues only on designated streets. There will be crowds everywhere. Be patient. It will take you a long time to get anywhere.

Buying water and drinks on the street will require cash. Make sure that you have some on you.

9. You don’t have to spend a lot of money

All of the Village, Chelsea, Hell Kitchen and other areas are full of parties. The official parties cost a lot to get into. They are exciting. But, you don’t need to go to them in order to have fun.

10. Bathrooms are Hard to Find

Bathrooms are a challenge. If you booked a table at a restaurant, you’ll have this covered. There are portapotties. Many restaurants will require you to purchase something in order to use the facilities. There will likely be long lines everywhere. This is one of the reasons that people book a hotel room near the route.

Being in the hot sun, drinking alcohol, cheering and standing in the heat is exhausting. If you want to last into the evening, you will need to pace yourself. Drink plenty of water (in between whatever else you are drinking), make sure to eat and get some shade.

Next Year will be the 27th Annual NYC Dyke March. It is a March, not a celebration and welcomes people of many different gender identities. What you won’t see at the NYC Dyke March is all the corporate sponsors that make up a huge part of Sunday’s Parade. The NYC Dyke March starts at Bryant Park at 5 pm on June 29th and draws thousands of women.

13. Check out Some of the Other Events Throughout the Weekend and Month 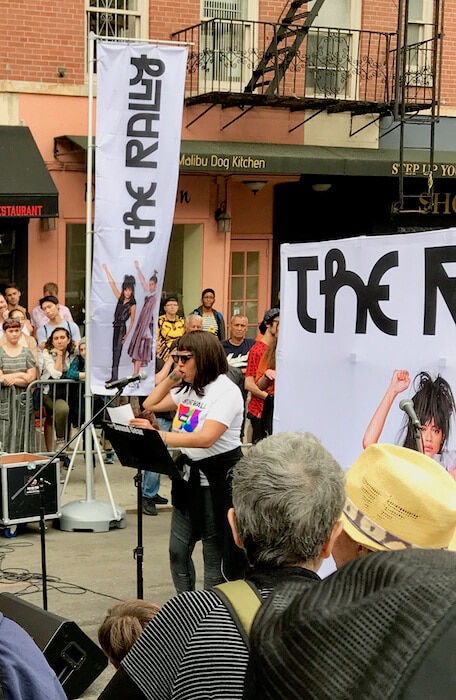 There are many other events throughout the month. There is something for everyone. The weekend kicks off with a rally near Stonewall with speakers and entertainment. The NYC Dyke March is on Saturday and there other events and parties throughout Sunday.

In New York, you cannot just show up on Sunday and march in the parade. You need to register and affiliate with a group that is marching.

15. Check out the rest of the City

You will be tired after the NYC Dyke March, World Pride and the Stonewall 50th Anniversary. But why come all the way to NYC without seeing the rest of the city. Stay a few more days and explore.

If you decide to stay, here is a listing of Free Things to do in NYC

Did you find this helpful? Are you Coming to Stonewall 50th? Have Additional Tips? We’d Love to Hear from You. 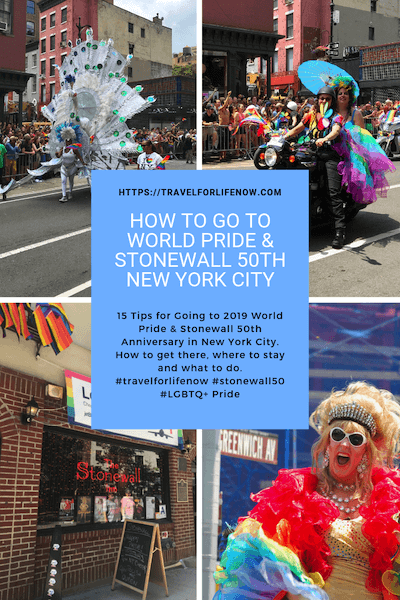 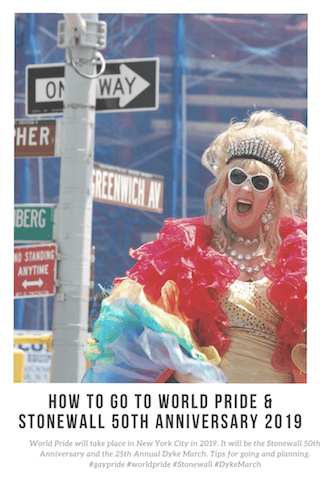 FOLLOW US ON INSTAGRAM
223 shares
We use cookies to ensure that we give you the best experience on our website. If you continue to use this site we will assume that you are happy with it.OkRead more