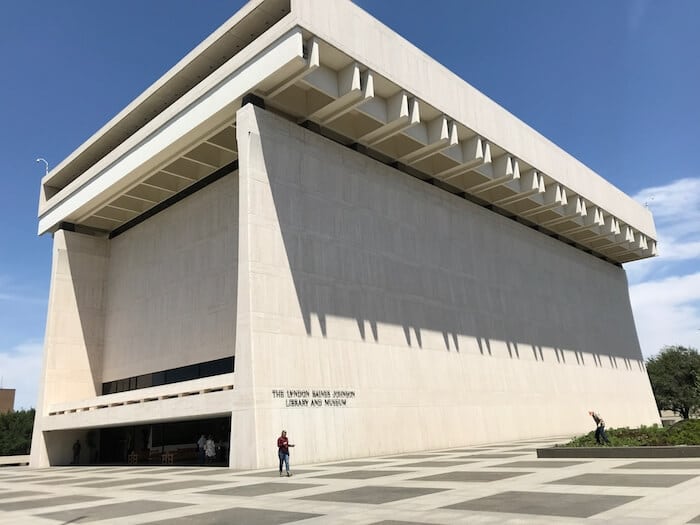 I have always been interested in visiting a presidential library. While I was in Austin, Texas, I went to the LBJ Presidential Library. I was very familiar with President Johnson and thought I’d spend an hour wandering around the LBJ Presidential Library. I expected it to be a dry depiction of all of LBJ’s accomplishments. Boy, did I underestimate how interesting it would be and much time I would want to spend at the library. I could have easily spent most of the day.

LBJ is known for taking office after President John F. Kennedy was assassinated and massively increasing US involvement in the Vietnam War. During his presidency, the number of young men fighting in Vietnam increased to more than 500,000 and the Vietnam protest movement grew very large and loud. It became his lasting failure.

There is much more, however, to the Johnson Presidency. At the time of the assassination, most of Kennedy’s legislative initiatives had been stalled in congress, including the Civil Rights Act. The grassroots movement and the leadership of Rev. Dr. Martin Luther King, Jr. put immense pressure on LBJ to get the Civil Right Act passed. The Civil Rights Act was passed in 1964 and the Voting Rights Act in 1965 whileJohnson was President.

LBJ declared “the War on Poverty,” which has never been won and remains a pressing issue to this day. He initiated a significant amount of legislation to this end: Medicare, Medicaid, Head Start and VISTA. In addition, the National Endowment for the Arts (NEA), National Endowment for the Humanities (NEH) and the Public Broadcasting Service (PBS) were all established during his tenure. LBJ also supported gun control legislation (unusual for a southern Democrat). Finally, he had a hand in immigration reform and abolished the immigration quota that were set in the 1920s.

LBJ had been a very powerful US senator prior to being Kennedy’s running mate. Here’s a photo of a piece of campaign literature that I’ve had for many years. It was paid for by the Alabama Democratic Party for the Kennedy-Johnson Ticket.

Campaign literature from 1960 presidential election from the Alabama Democratic Party

Campaign literature from 1960 presidential election from the Alabama Democratic Party

At the time of the 1960 election, Senator Johnson was the Senate Majority leader and had finished second in the primaries. JFK-LBJ narrowly defeated the Republican ticket headed by Richard Nixon with Henry Cabot Lodge for Vice President. 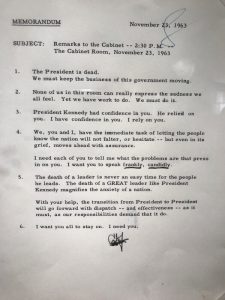 LBJ memo to the Cabinet the day after John F. Kennedy was assassinated

At the time of the assassination, most of Kennedy’s legislative initiatives had been stalled in congress, including the Civil Rights Act.

The Library presents the passage of the Civil Rights Act as a result of LBJ leveraging  the impact of the Kennedy assassination and his own relationships. In my opinion, this presentation underestimates the full impact of Dr. King and the Civil Rights movement. It also leaves out some of LBJ’s views on civil rights. Earlier in his career as a US Senator from Texas, he was well-known for espousing racist views and opposing anti-lynching and civil rights bills.

LBJ secretly recorded many of his phone conversations (he’s not the only President to do so) and those recordings were my favorite part of the LBJ Presidential Library. There are recording of conversations with Jaqueline Kennedy, Dr. King, Hubert Humphrey, Gerald Ford, Dwight Eisenhower, J. Edgar Hoover, Richard Nixon and many others.

In the conversations that I listened to, LBJ generally did 90% of the talking. The calls varied greatly. I listened to a recording of a call to Jackie Kennedy right after the JFK assassination. Then, another one to Congressman Adam Clayton Powell berating him for holding out his support for LBJ’s legislation. Another call with Martin Luther King Jr. discussing civil right legislation and inviting Dr. King for a visit next time he was in town. Later, in a 1964 conversation, Dr. King congratulates LBJ on his election and LBJ asks Dr. King for his help to work on poverty and helping young people.

One the calls that most struck me was a call the LBJ did to Gerald Ford, asking him to serve on the so-to-be-named Warren commission investigating the assassination of JFK. In it, Johnson says:

“Gerald, I got something I want you to do for me…I’ve got to have a top blue ribbon presidential commission to investigate the assassination…I want it nonpartisan…where you forget what party you belong to and just serve as an American…”

This was a different era in US politics where the partisan divide was not as strong or vitriolic as it is today. I like the phrasing “forget what party you belong to.” We could use more of that in this hyper-partisan time. 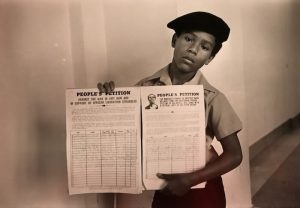 Photo of Black Panther People’s Petition from the Stephen Shames Photographic Archive shown at the Struggle for Justice Exhibition at the Briscoe Center at the University of Texas at Austin.

It is not that there was no partisanship in the 1960s and that everything was fine. Jim Crow laws and segregation, lynching, violence against African Americans and poverty were ever-present. The Vietnam war was a disaster. Many Southern Democrats opposed the Civil Rights legislation and an end to segregation. The country was very divided—the civil rights, anti-war, feminist and gay rights movements had started or were about to emerge.

In fact, right across the courtyard, there was an exhibit at the Briscoe Center called the Struggle for Justice Exhibition: Four Decades of Civil Rights Photography. This photo of the Black Panther’s Peoples Petition is from that exhibition.

In the legislative process, however, it was more possible to work across the aisles. More could get done. You can see that by looking at the amount of legislation that LBJ signed into law.

President Johnson’s, limousine is one of the first things you see when you walk into the museum. I also enjoyed seeing some of the correspondence between LBJ and Lady Bird Johnson. The replication of the oval office and of Lady Bird’s office and the political cartoons about LBJ were interesting as well. You can also see the teletype machine that was used to communicate with the Soviet Union leadership.

The LBJ Presidential Library is certainly worth a visit and is an important look at a very turbulent time in US history. The opportunity to listen to conversation and read memos and materials was a great experience.

The LBJ Presidential Library is located on the University of Texas Austin Campus. It was a short Uber ride from our hotel, though the driver wasn’t exactly sure what entrance to take. UT at Austin is a huge campus. The library is open every day from 9-5. Admission is $10 for adults, $3 for college students and children.

For More things to do in Austin, read this post on Graffiti Park.

Interested in learning more about US Presidents? Check out Spend an Hour with America’s Presidents at the Smithsonian National Portrait Gallery

Leave a comment. Have you been to the LBJ Presidential Library? A Different on? Planning to go in the Future?

FOLLOW US ON INSTAGRAM
30 shares
We use cookies to ensure that we give you the best experience on our website. If you continue to use this site we will assume that you are happy with it.OkRead more