Lhasa Tibet Travel Photos & History What to Know Before You Go 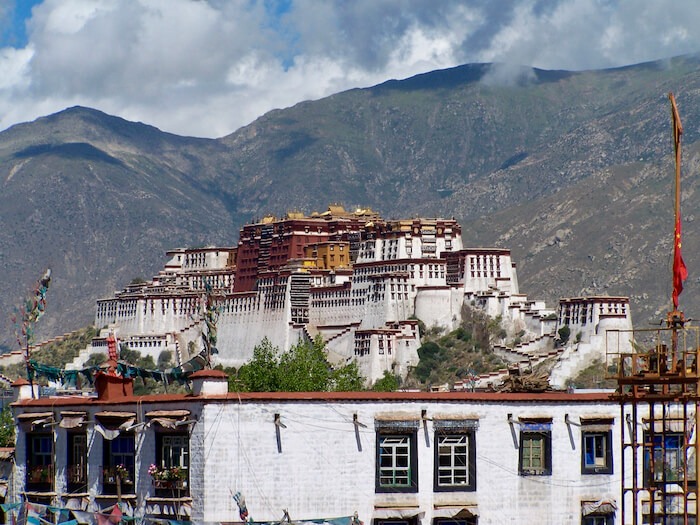 In 2006, Reggie and I visited Tibet. It was an incredible experience to be with the Tibetan people, to experience their deep spirituality and gentleness. See the beautify of the landscape. Experience the hardships and challenges of living 13,000 feet above sea level. Get a sense of the poverty and isolation of the country. Learn about the history of the Tibet and China relationship. Tibet touched our hearts. It left us wishing that we had spent much more time there. And, it filled us with deep sadness for the future of Tibet. We were determined to document as much as we could in our Lhasa Tibet Travel Photos. 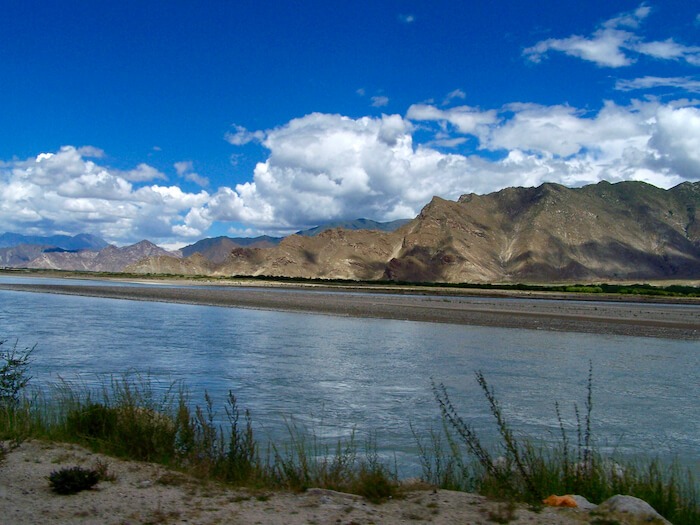 On the Way to Lhasa

Engineering the Impossible: the Qinghai-Tibet Railway

A few weeks before we arrived, the Chinese government opened the Qinghai-Tibet Railway. The railway was the first to connect Tibet to the rest of China. It is an engineering marvel. It goes through the Tanggula Pass at an elevation of 16,640 feet (5,072 m). There is no other train track at that elevation in the world. The railway is 1,215 miles (2000 KM) long with 340 miles of the track laid on permafrost. Building on permafrost is another impossibility. It can be seasonally unstable, shifting as the temperature changes. The train cars had to be built so that all passengers on the train had oxygen supply. Passengers must sign a health registration card beyond boarding the train.  As we said, an amazing accomplishment. 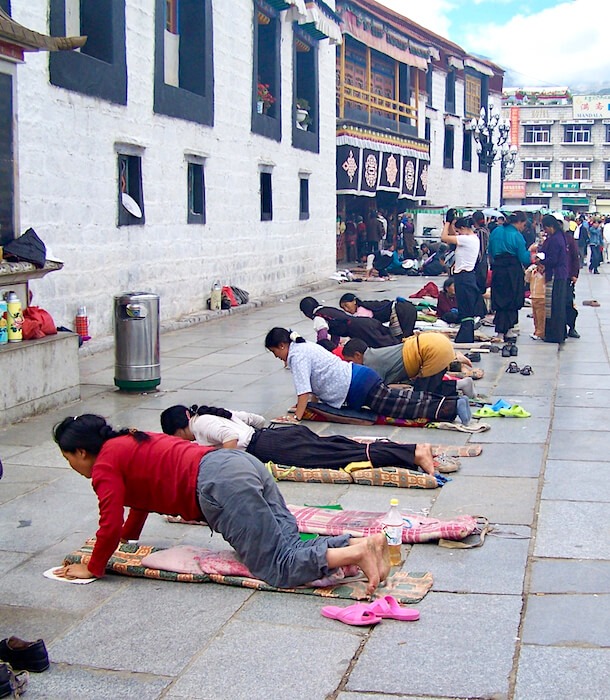 The Railway was about the future of Tibet. We looked upon it with wonder, mixed with deep sadness. It appeared to us that the plan was to move millions of Han Chinese into Tibet, to make the Tibetans a minority in their own country and to cement China’s permanent control over Tibet.

That is, in fact, what has happened.

In 2018, the population of Tibet was estimated to be 6 million Tibetans and 7.5 million Chinese settlers. There are now more Han Chinese in Tibet that Tibetans. That was clearly the plan when the Chinese started building the railway in 2001.

Tibet is strategically located, bordering Myanmar, India, Bhutan, Nepal and Kashmir. The Tibetan Autonomous Region covers approximately 25% of China’s land mass and enables internal migration of the population. China has so many people, that it needs new places for them to live. Tibet is rich in minerals and natural resources, including uranium, lithium and iron. And, the Tibetan plateau and the Himalayas are a water source for hundreds of millions of people. Controlling Tibet makes a difference. 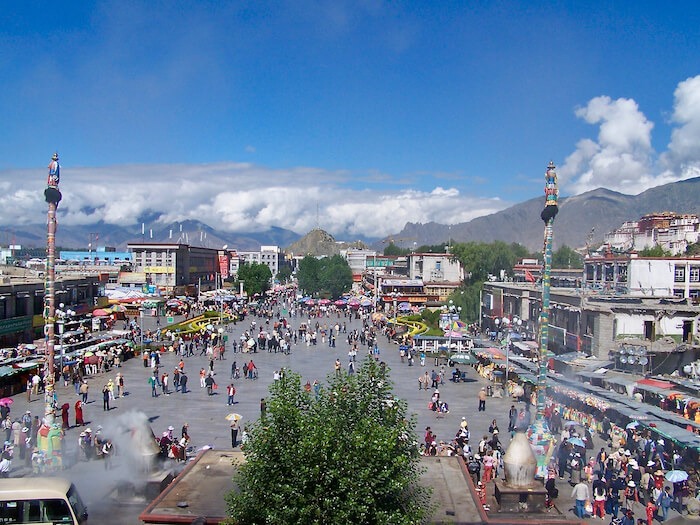 Jokhang Square is the center of Lhasa

When traveling to Tibet, don’t forget the sunscreen. It’s easy to get sunburned at high elevations.

Chinese Invasion of Tibet in 1950

Tibet has a long history of being invaded. Mongols, Manchu, Gurkas and the Chinese have all occupied the country at one point or another. China invaded Tibet in 1950 and has controlled it ever since. China claims that Tibet has always been a part of China. Tibet has been independent for much of its history before 1720. From 1720-1912, the Qing Dynasty ruled Tibet. Tibet was free again from 1912 until the Chinese invasion in 1950.

The Tibetan fought against the invasion, but were grossly overmatch. As Buddhists, violence went against their religious beliefs, but some still picked up arms to defend the country. 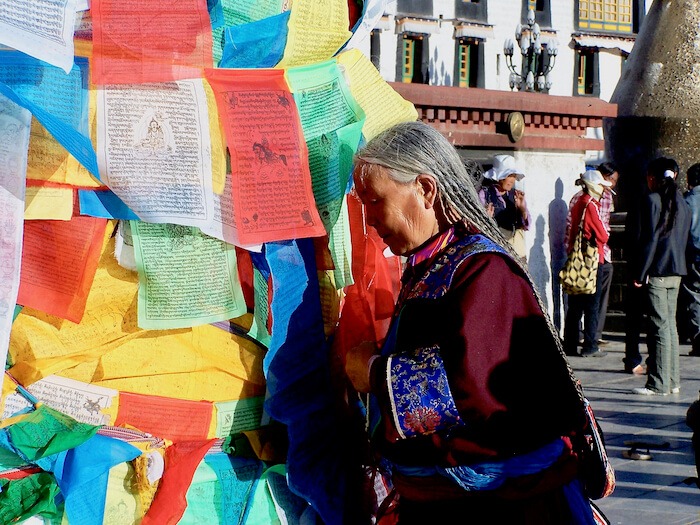 The Dalai Lama went into exile in 1959, 3 months before the Chinese moved in to violently put down the continuous uprising in Tibet. The Chinese destroyed hundreds of monasteries. They forced the farmers to grow different crops which could not be grown in the Tibetan soil, resulting in the starvation of hundreds of thousands of people. It is estimated the 1 million Tibetans were killed.

Tibetan independence was supported by many people and celebrities around the world. The Western world and the United Nations did not intervene to stop the invasion of Tibet. In 1989, the Dalia Lama was awarded the Nobel Peace Prize for his efforts to liberate Tibet through peaceful means. The Tibet Government in Exile continues to be based in Dharamshala, India.

The oldest part of Jokhang Temple was built in 652. Considered to be is the most important Temple in Tibet, Jokhang is a UNESCO World Heritage Site. The Temple was enlarged many times, including by the 5th Dalai Lama in 1610. The image of Jowo Sakyamuni, housed at Jokhang is considered sacred. 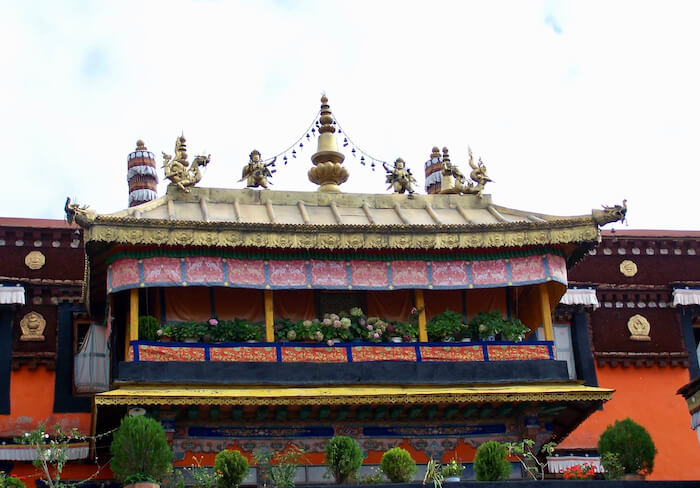 Jokhang Temple is the most sacred temple in Tibet 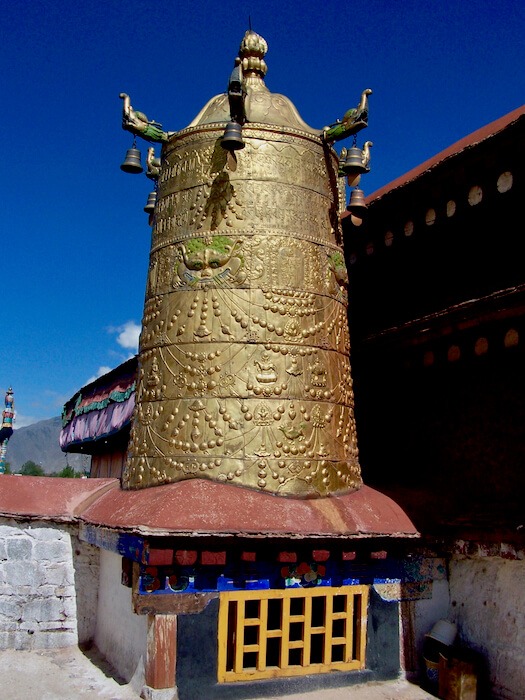 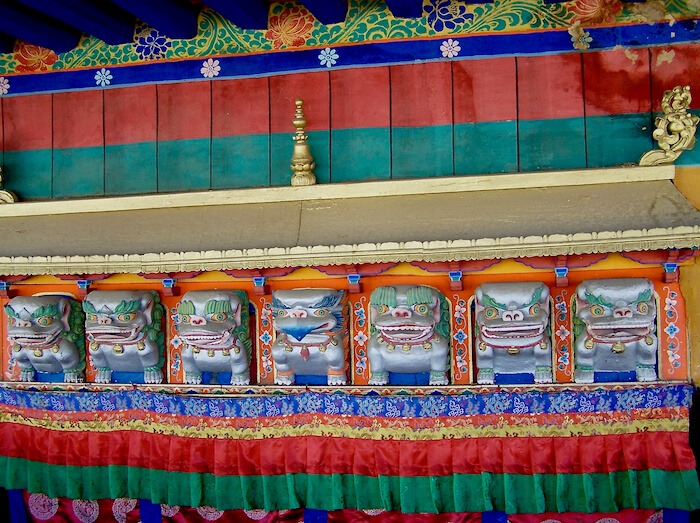 A good had that shields you from the sun is important at high elevations.

Stunningly beautiful, the Potala Palace rises 13 stories high and can be seen from every part of Lhasa. There are 1,000 rooms and 10,0000 shrines in the 1,300 year old Palace. Pilgrims come from all over Tibet to pay their respects, circling the Palace, praying and spinning prayer wheels. The tombs of 8 Dalai Lamas are within the Palace. 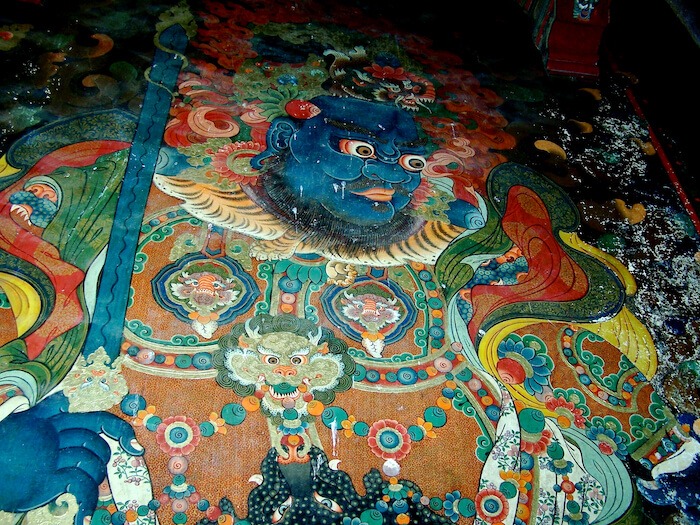 Potala Palace Heavenly Demon Mural, one of nearly 700 in the Palace.

The Potala Palace was built as the center of the Tibetan government by the 5th Dalai Lama in 1645. Potala is divided into the Red and White Palace. The red is the spiritual area white the white is the governing center. There are nearly 700 murals within the Palace that tell the history of Tibet. 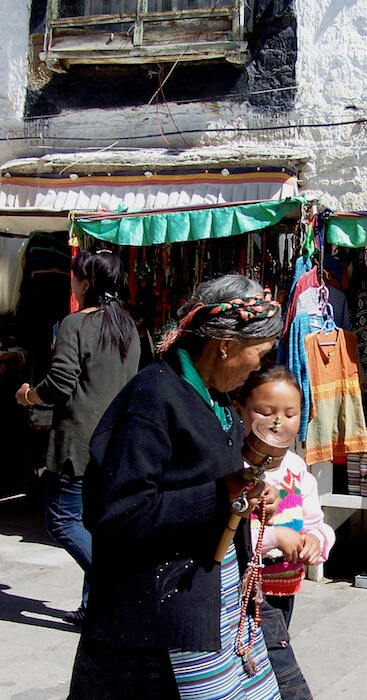 Barkor Street is the heart of Lhasa. Always filled with people, praying, shopping, eating and socializing. We often saw women and men doing the circuit around Jokhang Temple, with prayer wheels and beads. The circuit takes about 20 minutes walking and we saw some people prostrating themselves around the entire walk. The spirituality of Tibet is not just in the Temples, but also on the streets.

Founded in 1419, the Sera Monastery is one of the three most important Buddhist Universities in Tibet. It sustained heavy damage during the 1959 uprising and hundreds of monks were killed. Many of the surviving the monks went to India and establish two Sera Monasteries there. 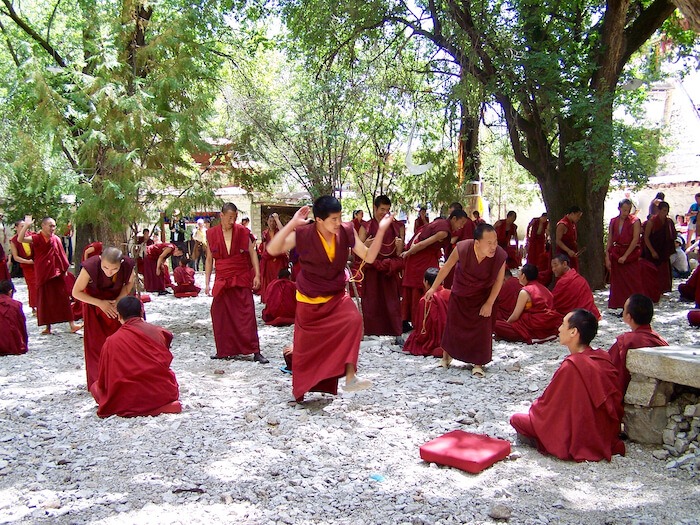 Going to the Sera Monastery was an experience. We arrived in time to see the monks debating. It was electric. The monks smacked their hands and stamped feet when they made a point. It was like poetry in motion. Even though we did not understand anything they were saying, we felt the intensity and belief being conveyed. We were mesmerized and did not want to leave. 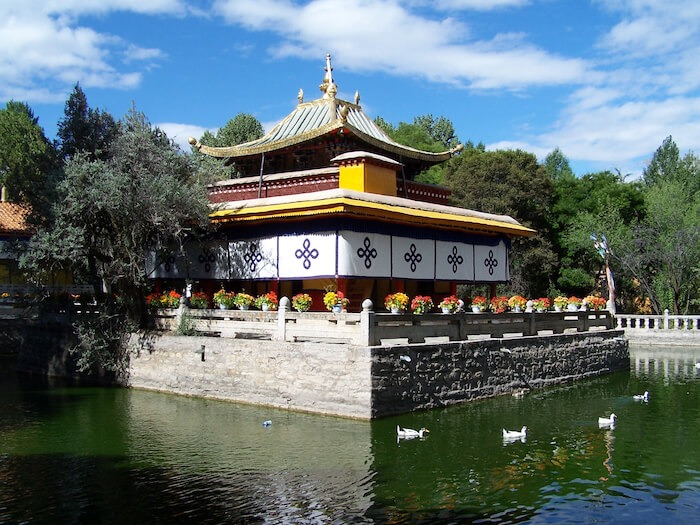 Norbulinka was built in 1755 and served as the summer palace for the Dalia Lamas. It is a World Heritage Site. It is beautiful and tranquil, until you think about the most recent history.

In 1959, thousands of Tibetans surrounded the Summer Palace to protect the Dala Lama. On March 21, 1959, the Chinese bombed the summer palace, killing thousands. The Tibetans are not allowed to speak with tourists about this history. The Dalai Lama, then 23 years old, had already left. Fleeing on foot, disguised as a soldier, he walked over the Himalayas into India with some of his cabinet and soldiers. The journey took 2 weeks.

Student at the School for the Visually Impaired

School for the Visually Impaired

Centre for the Blind was founded in Lhasa by Sabriye Tenberken. She also founded Braille without Borders and created Tibetan Braille. Since Tibetans believe in reincarnation, many people think that blindness is a result of bad karma, that the person did something wrong in a past life. Blind children would often be hidden away at home with no access to schooling. At the Center for the Blind, children learn how to read braille, speak English and other languages and vocations skills so they can make a living. They often return to their home villages, not as pariahs, but become respected members of the community since they are educated and have skills. Some end up working in tourism as they have language abilities. Some do massage, teach or other vocations.

Meeting some of the older students and speaking to them was inspirational. The video on Tibet that we created after the visit has an interview with one of the graduates.

There is an interview with a graduate of Centre for the Blind at the end of this video on Tibet.

You might also be interested in the Temples and Sites in Sri Lanka: Twelve Hundred Steps to the Top of Sigirya.

It was time to leave Tibet and continue on our journey. We felt enormously privileged to have had the experience. and, to be able to share what we had seen and to give back in some small ways to the people of Tibet. 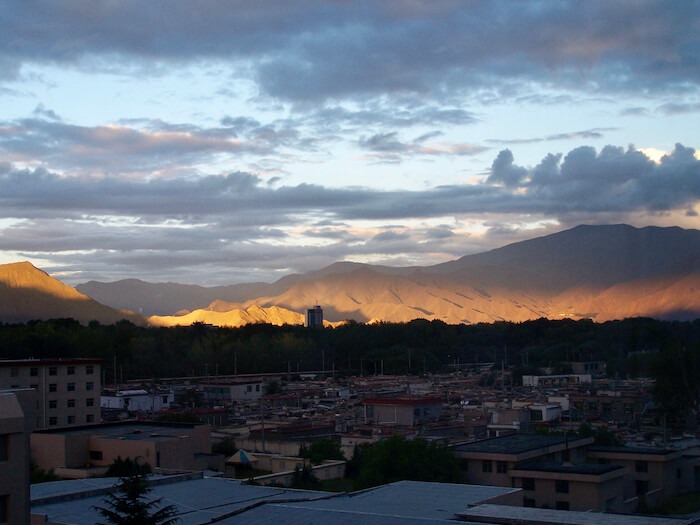 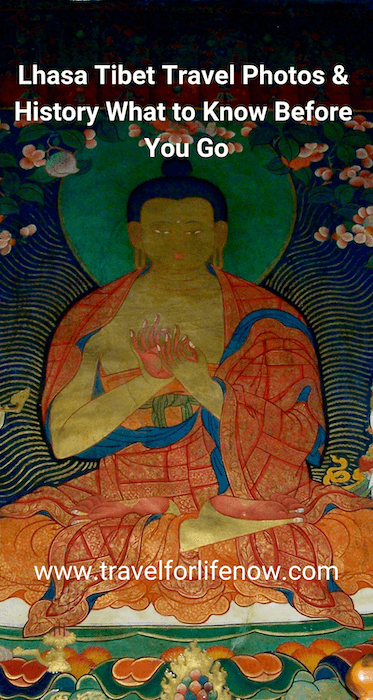 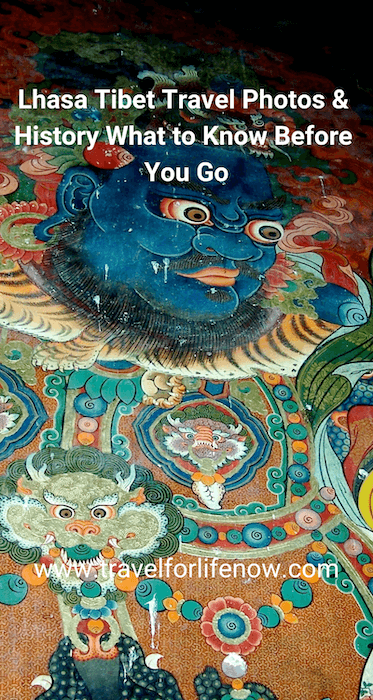 FOLLOW US ON INSTAGRAM
151 shares
We use cookies to ensure that we give you the best experience on our website. If you continue to use this site we will assume that you are happy with it.OkRead more