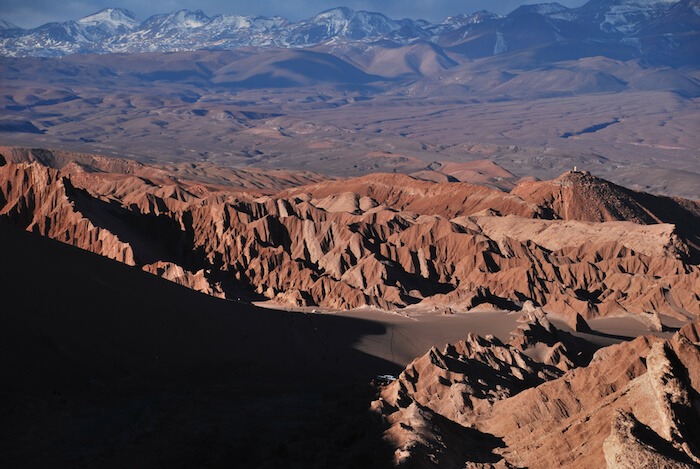 Why Go on a Visual Tour of San Pedro de Atacama? 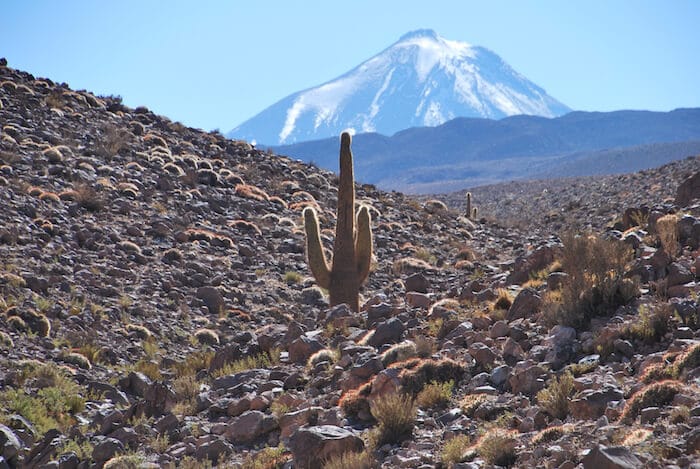 View of the Andes from San Pedro de Atacama

Located in the north of Chile, San Pedro De Atacama lies between the Andes and a coastal Mountain range.The Atacama Desert in Chile is one of the driest places on earth with an average annual rainfall of 15 mm a year. It spans 600 miles (1,000 km) long or 41,000 square miles. Like all deserts, temperatures vary widely from day to night–from 40º C (104º F) to 5º C (41º F) at night.

Our Chile Itinerary took us from Santiago to Valparaiso to Easter Island to San Pedro de Atacama. We expected to be amazed by Easter Island the the Moai. And, we were.

We did not know that the Atacama Desert would be equally stunning.

An hour’s drive (34 miles or 55 km) from San Pedro de Atacama, we arrived at Salar de Atacama–an enormous salt flat (1,200 square miles or 3,000 sq. km), full of flamingos. The first stop on our visual tour of San Pedro de Atacama. Our plan was to arrive just before sunset so we could film the flamingos as they took flight. They put on a show for us. It was beautiful to watch. 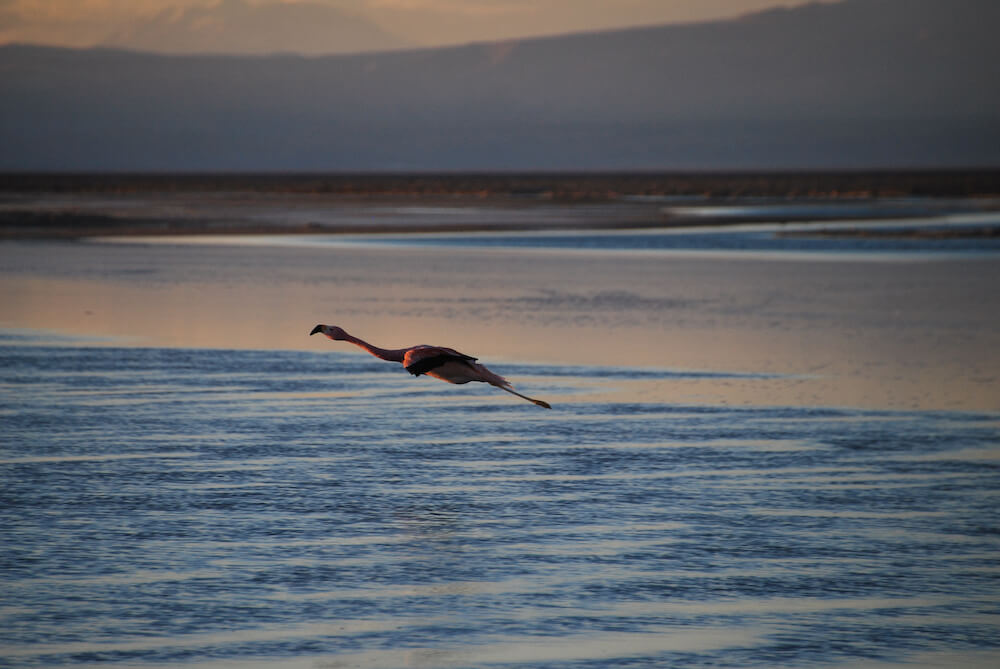 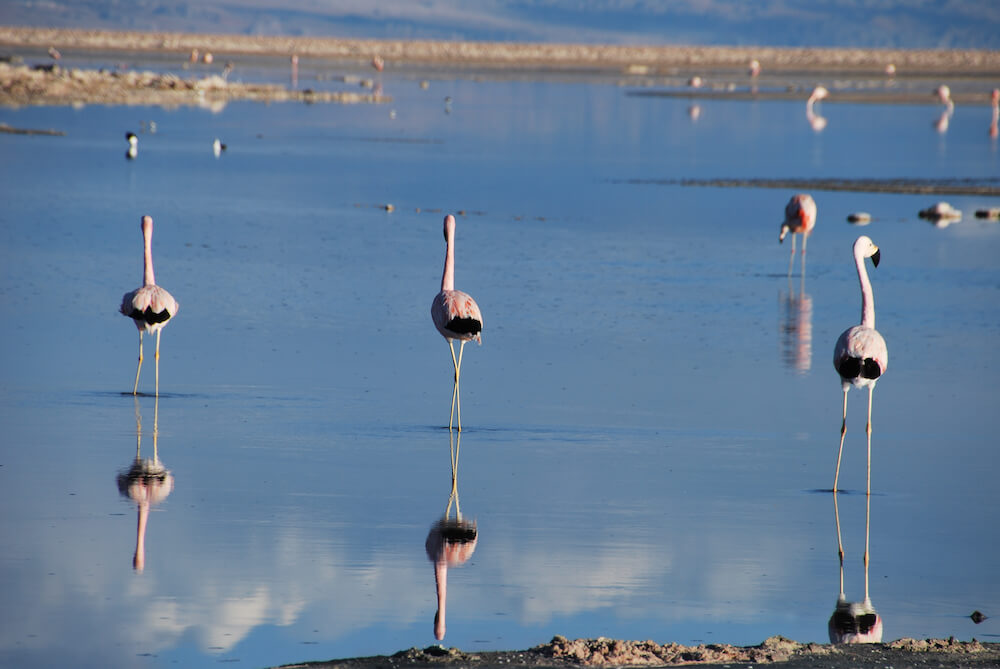 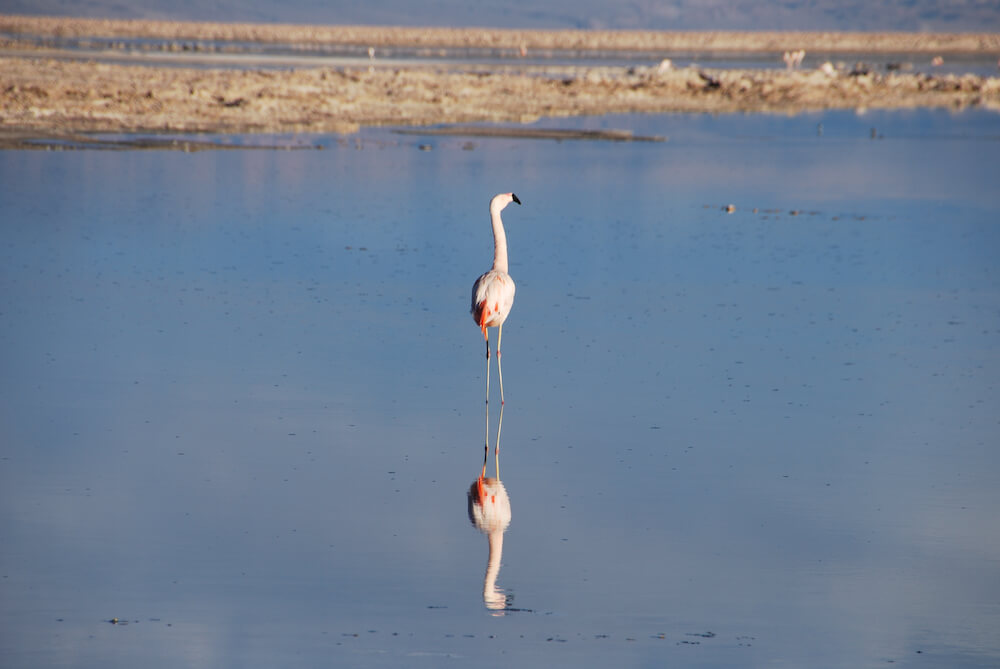 Next stop on our visual tour of San Pedro de Atacama was Moon Valley. A short drive outside of San Pedro de Atacama, we arrived at the Moon Valley or Valle de la Luna. Approximately 7,500 feet (2,500 km) above sea level, it really was like being on another planet. It is part of the Cordillera de la Sal or the Salt Mountain Range–a mountain range with a very high salt content. The rock formations and terrain were shaped by the wind and sand. 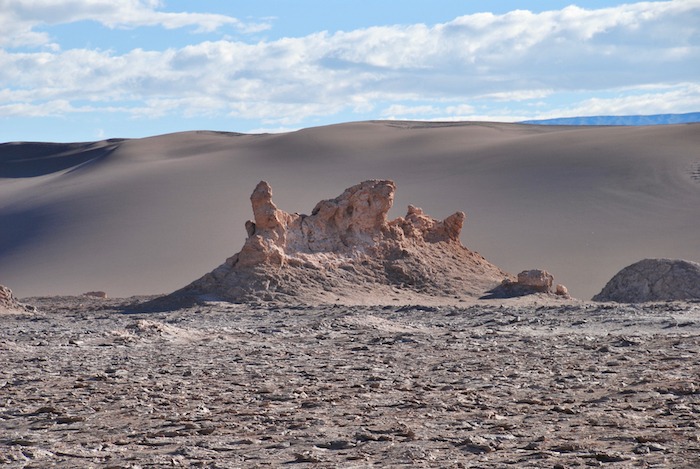 We set out with a guide for the 1.5 hour, very bumpy drive up the mountains. The Geysers are most powerful early in the morning and so we decided to photograph the geothermal field at that time. The fields are spread out and it was very interesting to walk through them. 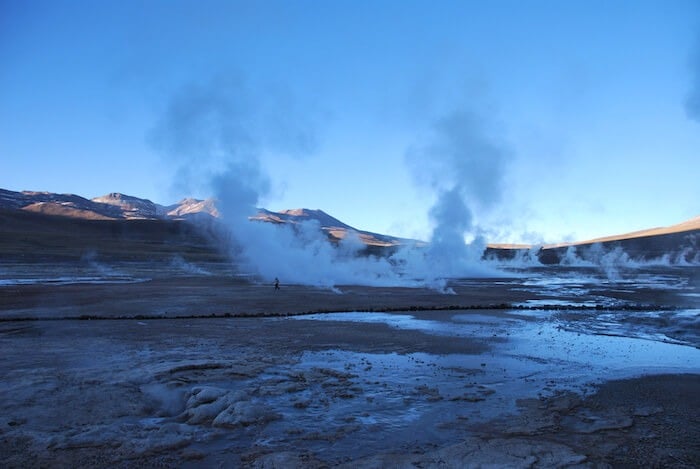 For more of our cold weather adventures, check out out trip chasing the Northern Lights: Tromso Northern Lights Tour in Winter–Was it Worth the Wait?

And, if you want to know what we should have brought to see the Geysers, read: Best Antartica and Winter Travel Packing List 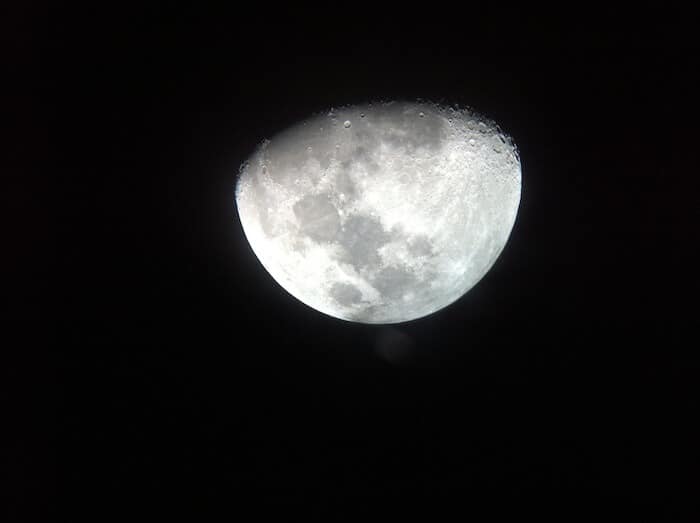 View of the Moon through a telescope

The desert is a great place to see the night sky. No visual tour of San Pedro de Atacama is complete without a trip to an observatory. The tour started at 10 pm and went arrived back at our hotel around 1 am. In between was magic. We listened to a lecture on the constellations of the Southern hemisphere-helpful for those of us from the North. Then we had a chance to peer through our own telescope at the moon and other planets. The picture above was taken through the telescope on an iPhone–our one regret was that we did not bring our DLSR.

Go Back 10,000 Years to See the Yerbas Buenas Petroglyphs 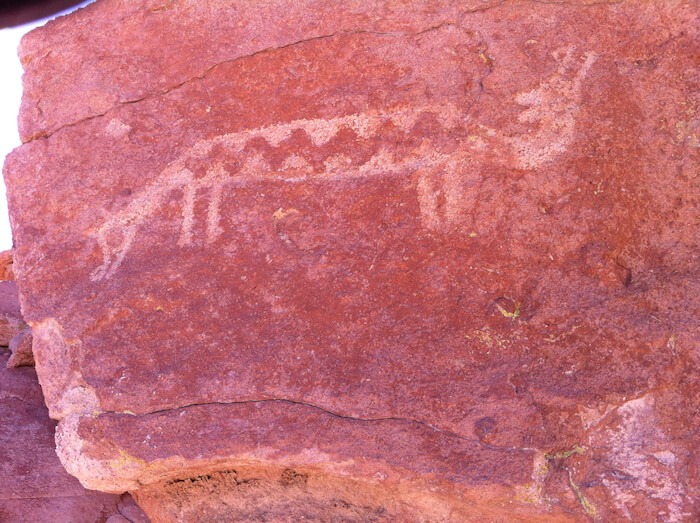 About 10,000 years ago, the Atacameno people lived in a fertile area. This was long before Atacama became a desert. The Yerbas Buenas Petroglyphs date from this era. There are many petroglyphs and we could have spent the entire day wandering around. We particularly liked this two-headed animal petroglyph.

A Mountain of Rainbows at Rainbow Valley 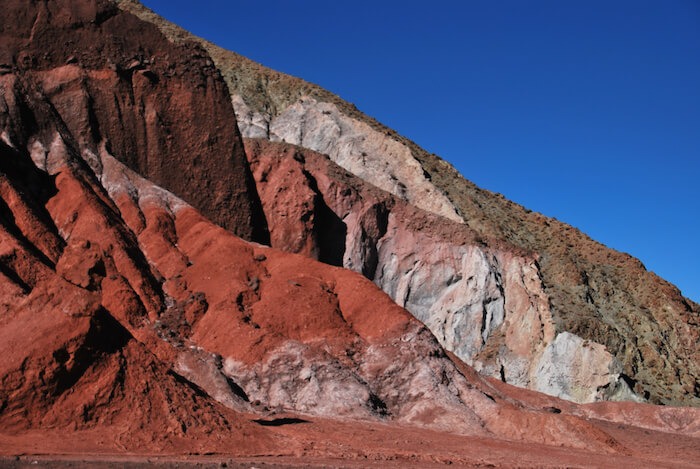 If you have visited the Painted Desert in the United States, Rainbow Mountains need to be part of your Visual Tour San Pedro de Atacama. The colors are vibrant and the mountains area shaped by wind into interesting shapes. We were there by ourselves and enjoyed a walk through the mountains. 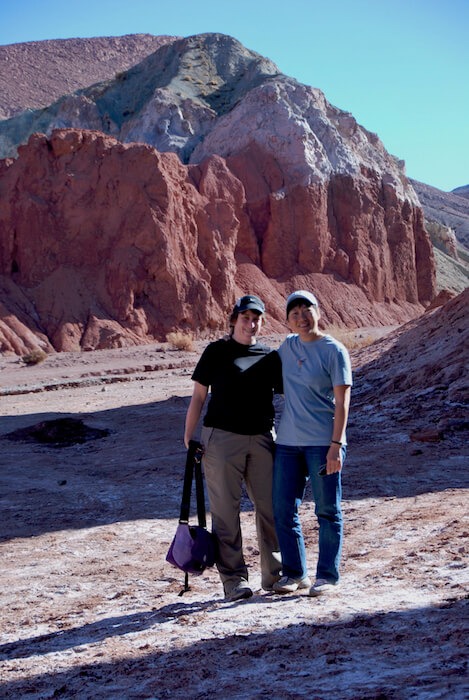 Sue and Reggie in Rainbow Valley

Pukara de Quitor was built by the Atacamenos in the 12th century as a defense against the Incas, and later, the Spaniards. It is a short 3 km walk from the center of San Pedro de Atacama. This fort had houses, shelters for animals, warehouses and other structures. Some people rent bikes to get there. The view from the fort is breathtaking, though that might have been from the climbing! 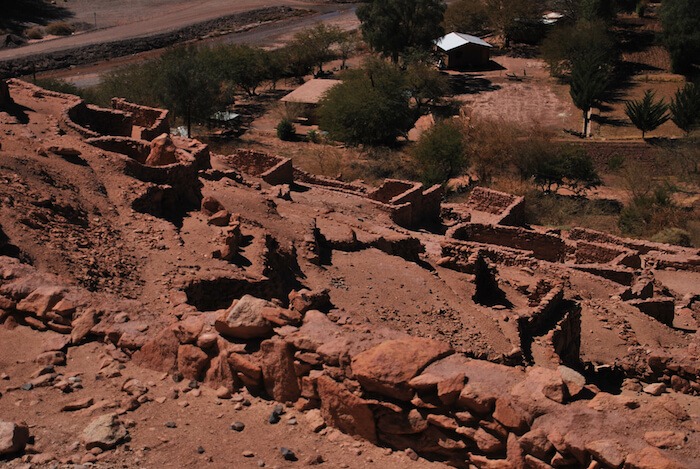 Have you been on a Visual Tour of San Pedro de Atacama? Leave a Comment. 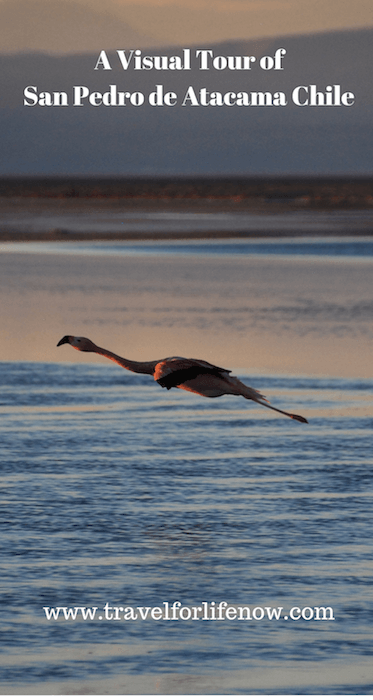 FOLLOW US ON INSTAGRAM
203 shares
We use cookies to ensure that we give you the best experience on our website. If you continue to use this site we will assume that you are happy with it.OkRead more