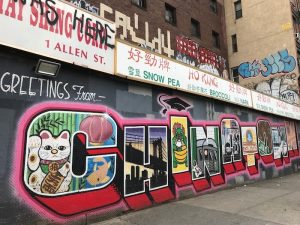 The Best Street Art and Dim Sum in Chinatown NYC

Dim sum literally means TOUCH THE HEART. In Hong Kong, the term yum char (or drink tea) also means to partake in dim sum. Street Art and Dim Sum in Chinatown NYC is a must-do if you are visiting New York. After you’ve eaten, you can take a stroll around to see some interesting street art.

What is Dim Sum?

Dim sum are small plates of bite size dumplings morsels of delicately wrapped shrimp, minced pork and vegetable in a rice flour based wrap. Dim sum is made for sharing. There are multiple pieces (usually 3 or 4) per small plate. The idea is to order as many dishes as you can since the portions are small and everyone gets to taste something different.

Where to eat Dim Sum in Chinatown NYC?

Yes there is a lot of shrimp in dim sum! 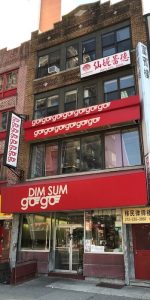 Dim Sum Go Go as the more delicate dim sum with the western influences, making this place asian fusion style dim sum. They use food coloring for creating their vegetable dumpling (sometimes with snow pea shoots which are excellent).

You order from the menu a la carte and tick off from a sheet given to you with items listed. The dim sum will be steamed and brought to the table in bamboo steamers as soon as they are ready.

They also have  noodles and other Chinese dishes.

Around the corner from Dim Sum Go Go, the Golden Unicorn is more traditional and most like a typical dim sum restaurant in Asia. The restaurant is on several levels but you’ll be waiting downstairs. If you go on a weekend, it is best to get there before 11:30 or you’ll be waiting at least 45 minutes.

When you arrive at the Golden Unicorn,  you will collect a number from the concierge stationed at a podium in the lobby. You tell her the number of people in your party and she assigns you a number. The, you wait for her to call your number. The number jumps around depending on the size of the table that just became available. Don’t be alarmed if a number long after yours is called before you.

Once your number Is called, you are sent to the floor for your table. When you arrive, someone will direct you to the table. They put a sheet for your orders on the table and a pot of tea. There is a good chance you will share a table especially if your party is small.

The atmosphere in Golden Unicorn is generally loud and hectic. There are servers pushing carts around and may people will be speaking Chinese (mainly Cantonese). You will need to beckon them over and to see what they have to offer and make your selection. You may need to be a little pushy. Once you have picked a dish, the server stamps your sheet (to account for the size and number of dishes you have been given).

There are typical dishes like siew mai (steamed meat dumplings) and har gow which are the staples of dim sum. The dumplings are on the greasier side and slightly larger or less refined. There’s the usual chicken feet, fried carrot cakes, spring rolls, etc.

Pins serves traditional dim sum but also specializes in seafood. It can sometimes be inundated with tour buses and it is best to get there early.  The food is excellent although not always consistent.  Pings also has a liquor license and serve other Chinese dishes as well.

Everything is vegetarian in this restaurant. There are dishes that look like they have meat but they are mock meats – mock duck, chicken, shrimp, etc. The dishes are on the greasier side due to the widespread use of oil for flavoring of the dishes.

Buddha Bodai serves vegetarian and vegan and has also been certified Kosher. Amazing taste and authentic looking, it is hard to tell the difference between real and mock meat.

Not in the Mood for Dim Sum? Try Hand Pulled Noodles 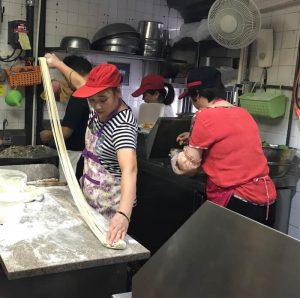 And for those who are looking for more than dim sum, how about some Tasty Hand-Pulled Noodles? Located at 1 Doyers St (between Bowery and Pell), this 8 table restaurant specializes in a few types of hand pulled noodles done in different ways – fried or in soup. Noodles are thin (pulled) or thick (knife cut) and served with vegetables and some type of meat (chicken, shrimp, pork or duck). Prices are cheap and portions are large. The noodles are amazed. We had fried noodles with duck and a side of sautéed baby bok choy.

In July, Doyers Street was painted and became a temporary pedestrian plaza. This are was a center of gang warfare in the early 19th century. Chen Dongfan painted The Song of Dragon and Flowers over 4800 square feet of asphalt. The walkway has become faded, but is worth seeing, There are 2 murals on the walls. One appears to be of Confucius. And the other, is by Gian Galang and depicts the Blood Angle (Doyers Street) which was once one of the deadliest street in the US.

Mural by by Gian Galang depicts the The Bloody Angle (Doyers Street) which was once the deadliest Street in US History. On Doyers Street.

Other Areas for Street Art in Chinatown

The area around Orchard and Canal has several murals that are worth seeing. One of a Subway Car by Argentian-born Sonni. The other is a Deli and Grocery Store window and is pretty amazing.

Or, take a side trip to Jersey to See Street Art. It’s only a short PATH (subway) ride. 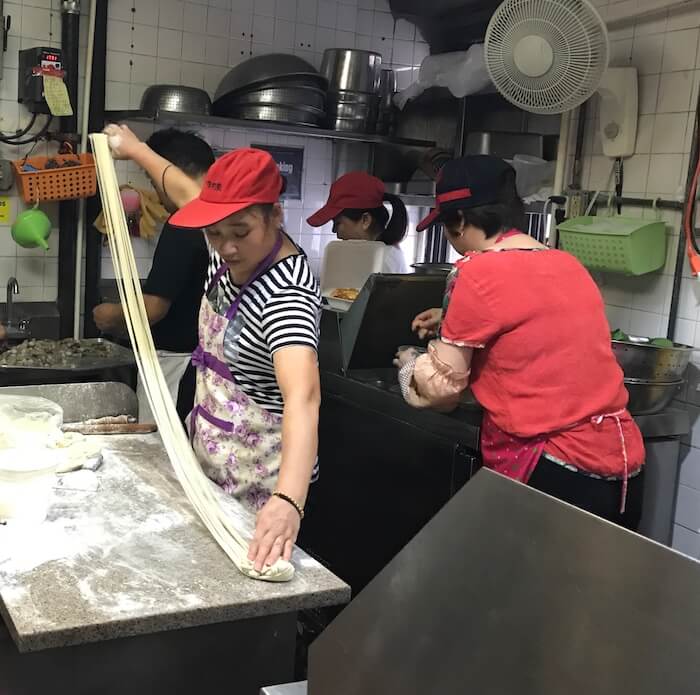