Why You Should See Thaipusam Singapore 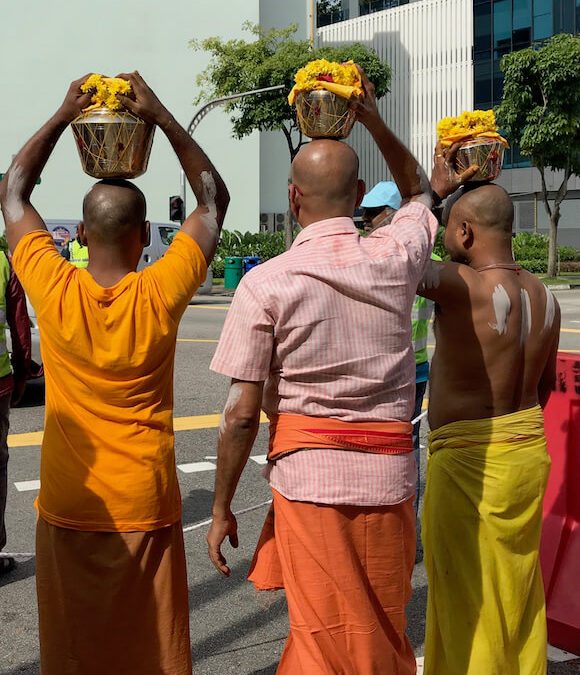 I had heard the stories about the Hindu Thaipusam Singapore. A frenetic Hindu ceremony where devotees carry huge kavadi. And, they have their backs, chests and cheeks pierced. A gruesome spectacle. So I was told. But, I wanted to see the actual Thaipusam Singapore, not be influenced by the stories of others.

I am really glad that I went. The Singapore Thaipusam that I observed was a serious and meaningful spiritual ceremony. The video below conveys some of the experience.

What struck me about Thaipusam Singapore was the preparation, teamwork and community. Preparations start months ahead, maybe even a lifetime ahead of the day. The devotees mostly traveled in groups. And, the men that carried the kavadis were surrounded by a team from start to finish. It was clearly a group effort. The community at the Temples was joyous, serious, and welcoming.

I came away from Thaipusam with a much deeper understanding and respect for the Hindu community and the devotees that participate in Hindu Thiapusam Singapore.

We watched the preparations at Sri Srinivasa Perumal Temple. It was a scene with music and praying, offerings and much excitement. There were many tourists in the Temple. I was very surprised that they welcomed non-Hindus into the Temple. After we left the Temple, we walked the 4.5 KM route and ended up at the Sri Thendayuthapani Temple.

We saw men and women, old, young and in between, show incredible strength, calmness, spirituality and dignity as they paid respect to Lord Murugan. And, the openness with which they allowed people like Reggie and me into the Temple at the beginning and end was surprising. They seemed to welcome us into the experience, though I am sure that this was not a unanimous feeling.

Read our Singapore Itinerary 4 Day for more to do on your trip to Singapore. 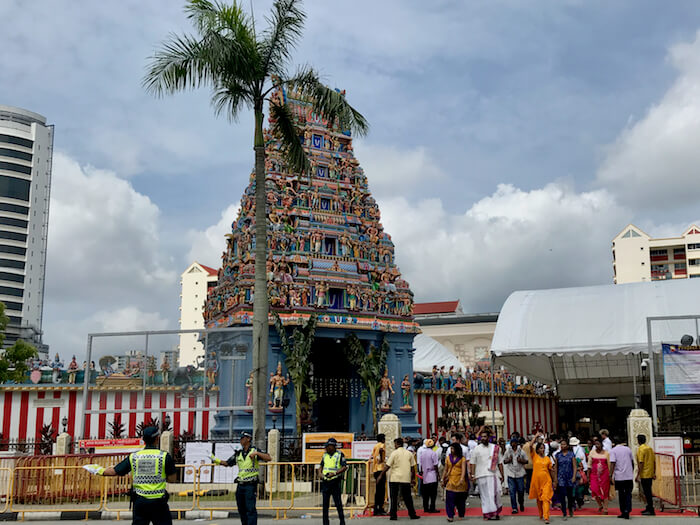 Singapore is very religiously diverse. There are 30 main Hindu Temples, more than 40 mosques, 30 Buddhist Temples, Taoist and other Chinese Temples, too many churches to count and 2 synagogues. In 2015, the religious make-up of Singapore was:

Hindus in Singapore date back to the 7th century. However, the majority were brought by the British in the early 1900s. In addition, there is a significant Hindu and Indian expat community in Singapore.

Thaipusam is a Tamil Hindu religious ceremony and tribute to the son of Shiva and the God of War, Lord Murugan (also known as Lord Subramaniam). It takes place on the date of his vanquishing of the demon Soorapadman. The date is determined by the Hindu lunar calendar, so varies year to year. After Lord Murugan vanquished the demon, he appeared mounted on a peacock with a golden spear (or vel).

In addition to battling evil, Lord Murugan is believed to grant favors. As a result, Thaipusam is a day of prayer, penance, thanksgiving and offerings to Lord Murugan. 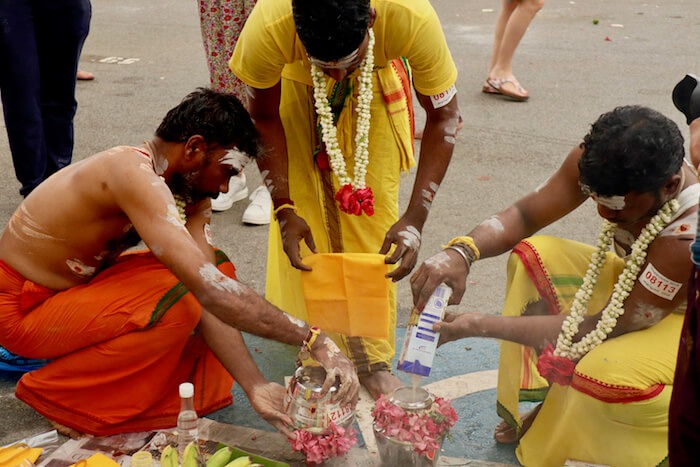 Women and men carry milk pots (palkuddan) on their heads as an offering to Lord Murugan. We didn’t see any women carrying kavadi, though we saw some with their tongues and cheeks pierced. Some people just walk the route. Most were barefoot. Others walked the route in sandals with a bed of nails.

Sri Lanka has Temples. Check our experience of Poya Day at the Anuradhapira Ruins in Sri Lanka.

Preparation for Singapore Thaispusam begins 48 days before the ceremony. Devotees that plan to carry a kavadi must purify themselves physically and spiritually by praying continuously, fasting or eating only once a day (vegetarian meals) and abstaining from sex. They also fast for 24 hours the day before Thaipusam. 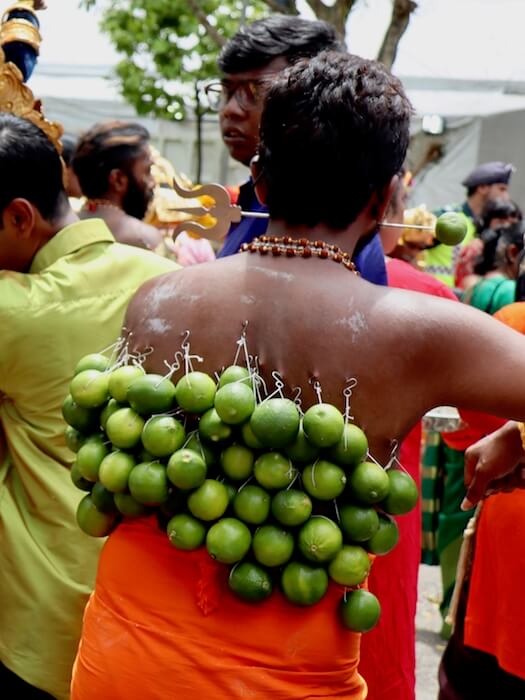 The Night Before Thaipusam

After prayers and just past midnight, the first groups with milk pots leave for Thendayuthapani Temple. At that time, the first Kevadi bearers begin preparation. 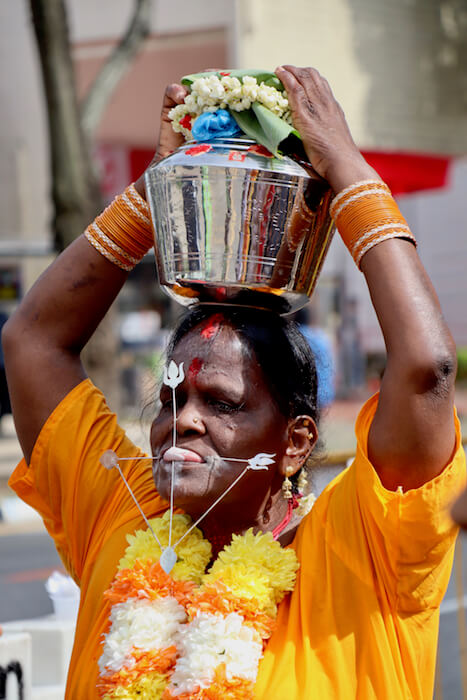 Woman Milk Pot Bearer with her Tongue and Cheeks Pierced

There are many reasons that devotees decide to carry a kavadi. Some do it to keep a vow, others to ask for forgiveness or to offer thanks. It is a deeply spiritual decision.

The kavadis can be simple or very elaborate. Some kavadis are short wooden poles with an arch with Lord Murugan and other deities attached and a small pot of milk on each end. The larger kavadis are attached to the devotees’ body with chains and hooks. They can be several meters tall.

Kavadis can involve a hundred piercings or just a few. The piercings and hooks represent a physical burden through which the devotees ask Lord Murugan for help. 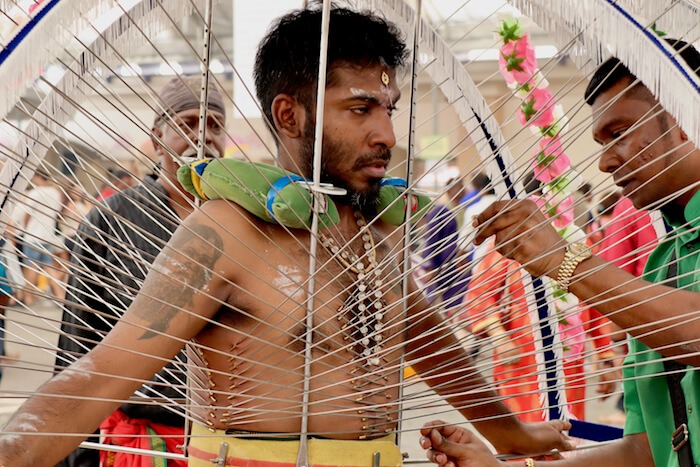 We watch many of the men preparing to carry the kavadi. They began by praying and giving offerings. Then the first part of the kavadi was put on. Some of the men appeared very peaceful and prayed throughout the process. The praying is supposed to put them into a trance so they do not feel pain. Some seemed to experience pain, others not. We also did not see much bleeding with any of the piercings. The tongue piercings were hard to watch. We were told by many people that it doesn’t hurt.

We walked the 4.5 KM route. Some kavadi bearers seemed to have no problem with the route, while others struggled some. It was a hot day and by the end, all of the kavadi bearers were clearly drained. Their teams fanned them and gave them water to help them through the last steps to the Temple.

This was one of the largest kavadi that we saw. This is near the end of the route and he is sitting on a stool while waiting for the people in front to move.

At the end, we accidentally were caught up in the crowd going into Sri Thendayuthapani Temple. There was no way for us to get out of the crowd, so we walked towards the Temple. Before entering the Temple, we had to take off our shoes. Most of the devotees walked the route barefoot whether they carried Milk Pots, Kavadi or accompanied others,  We were given bags for our shoes. The Temple was crowded and noisy and exciting. Milk, from all of the offerings, was being poured on Lord Murugan. People were cheering and chanting as the Kavadi bearers arrived.

Kavadis and milk bearers were continually entering. Once they entered, Temple, they twirled and shouted and chanted as they passed by Lord Murugan.

Then they went to an area to have the kavadi taken off and the piercings removed. They were clearly exhausted, and it was time for us to leave.

The procession of kavadi bearers begins at the Sri Srinivasa Perumal Temple at 397 Serangoon Road and ends at the Sri Thendayuthapani Temple at 15 Tank Road. The entire route measures 4.5 km.

You can watch the preparations at Sri Srinivasa Perumal Temple. It is a scene with a lot of tourists taking pictures. We arrived around 10 am when it was less crowded.

Where to See Thaipusam

We recommend that you see Hindu Thaipusam Singapore sometime during your travels. It takes place in cities that have a large Tamil Hindi populations– India, Sri Lanka, Indonesia, Singapore and many other places.

In Southeast Asia, one the largest ceremonies take place in Kuala Lumpur at the Batu Caves. That ceremony reportedly draws 1 million people, so you have to be prepared for the crowds and get there very early.

In Penang, the Thaipusam is smaller. It starts at Kovil Veedu (House Temple) in the centre of Georgetown, and terminates at Nattukkottai Chettiar Temple on Waterfall Road, 6km away.

Unless you love huge crowds, we recommend Thaispusam in a smaller city like Singapore or Penang.

In Singapore, you can observe the festivities the night before. You can go early in the morning as the procession starts in the middle of the night. We opted to go at 10 am to avoid the crowds on the route and at Sri Srinivasa Perumal Temple. Best way to get to Sri Srinivasa Perumal Temple is to take the MRT to Farrer Park station where the temple is just a few steps away.

The last kavadi is required to leave Sri Srinivasa Perumal Temple by 5 pm and arrive at Thendayuthapani Temple by 11 pm.

Have you been to Thaipusam? Another Hindu Ceremony? Leave a Comment about Thaipusam. Do you want to see it? 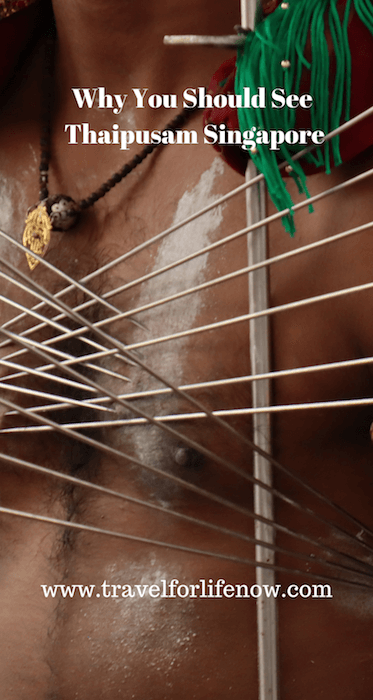 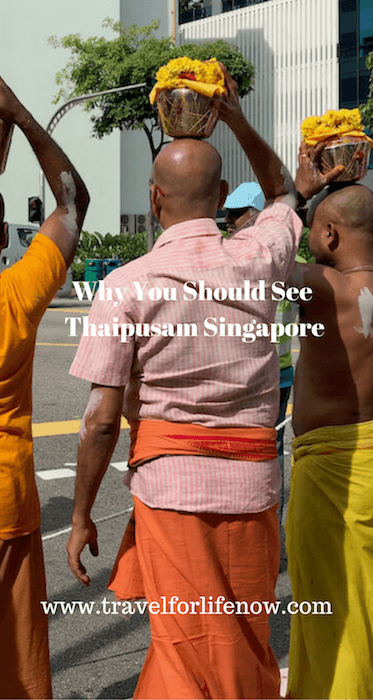 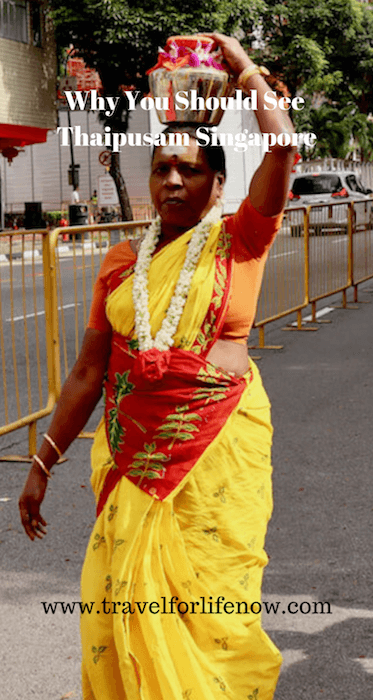 FOLLOW US ON INSTAGRAM
157 shares
We use cookies to ensure that we give you the best experience on our website. If you continue to use this site we will assume that you are happy with it.OkRead more